Ever get tired of ordering the same old things at the drive-thru? Why not mix it up, introducing you to the world of secret menus.

From a bit of DIY, to some exclusive dishes, here’s some of the best secret menu items we’ve discovered, and we’re letting you into them all… If you’re partial to a bit of heat, then you’ll love the Spicy Char from Chick-fil-A. This burger brings the heat with its char-grilled, seasoned-to-perfection chicken, served on a bun alongside toasted dill pickle chips. It’s a secret worth sharing! In-N-Out is always a winner, right? Well, let us let you into a little secret they’ve been keeping- the 4×4; a tasty twist on the classic cheeseburger but with FOUR patties. You can order a 2×2, a 3×3, but the 4×4 is ultimately where it’s at! This is plain and simply, a classic hamburger but without the added extras of onions and mustard (does anyone actually like mustard?) With the pickles left firmly on the burger, this is a secret menu item to ask for if you’re looking for a timeless, American classic. This is one of the chain’s most popular and requested secret menu items. It consists of half steamed lemonade, half hot water and a tea bag of both citrus mint tea and peach herbal tea. It’s an absolute winner for us! This is the perfect beverage for a summer’s day… We already know that Taco Bell’s infamous quesadillas are some of the best on the fast-food market, but there’s always room for improvement. TIP: ask for it to be grilled TWICE, making it extra crispy and extra tasty. I bet you didn’t know you could get a grilled cheese from your local McDonald’s, did you? This is one of Ronald’s most well-kept secrets: you basically request for a slice or two of cheese to be grilled between their tasty buns, and you get yourself a grilled cheese, McDonald’s style. 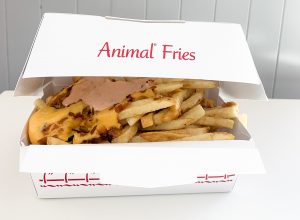 These sound a little intimidating, but hear us out, it’s not what it seems. The fry boxes are topped with American cheese, caramelized onions and their signature sauce. You just can’t beat a good old French fry, especially one covered in delicious toppings! And, to match… you guessed it, the animal burger. Simply ask for their classic cheeseburger with the tasty additions of caramelized onions and their signature burger sauce. You can’t beat an In-N-Out burger in my eyes! This has always been on the kids’ menu, but if you’re just fancying a lighter snack yourself, then why not order a single taco for yourself. Basically a lighter, healthier (?) version of their classic, that won’t leave you feeling as full or guilty. This is basically what it says on the tin: order a plain mcflurry and ask for one of their delicious cookies to be sprinkled in. You can keep it subtle with half a cookie, or go all in and have the full cookie mixed in! We won’t be judging you- that’s what we’d do! Who else loves Panera? This one’s kept on the down-low, but let me share it with you. This delicious AND nutritious bowl is filled with turkey, pesto, egg whites, roasted peppers and baby spinach. Basically ask for those ingredients together, and this is what you’ll get… Their traditional bowls include creamy mashed potatoes, corn, crispy chicken bites, gravy and shredded cheese. Well, you can build it how you like, by chopping and changing whichever ingredient you want with another of your choice. Don’t be afraid to ask! Not all secret menu items have to be assembled by the staff, you can do a bit of DIY! Try this: simply order an egg McMuffin and a hash brown, then combine them together in a juicy tower of goodness. I could eat this everyday for the rest of my life… Another Panera secret- classic! This one combines free-range chicken, hummus, baby spinach, cucumbers, tomatoes, red onions, lemon juice and chopped cilantro. Pick and choose the ingredients you want in there yourself. Did you know you can order a matcha tea, both hot and cold? You can order this refreshing drink in a latte or frappuccino form- both are equally as nice to us! Match has really increased in popularity recently, so all your local Starbucks should stock it! If you’re struggling to decide which flavour to go for, why not order all three? Get your hands on a vanilla, chocolate and strawberry cocktail that will satisfy all your flavour cravings! Yummmmm. We like to let you in on some of the healthier fast-food options, so here’s another salad one for you. Ask for turkey, romaine lettuce, baby spinach, tomatoes, red onions, olives, olive oil and lemon and let your tastebuds explode with this Mediterranean inspired dish. Wanting a quick, but tasty fix after working hard at the gym, but don’t want to ruin all your hard-work completely- say hello to the lettuce burger. Basically giant lettuce leaves replace the usual burger buns, but let us tell you- don’t knock this until you try it. It’s lighter, but JUST as tasty. Stuck between the Filet-O-Fish and a cheeseburger? It’s sometimes hard to decide in a panic while you’re going through the drive-thru, so- why not marry the two together? Order both, then add the Filet-o-fish underneath the cheeseburger. Seems odd, but tastes amazing… Another lettuce creation, trust us- these are underrated! This order comes with lemon and pesto- topped sirloin, cucumbers, onions, tomatoes and lettuce that acts as the ‘wrap’. A nice light lunch that won’t leave you feeling sick and lethargic! Just look at the color of this! Get this one by grabbing a pack of blueberries from their refrigerator and hand it to the barista to blend with whey protein, ice and either milk or water. Simple, but saves you the time and mess! The worst part is the washing up, after all… Combine the 3 classics here: Fillet-O-Fish, McChicken sandwich and cheeseburger and you’ll get a Big Mac style stack! It might be hard to dig into, but the taste is so worth it. You’ll be wanting more and more of this one! After a workout, it’s handy to be able to grab yourself a smoothie rather than making it yourself. This one will give you a rush of energy with the shot of espresso, whey protein, banana, ice and water. Simple, but sweet! Chipotle use fresh cilantro in their famous guac, so we know they always have it to hand. So, why not take advantage and ask for it to be added to any meal you’re wanting it on? The worse they can say is no, but let’s be honest, what’s a few cilantro leaves between friends?! This one might have a questionable name, but it basically consists of two slices of cheese between two burger patties. If you’re cutting down on the carbs, but still wanting to indulge, this is the perfect option for you. Quesadillas aren’t actually listed on the kids’ menu. But, parents- if your little one is wanting to copy you (as always), all you have to do it ask and they’ll fold a burrito tortilla in half to make a quesadilla fit for a little one! They’ll give you a minute of peace then… Can’t decide between breakfast or lunch, you can always build your own BRUNCH burger. We’d say brunch is our favourite meal of the day. Just order a double burger and add an egg and hash brown. Wow. We think this one is genius. Messy, but genius… Typically Starbucks offer the classics whole grain option (topped with dried fruit and nuts and brown sugar) and the blueberry version (topped with blueberries and agave syrup). You can instead order plain oatmeal and customise the toppings with a banana and cinnamon from the sugar station. You can assemble this one yourself at the Coke Freestyle Machine. Just pour a bit of soda (in this case, orange Fanta will be perfect), over your soft-serve and there you have it- a Fanta- Float. This is the perfecct summer’s day cooler, which also tastes AMAZING. Why have I not thought of this one before?! Combine two of your favourite McDonald’s orders in this perfect blend. You can either sprinkle the pie on top, or try dipping it into the ice cream. Let us know if you try any of these secret menu items! Enjoy..