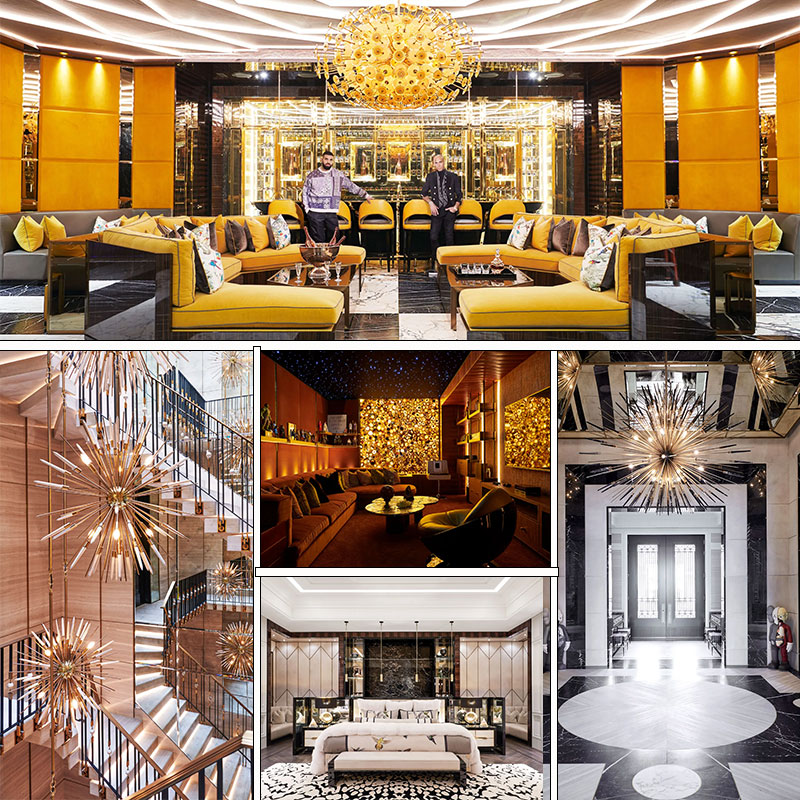 The Toronto-born rapper owns an array of homes around the US, but his manor house in Canada is one to remember. Dubbed ‘The Embassy’, the house takes its cue from tradition beaux arts with a slight contemporary feel.

“In form, materials, and execution, the structure is a proper 19th-century limestone mansion. But the exterior profiles are more minimal and the lines are a bit cleaner,” says Rafauli, who runs a luxury design and build firm, based in Ontario. Like her sister’s, Kylie enjoys the finer things in life. The Self-proclaimed ‘Self-made billionaire’ decided to treat herself to a brand new home during lockdown, where she and daughter Stormi spent their time during the pandemic. The 272 acre mansion is located in Holmby Hills, LA – the property boasts 7 bedrooms, 14 bathrooms, an outdoor projection screen for movie nights & an indoor home theatre. 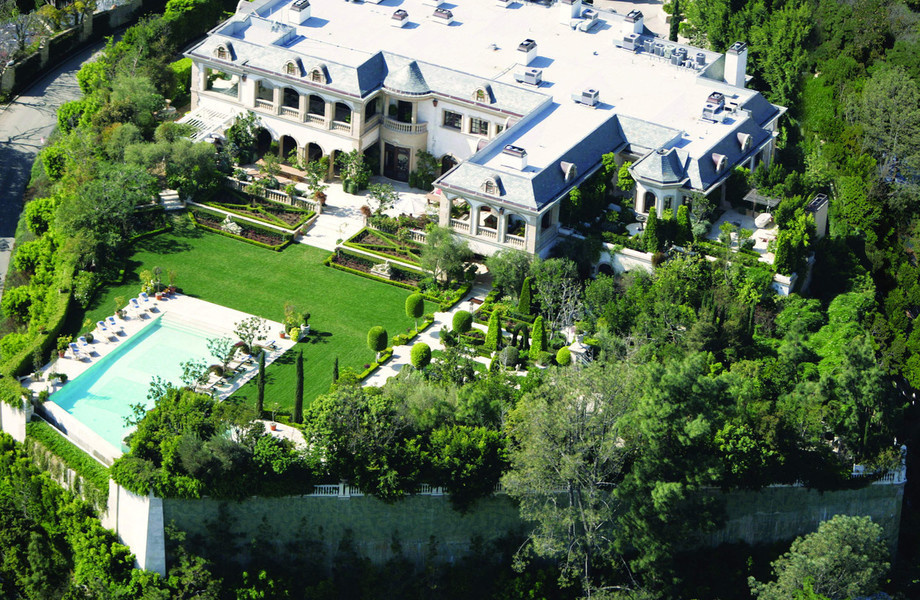 Gigi, Bella & Anwar’s Palestinian-born father Mohamed is a real estate tycoon over in LA so he’s no stranger to opulent properties, like his Bel Air mansion. His home offers 10 bedrooms, 15 bathrooms, a formal outdoor bath, a ballroom that seats 200-250 people, an elevator, a Turkish hammam, a swan pond and 8 rose gardens…need I say any more? His lavish home is featured on some of the earlier episodes of the Real Housewives of Beverley Hills. Mary – Kate & her hubby Olivier Sarkozy put most other New York homes to shame with their city mansion. The stunning home has 22-foot ceilings (holy-moly), seven fireplaces, an elevator, an artist’s studio AND a ballroom. Ooh-Laa laa. Considering they’re living in the concrete jungle that is New York City, they’re doing alright for themselves when it comes to space aren’t they! 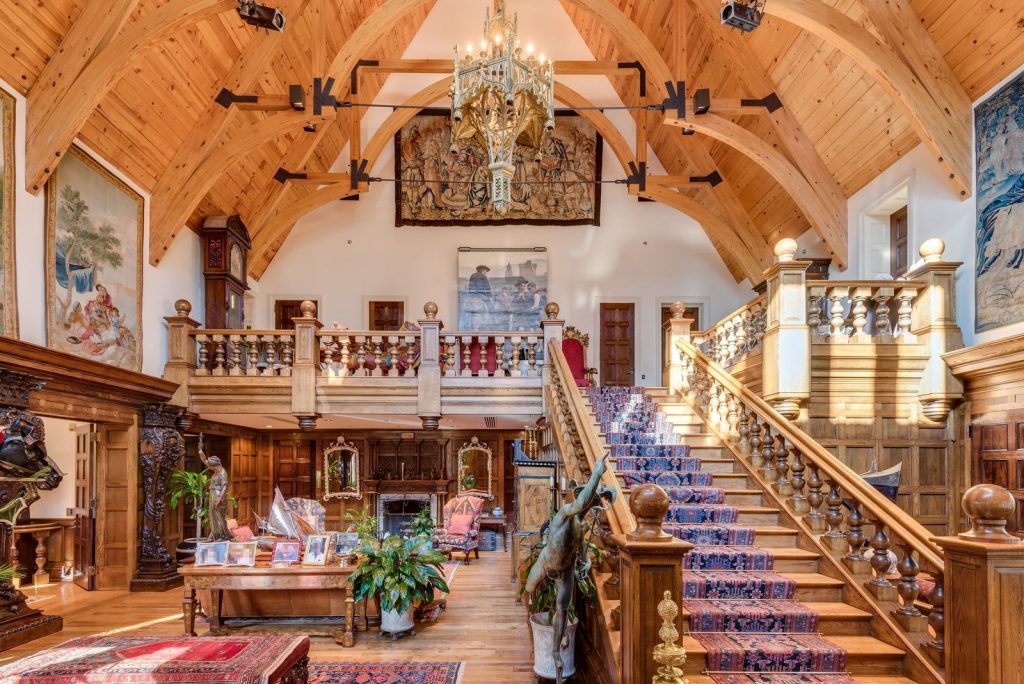 Before their split, Brangelina’s $55 million Long Island mansion was used as their vacation home. The 25 bedroom (yes, you read that correctly) home also included two guest houses, a log cabin and a beach cabana. But just incase that wasn’t good enough for them, they also had a private beach, a suits of armour & a pier that could accommodate a yacht – you know, just incase some of their rich friends wanted to pop by! 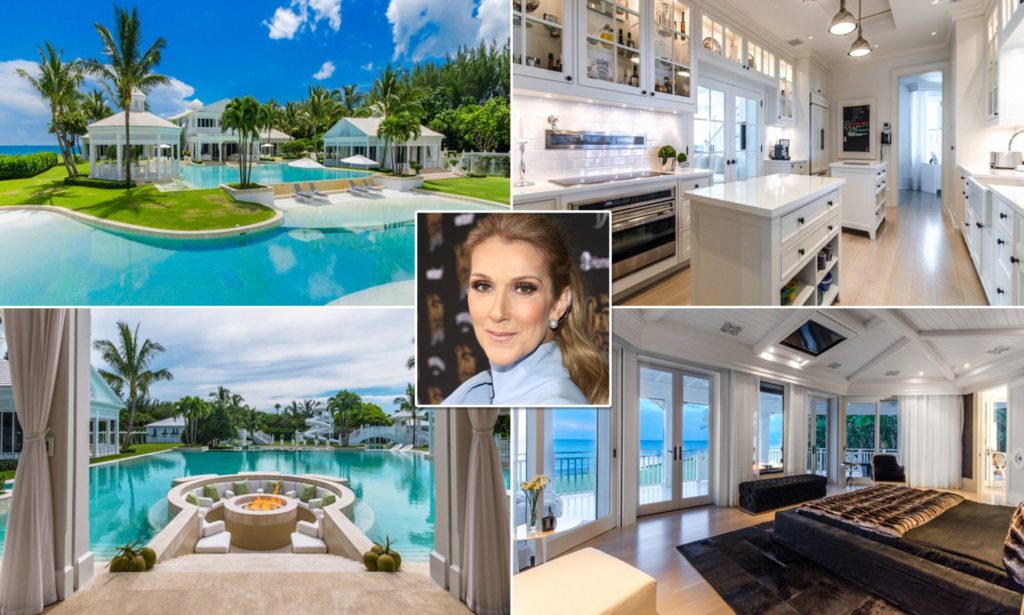 The Queen herself, Celine Dion, obviously didn’t do anything by halves when it came to her Florida home. The estate used to have a water park (OMG), three pools and a golf range which she built & designed herself. She put the home up for sale in 2014 for $62.5 million. 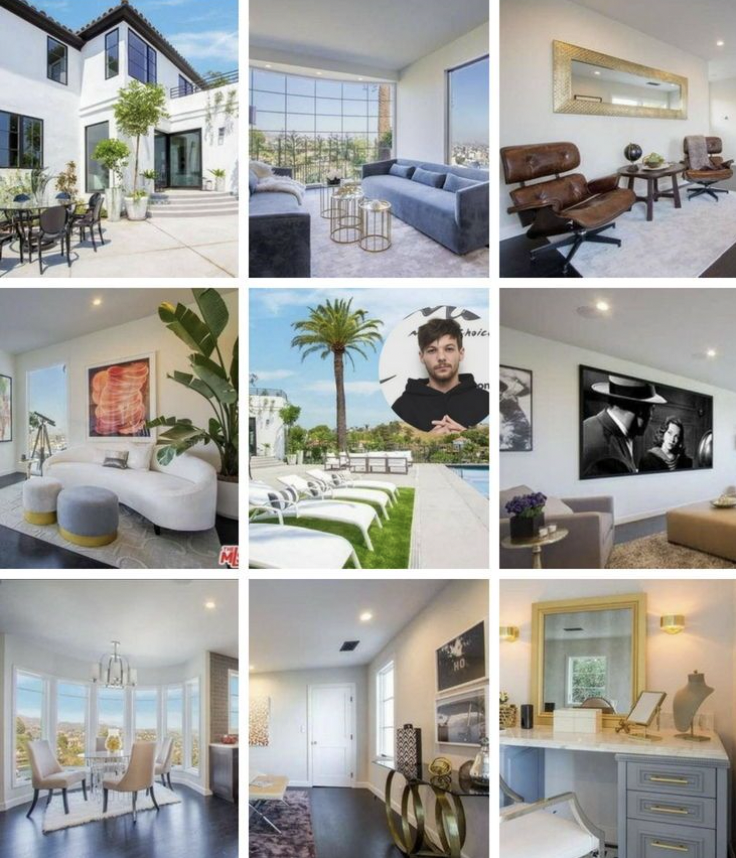 The former One Directioner settled down in Hollywood alongside some of her fellow bandmates. His chic contemporary 2-storey mansion is estimated at just under $7 million with 4 bedrooms & five bathrooms, there’s plenty of space for the singer to live comfortably. 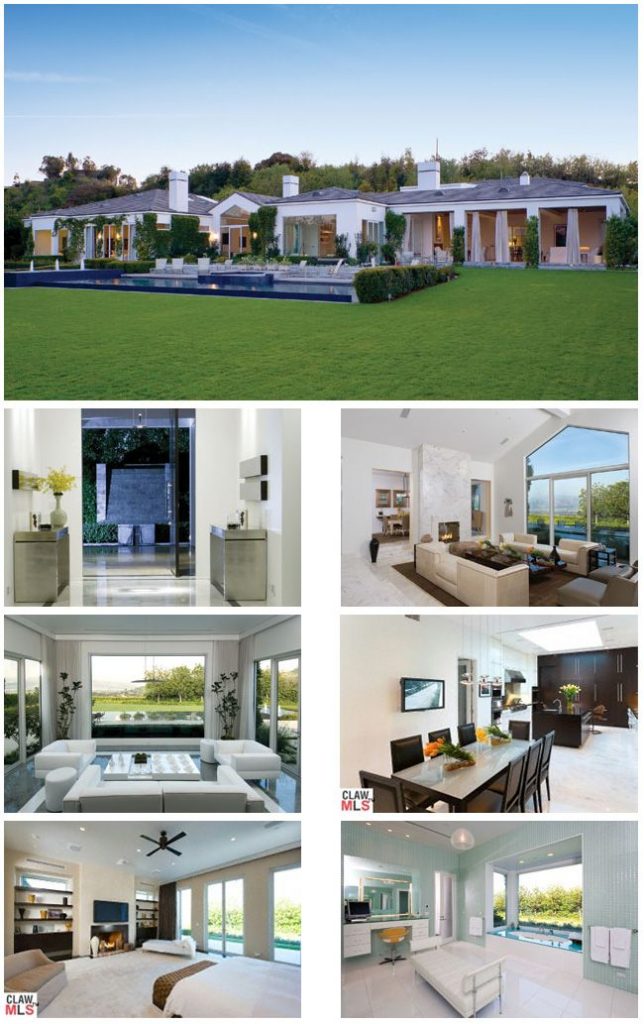 Gwen Stefani’s always had a quirky side to her, and her Beverly Hill home is a perfect reflection of her personality. There’s lots of bright colors, light being let in from wall-length windows & marble accents, the 7-bedroom house includes a giant pool, a gym and a tennis court. 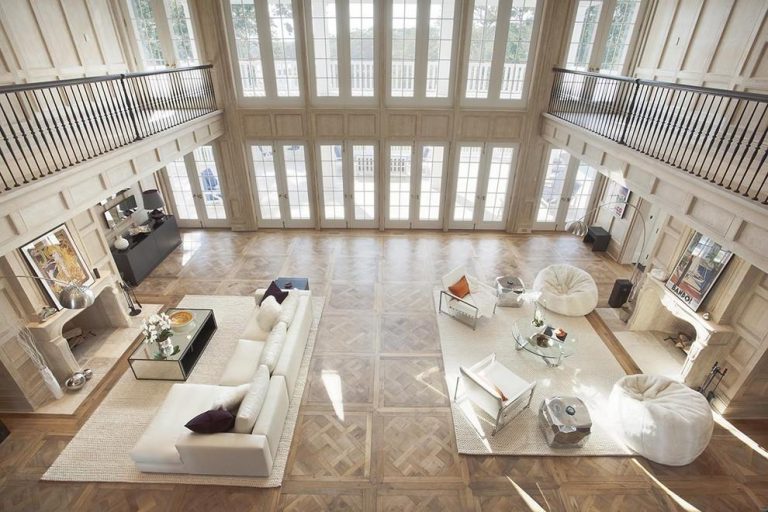 Queen Bey & her man Jay-Z own their fair share of homes all over the world but their East Hampton vacation home is truly unmatched. With seven bedrooms, nine bathrooms and a guest house – they’re certainly not short of space – plus the extravagant residence faces a 17-acre nature preserve. Located in the star-studded neighbourhood of Calabasas, the estate was completed in 2010 and has some impressive facilities, including basketball, volleyball & tennis courts as well as it’s very own lake and outdoor pool. The nine bedroom mansion also has a meditation lounge, pool room, home theatre and a recording studio where their daughter Willow recorded her hit single Whip My Hair. 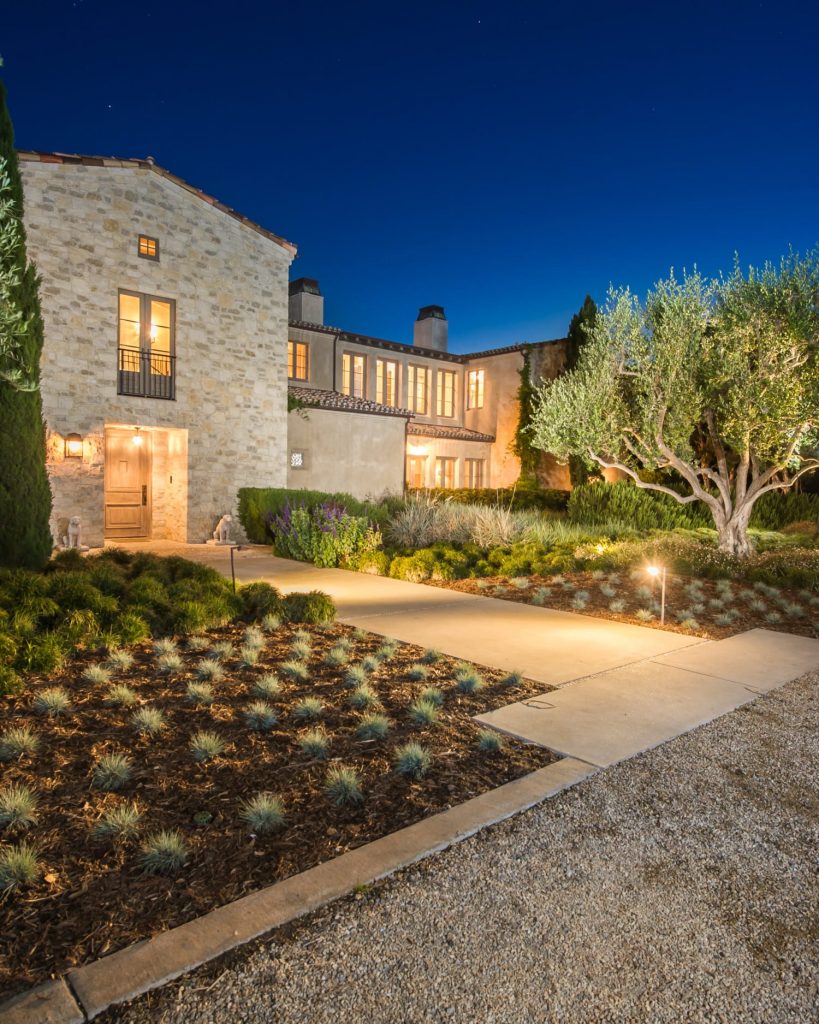 Okay, so here’s another celebrity who’s appeared on Vogue’s 73 questions, so if you’re wanting to snoop around her house, you might want to go check it out on there. The hispanic-looking Malibu home boasts 6 acres, an 8-horse stable, a ‘custom safe room’ & a two-lane bowling alley. Talk about unique selling points! 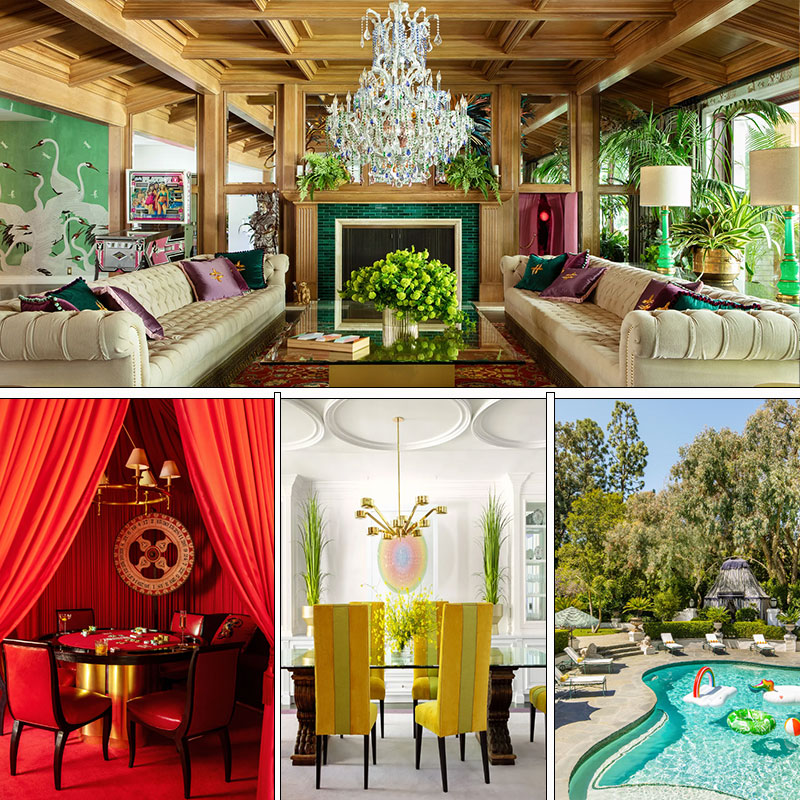 With a ball pit and costume room, supermodel & actress Cara Delevingne has created her very own Wonderland in LA.

“My work requires me to put on many different hats and costumes. I love slipping into these various characters, so I wanted my home to reflect lots of different themes and moods,” says the supermodel. 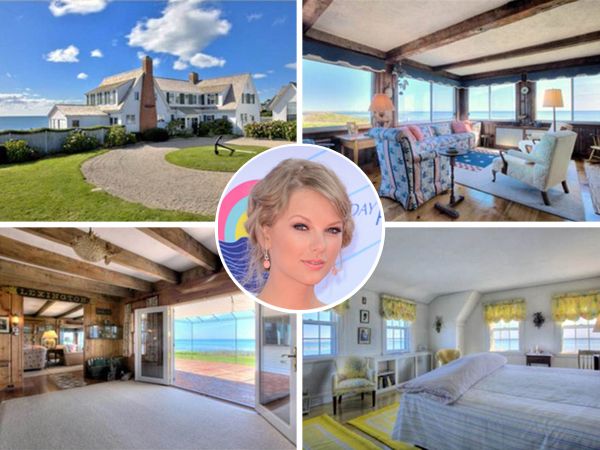 Blonde bombshell Taylor Swift owns not just 1, not 2 or 3 but EIGHT homes, including multiple penthouses in New York City (oh to see how the other half live!), three homes in LA, a condo & an estate in Tennessee & her best known picturesque beach home in Rhode Island. This is the home where she hosts her famous 4th July parties. 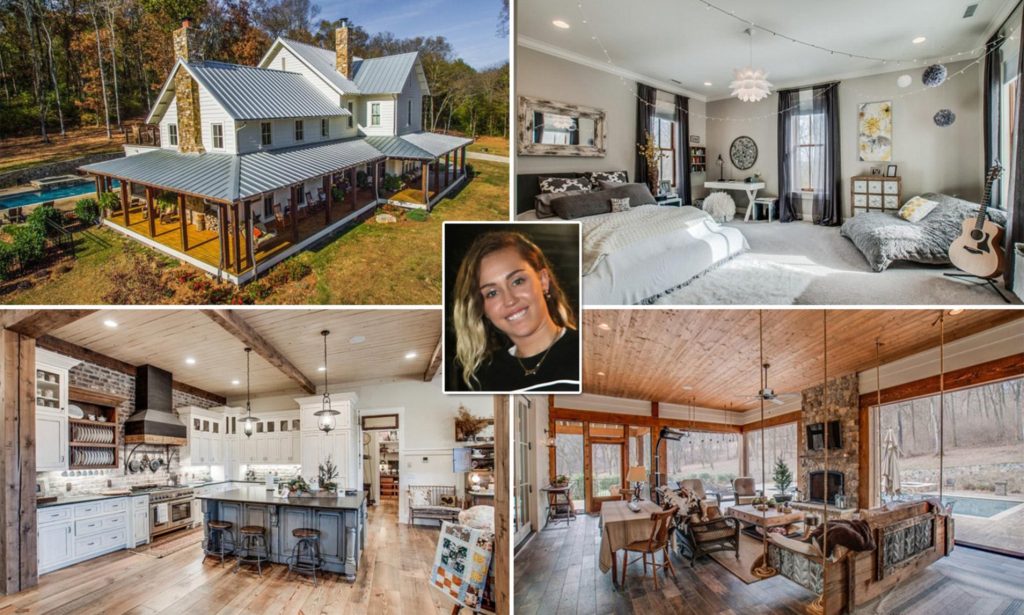 Like Taylor, Miley chose to buy this country style mansion in Tennessee. This gorgeous rustic home sits on 33 acres & includes a mini-golf course. Unfortunately for Miley, her 5 bedroom home was broken into and burglars managed to get away with hundreds of thousands of dollars worth of her jewellery. 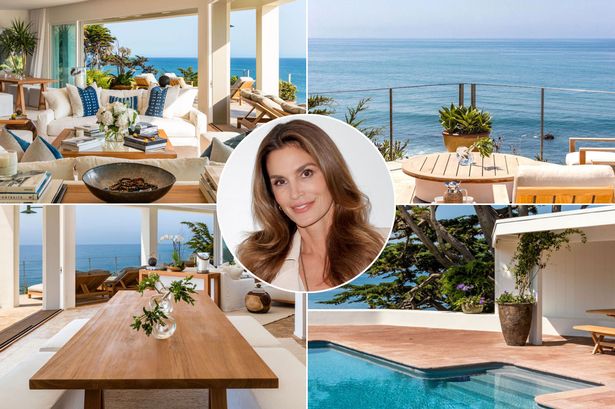 90s Supermodel Cindy Crawford & her husband Randy Gerber’s luxury oceanfront Malibu mansion is just completely insane and could be up there with one of the nicest celeb homes ever. Crawford designed the four bedroom home herself. The estate sits on three acres of land and a private path to the beach. 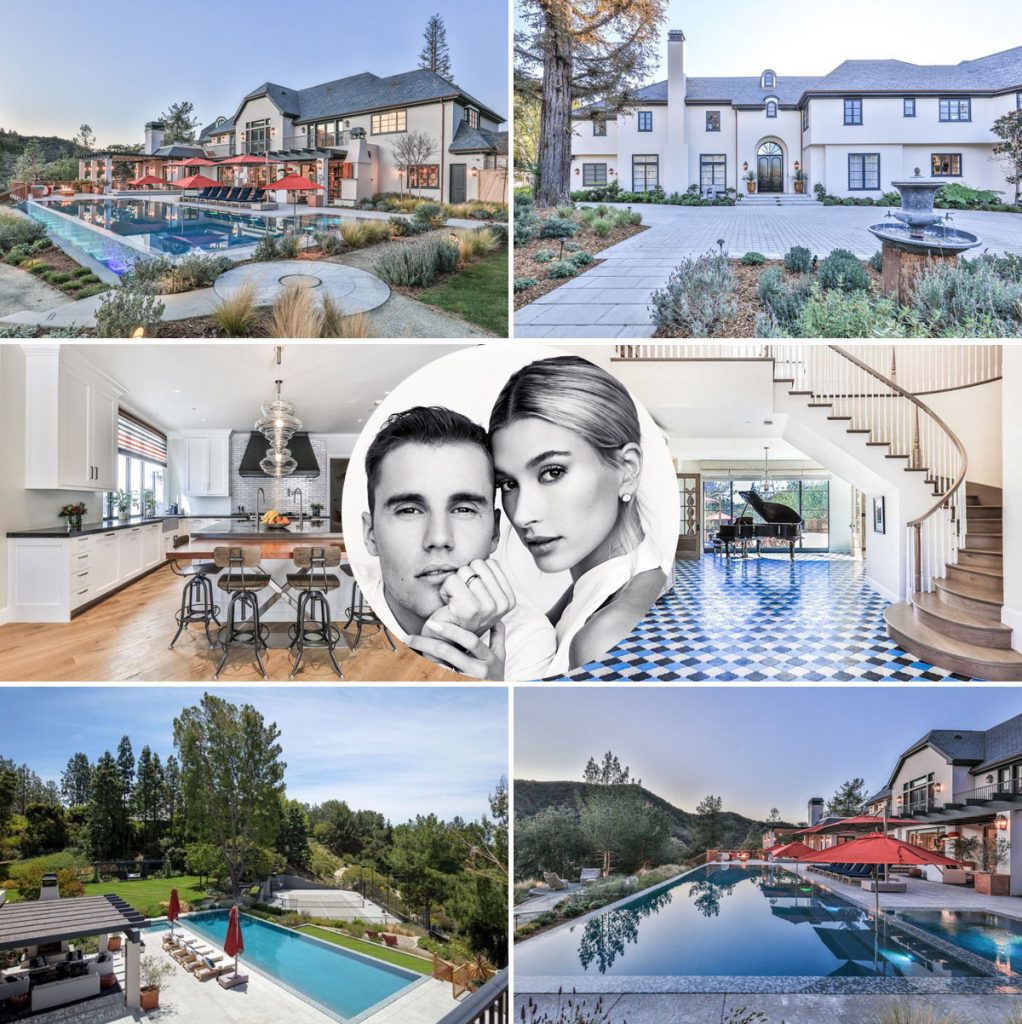 This gorgeous couple moved into their Beverly Hills mansion right before they decided to tie the knot. Obviously, they added their own quirky touch to the place by installing plenty of arcade games, skateboards and a huge photo of them smooching on the wall. 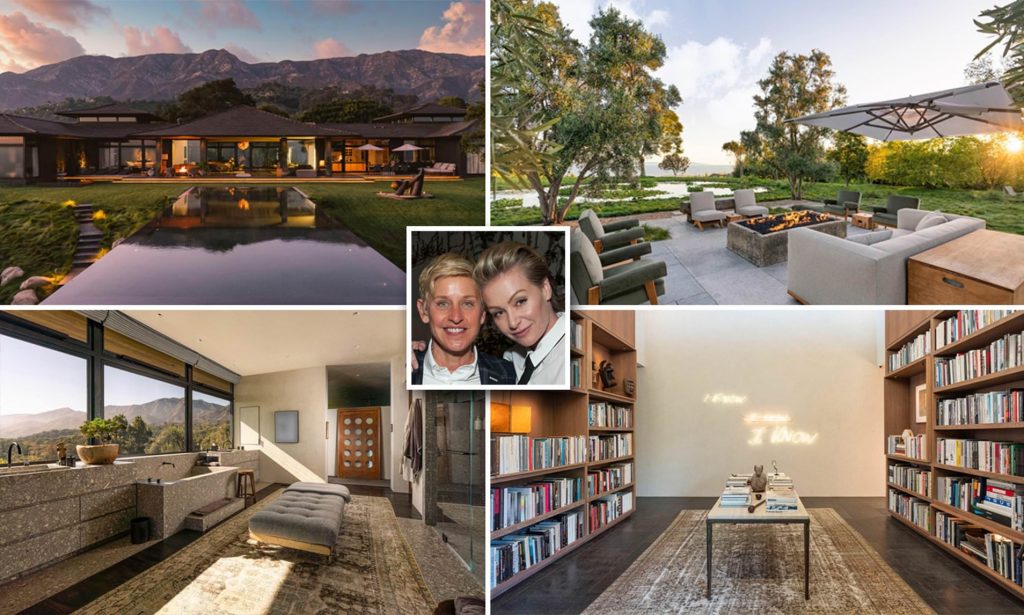 Since buying this house, a little over a year ago, the couple have managed to make a tidy profit by selling it for $55 million, 6 million dollars more than what they bought it for. The mansion has a guest house, a detached garage, a barn, a large stocked pond, organic veg gardens and an infinity pool. The pair have since bought two cheaper homes around the corner. 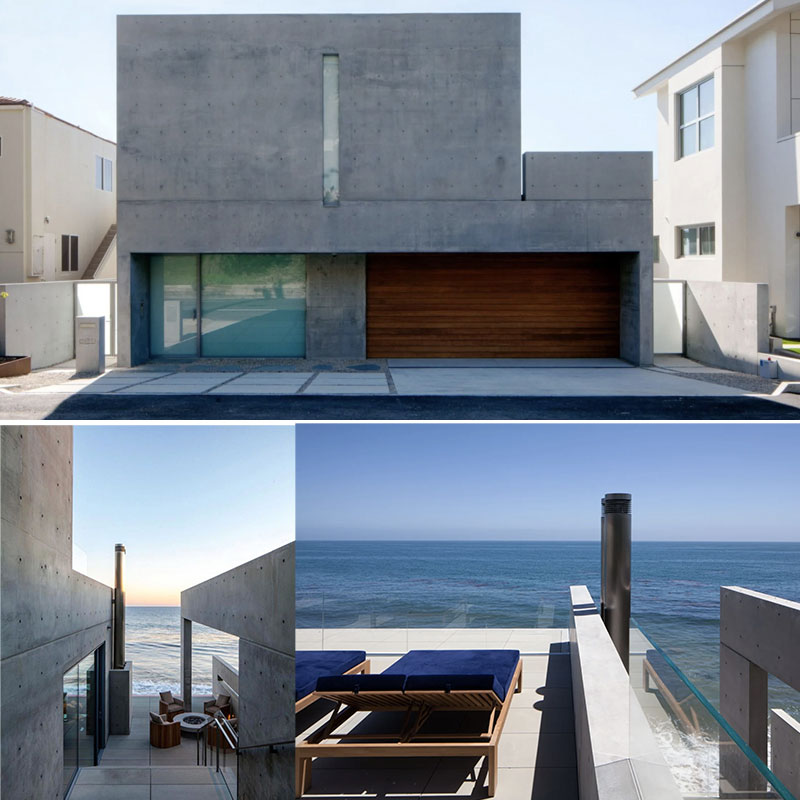 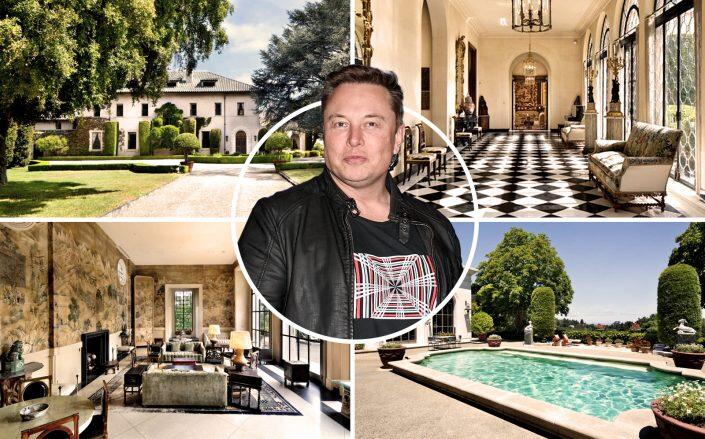 The Tesla CEO & SpaceX founder vowed to “own no house” and this recently sold San Francisco mansion was the last property he needed to ‘get rid of’.  He sold the 47-acre, 7 bedroom, 10 bathroom, Hillsborough property in 2017, which boasted a library with leather walls, a kitchen equipped for a private chef, a cocktail room & high ceilings! The singer just casually dropped $70 million on this 33,000-square-foot mansion in Bel Air. His nine-bedroom mansion has both indoor and outdoor pools, a recording studio (obviously), a home theatre and a view of the Bel Air Country Club’s golf course. How fancy! Now, unlike a lot of the celebrities on this list, George’s fabulous mansion is located in Laglio, Italy. It’s called Villa Oleandra and he bought the beauty for $10 from the Heinz family. Despite rumours of the actor entertaining an offer for the villa for $100 million, he and his wife Amal were recently spotted there with their twins. So it looks like the actors keeping it for himself! 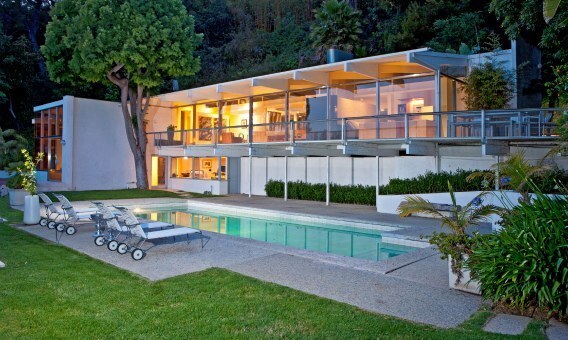 The ‘Friends’ superstar bought the property for $38 million in 2011. The swanky mid-century Bel Air property has four-bedrooms, seven bathrooms and sits on three acres of land. It also includes a guest house, swimming pool and a hillside vineyard – how extra! 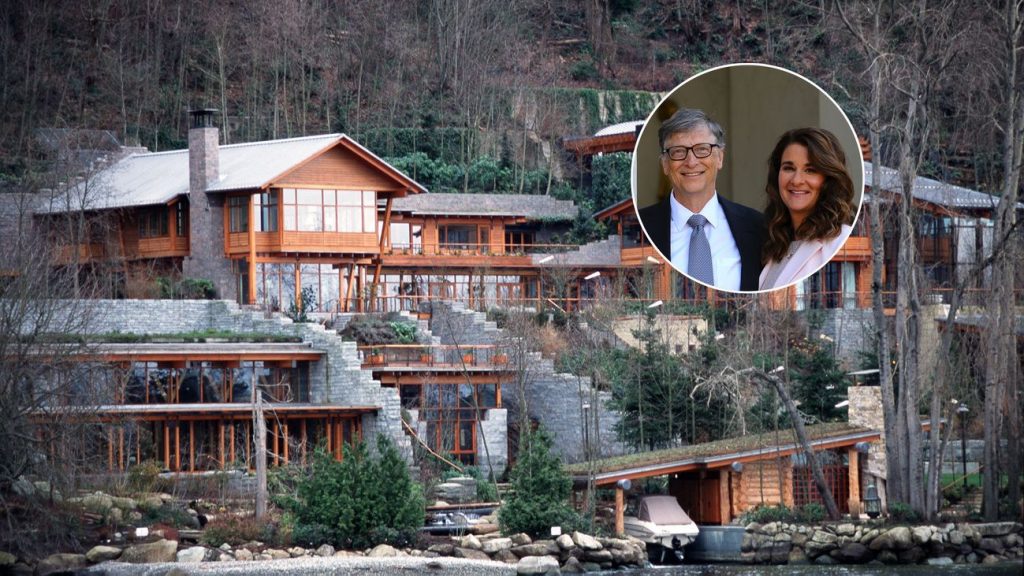 Before the Microsoft co-founder split with his ex-wife, Melinda, they spent $63 over 7 years to build their Medina, Washington, mega-complex. Named Xanadu 2.0, the property today is worth a whopping $145 million, spanning over 66,000 square feet with 6 kitchens and 24 bathrooms, the mega mansion weirdly only contains 7 bedrooms. The house has a Leonardo Da Vinci manuscript worth $31 million. After signing for the Lakers in 2018, LeBron needed a house in LA, so instead of settling for any old LA mansion, he opted for this $23 million chic Brentwood home with 8 bedrooms & 11 bathrooms. This ultra-modern home boasts marble countertops & French oak floors as well as a rooftop terrace, a master bedroom and a private patio. Oh, and a cigar lounge & wine cellar. 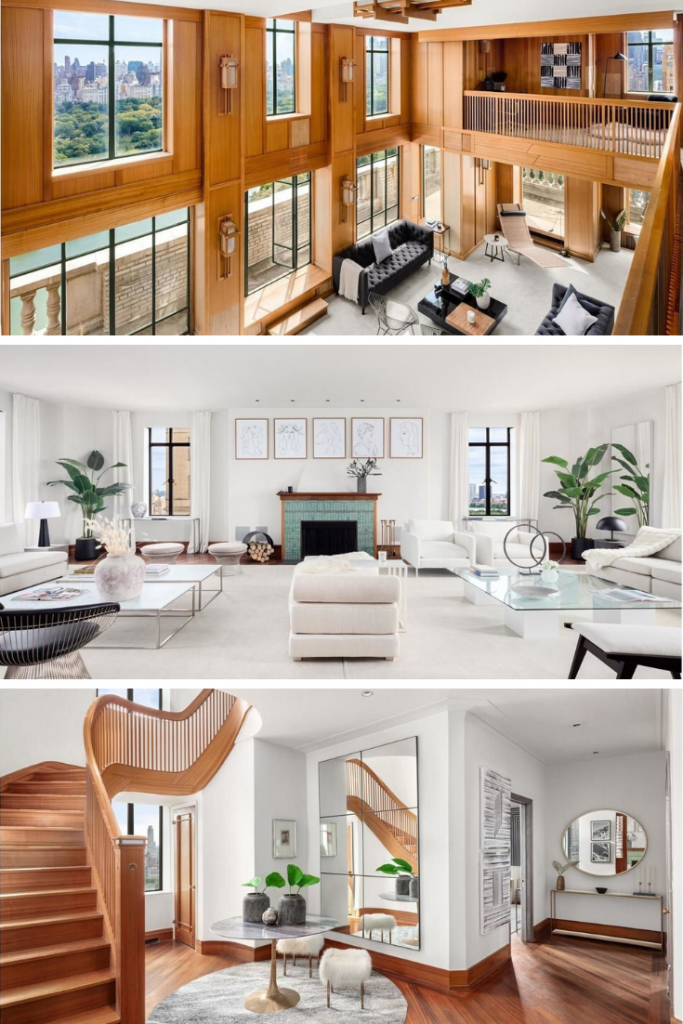 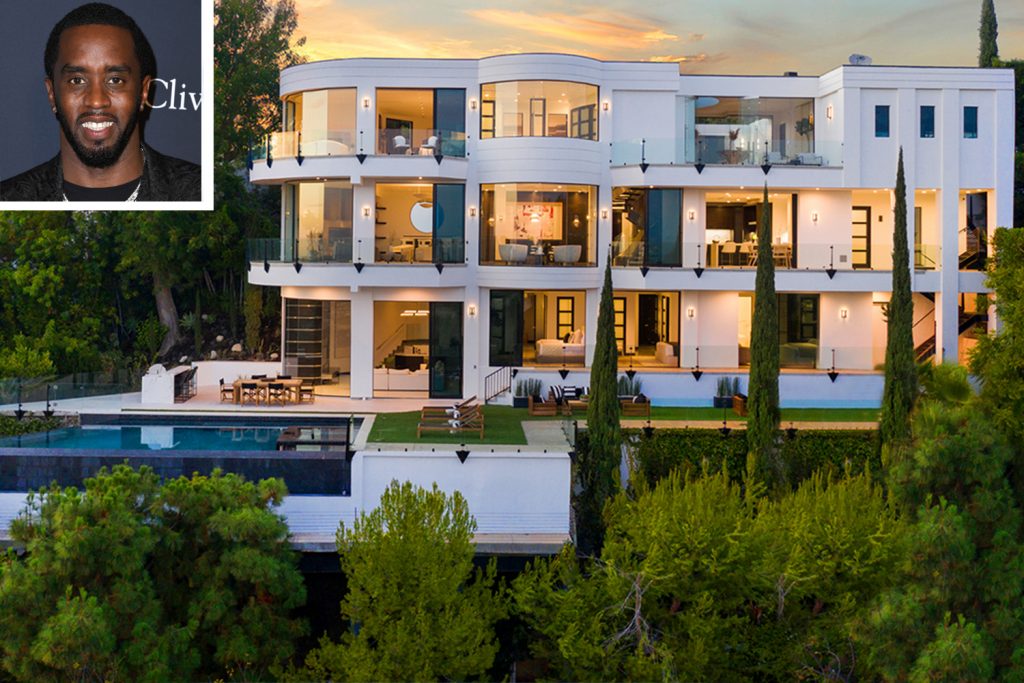 Sean Combs AKA P. Diddy, dropped a hefty $40 million on his Holmby Hills Mansion. The eight bedroom palace includes a wine cellar, a gym, a home theatre, a lagoon pool and an underwater tunnel that leads to a luxury grotto. You definitely wouldn’t be complaining calling this place home! Another rap and media mogul to splash out on a $40 million California mansion is Dr Dre. This equally lavish French-country mansion, features a 10,000 square-foot music studio and a moat. Located in Brentwood, California, he’s not far from celebs like LeBron James. 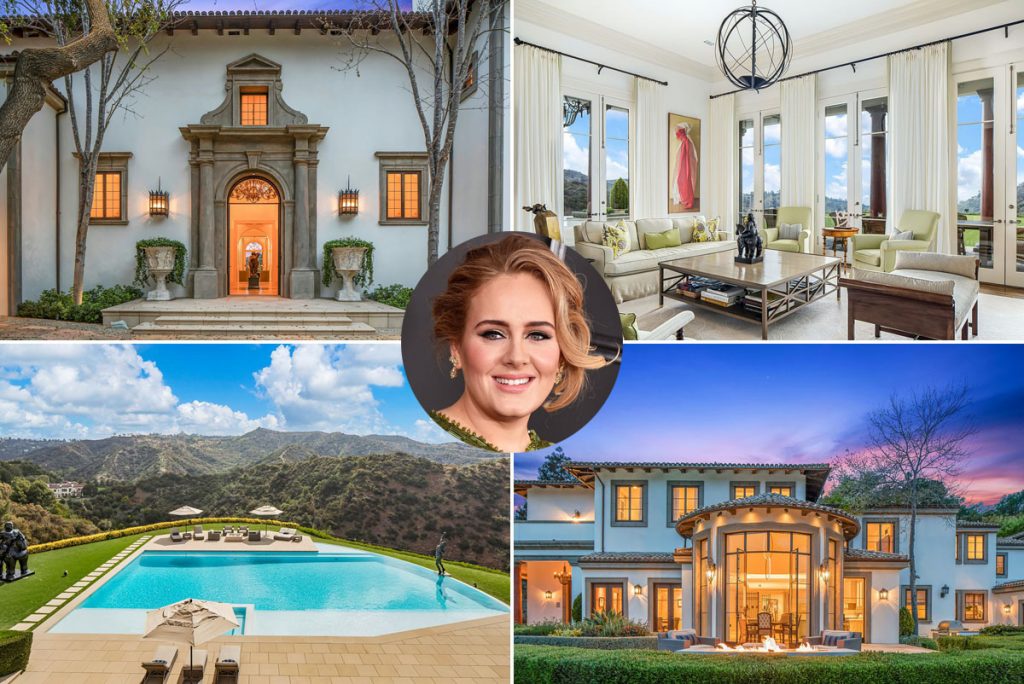 Like many British celebs, London-born Adele moved to Los Angeles to pursue her career many moons ago. Her swanky home includes 4 bedrooms, 6 bathrooms (why do celebs always need so many bathrooms?), a pool, a treehouse & an outdoor train set. Very snazzy! 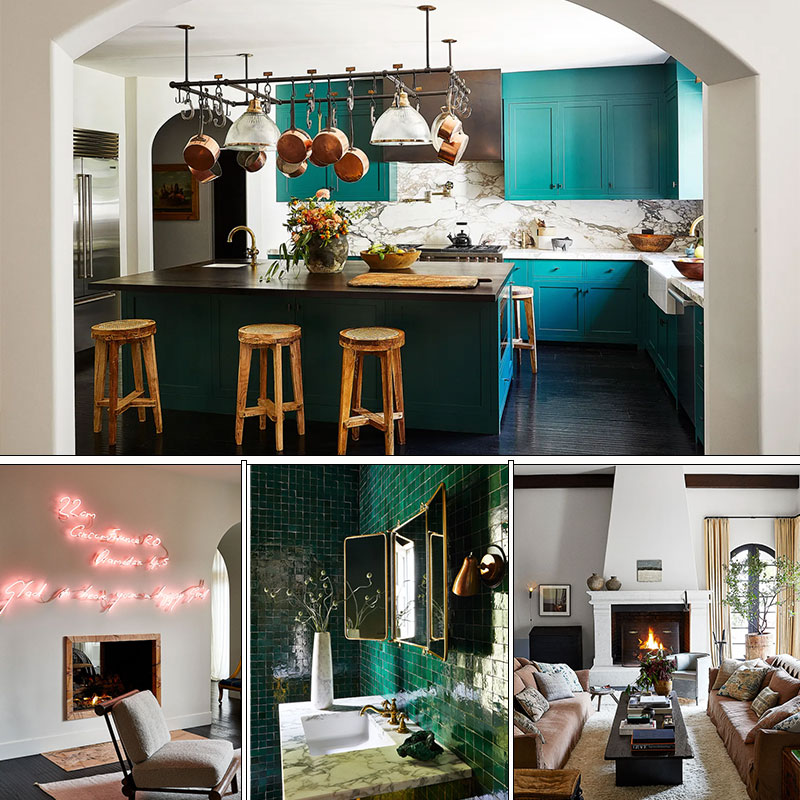 As you can see she has quite different taste to the rest of her family. Whilst they opt for a clean and simplistic feel, Kendall’s house is quite cosy and somewhat bohemian. Her funky taste links to her down to earth personality, which echoes around the whole of the house.