You know what’s it’s like if you’re travelling in the UK by bus during rush hour.  There is a very small chance you may have to stand for a minute or two until a passenger gets off and you can grab their seat.  Well, in the village of Khurja in Uttar Pradesh, it’s a case of holding on for dear life if you want to survive the journey! In Bangladesh, the country is expanding its infrastructure faster than you can say chooo-choooo!  Minding the step as you leave the platform to get on to the train is not applicable.  It’s a case of mind the rails while you make your way to the top of the train!

3. Venezuela – just another day at the Metro …. The Caracas Metro, in Venezuela, is a huge rail line in Latin America.  Up to 1.3 million people board trains there every single day!  Forget queuing – it’s a case of holding your breath and pushing as near to the front as you can.  There’s not even enough room to slide a sheet of paper in between the commuters. Bogota’s Transmilenio bus system is so mega busy during the day, not just at rush hour.  This is partly to do with the fact it doesn’t run in the evenings (it’s probably too worn out!)  It was recently judged as having one of the most unsafe public transport systems out of 15 different capitals.  Doesn’t fill you with much coincidence! Clapham Junction, London. Unlike its world-renowned underground tube service, the city’s over-ground rail, such as at Clapham Junction, often exceeds its maximum capacity during peak hours by at least 40%.  Commuters are squashed on there like a can of sardines. South America’s largest city, São Paulo sees over 1.5 million people use its trains each day.  The image here of The Se Metro station is one of the busiest and it’s an effort even getting through the ticket barrier in one piece before even stepping on the train.  Once on, that’s a different story all together – pushed, pulled and stressed is the norm. Howrah Junction is the largest railway station in India, serving  Kolkata and Howrah.  Its 23 platforms, spread over two terminals, are choca-blocked during rush hour as passengers attempt to fight their way to the carriages.  Bagging a seat would be the highlight of the day!

8. Dhaka, Bangladesh – tradition all the way!

Dhaka, the Capital city of Bangladesh, has an unusual, rush hour but crazy all the same.  This city is still firmly rooted in its traditions, particularly cycle rickshaws.  Each morning and evening a huge convoy of these vehicles take up most of the road causing horrendous traffic congestion. 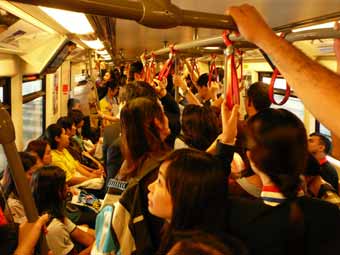 Bangkok, one of the top tourist cities in the world and capital of Thailand, is a complete nightmare for drivers. With more than 5 million registered vehicles in a city that has developed organically over time, Bangkok lacks a good grid structure to its road network and there is constant congestion, terrible at rush hour and very bad at all other times.

10. Moscow, Russia …. so how many lane of traffic are there? 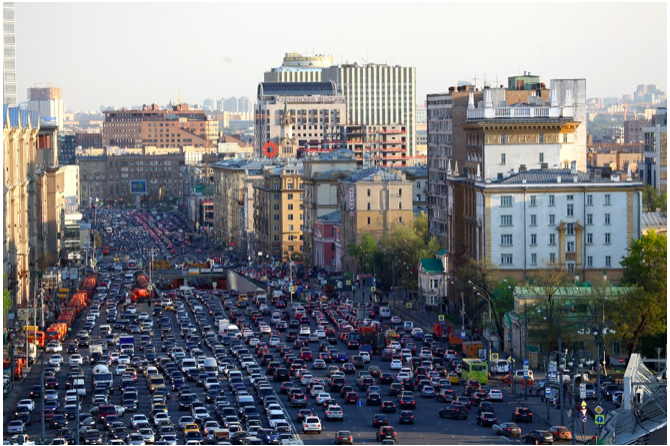 Obviously, capital cities experience traffic chaos during rush hour and Moscow, Russia’s capital, is one of the worse culprits.  Rows and rows of cars, in each direction, fill the roads within an inch of their lives.  If  vehicle breaks down, tempers flare and drivers start screaming! 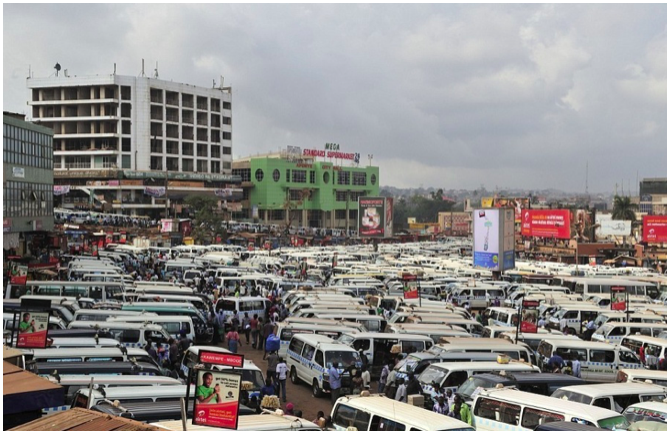 This city in Uganda is notoriously famous for its peak hour traffic in a far from positive way.  Just a glimpse in Kampala city at the taxi park will help understand that these taxi cabs are the main reason for the bulk of the traffic during rush hour.  You’ve heard of organised chaos – well this is the opposite! 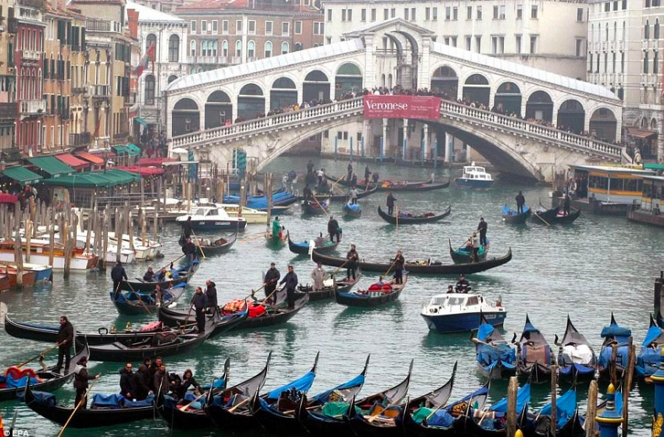 Water can be so relaxing, a nice bubble bath with a glass of wine and a scented candle in the background.  STOP – the waterways of Venice, their primary form of transportation during rush hour, sees such an amount of gondoliers that it’s quite unsettling and stressful. 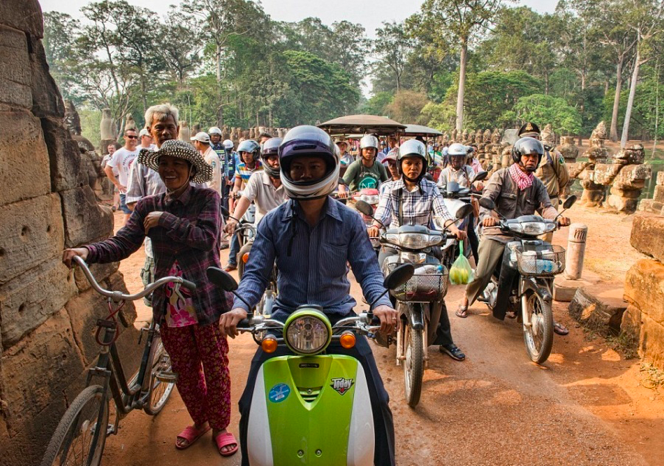 Two wheels could well be better than four when it comes to rush hour and these natives are used to wheeling in and out of traffic to get to their destination.  The quality of the roads are not good and most of them are rugged and uneven so the riders have to concentrate on keeping their derrieres on the seat. 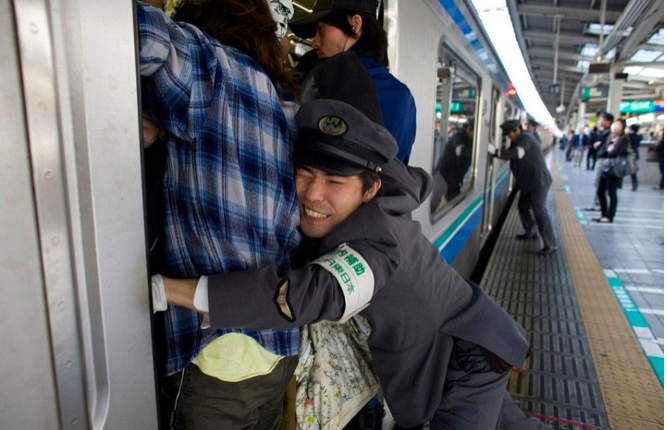 Rush hour lasts longer than the usual time you wold expect when it comes to the commuters of Japan because of the number of travellers each day that board the trains.  Every last person is squeezed on!  Certain trains allow women only in numbered carriages to avoid sexual harassment so thumbs up to that. Despite a massive population, there are not enough trains to accommodate the people who wish to use them.  Come rush hour, you almost need life insurance because it’s so brutal to even get through the station!  Once the train pulls in, it’s each man for himself Ikebukuro station is part of the East Japan Railway Company which is the largest rail operator in the world.  In order to get commuters on to the train, attendants are specifically  employed to physically push them on to the carriage in an effort to control the people traffic and clear the area a little, even for a few seconds. Rush hour in Beijing nearly always features packed corridors and long lines waiting  board the trains.  Travellers sometimes have to wait up to 2 hours to jump on a train which explains why they have to get up so early for work,  even just to travel a few miles. 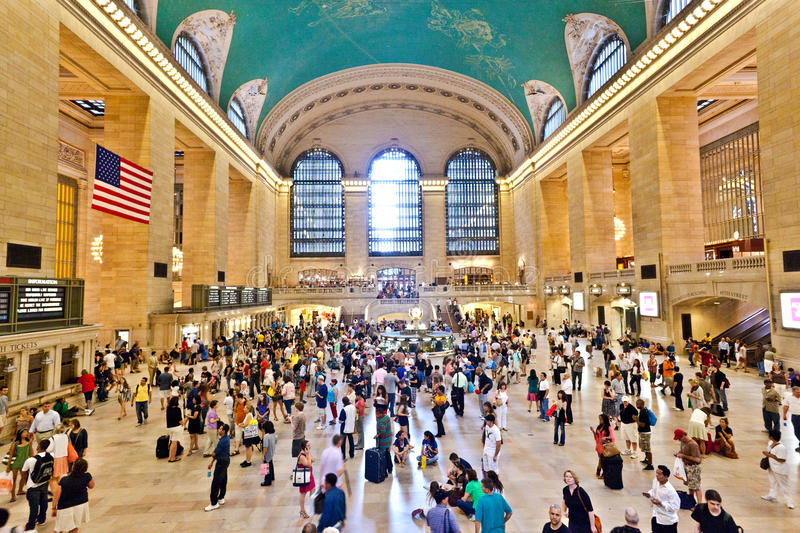 Grand Central Terminal usually experiences around 750,000 people passing through every day which makes it the single busiest station in New York City.  As well as rush hour, tourists swell up the numbers.  This image was taken at 5am in the morning and within an hour the station would look almost overflowing. When we hear about another lane being made available on one of our busy UK motorways, we know it will make travelling a lot easier with minimum congestion.  Fast forward to China who have so many lanes but every one congested.  Seems the more that are provided, the more hectic the congestion becomes. This has to be the largest rush hour traffic ever!  Here we see a massive crowd trying to hop on to the train or, if not successful, climb on top of it!  Commuters really do take their life in their hands and there have, unfortunately, been times when someone has fallen off

21. Jakarta, Indonesia – helmets at the ready! 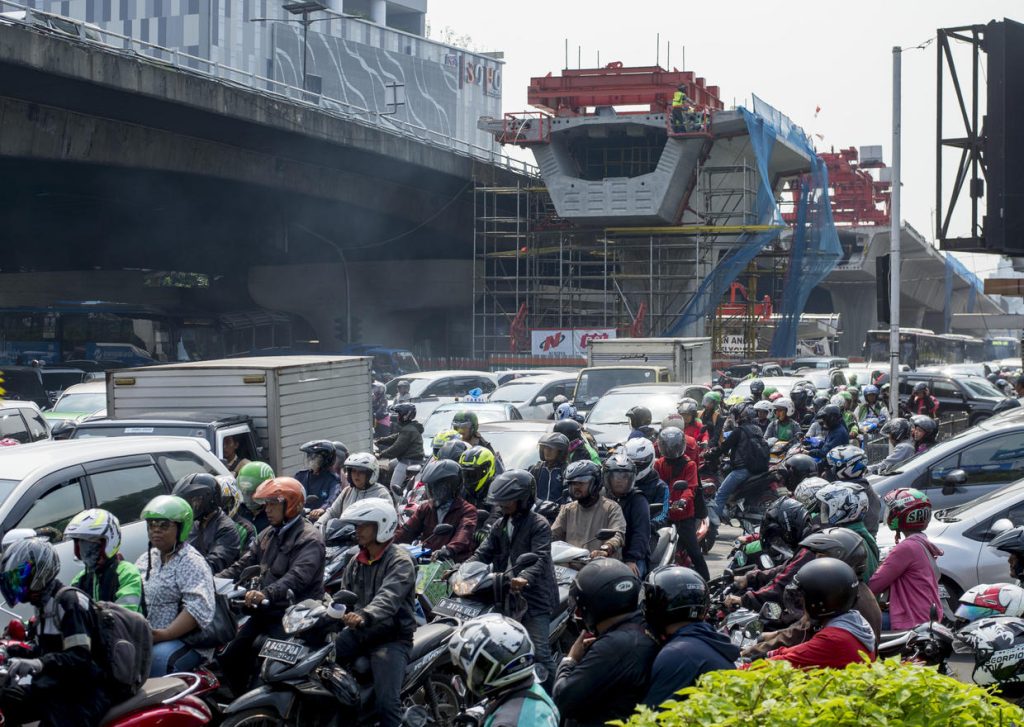 Unlike many major metro areas, Jakarta saw a decrease in traffic in 2021, but it still ranks highly in the congestion charts.  Gridlock involving both cars and motorcycles makes up the rush hour traffic and it’s a hectic couple of hours that ensue.  Nothing for it but to crawl along until you reach your destination. 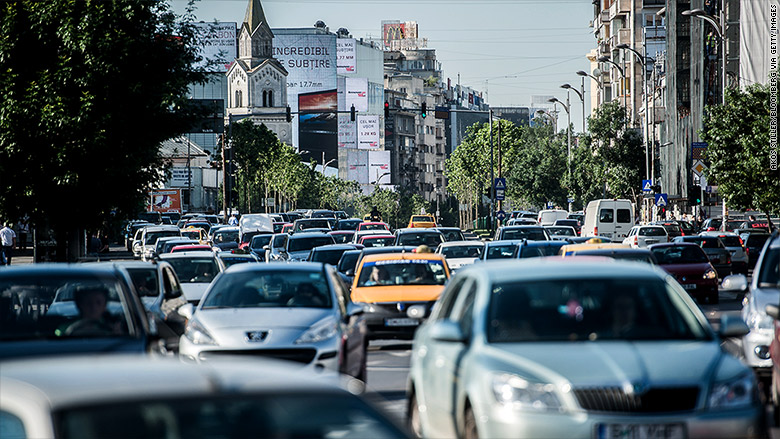 The main reason for so many vehicles on the road here in Bucharest, Romania, especially during rush hour, is that car parks are free of charge.  If only other countries followed suit, it would make traffic jams that bit easier to bear!  Also, the public transport system is unreliable so travellers prefer to drive. 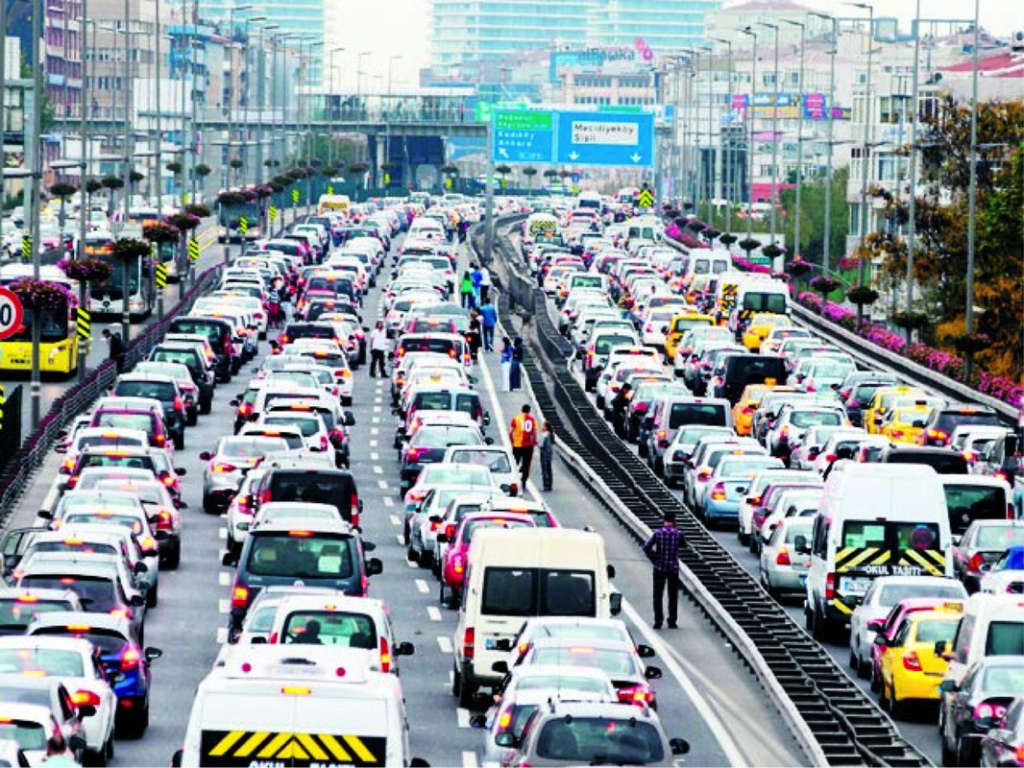 The award for worst city for traffic in Europe goes to Istanbul, Turkey. The city stretches across two continents and many bridges which goes towards the vast build up of traffic.  It has been known for 3 lanes of traffic to contain 5 rows of moving cars so a lot of frustrated motorists during the busiest times of the day.

24. UK’s Capital …. getting off the train is as hard as boarding it!

When you actually manage to get on a tube, even standing room only, you can breathe a  sigh of relief as you can get into work on time, for a change.  However, the slight euphoria is short lived as leaving the train is a far from pleasant experience.  There is so much shoving going on that you have to try and keep your balance for fear of being knocked down by the crowds. 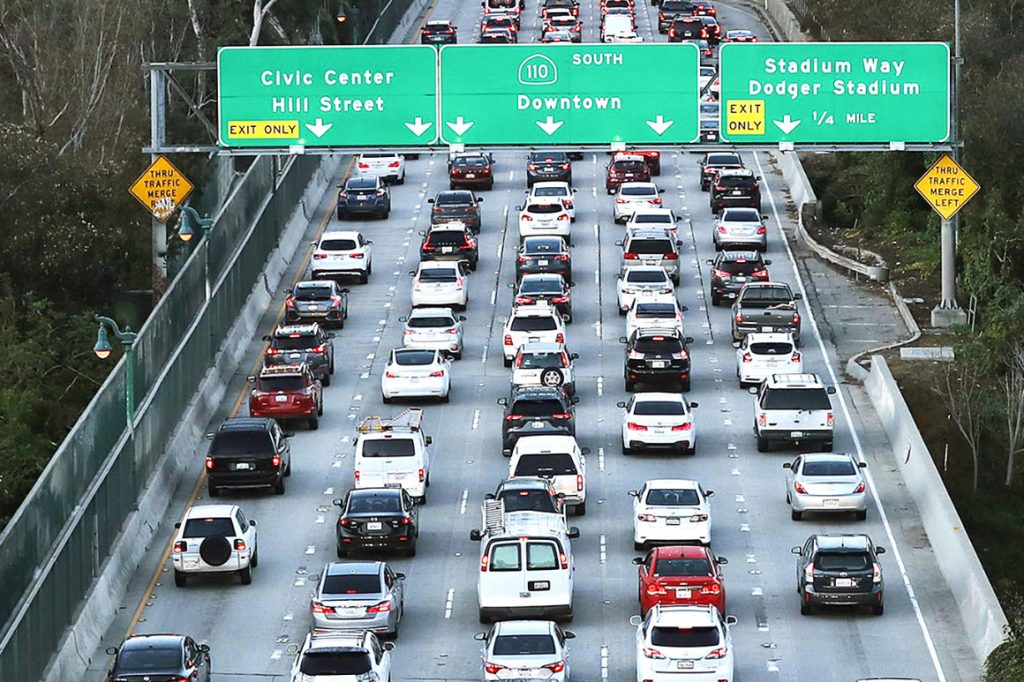 During the busiest hours, L.A. motorists should add at least 50% extra on to the time of their normal commute (on a good day).  Day and evening, the streams of cars are relentless across the fie designated lanes.  Definitely takes the fun out of driving! Earls Court is a Grade II listed building and this London underground station is an important interchange for both the District and Piccadilly lines.  Now you may get the picture of the sheer volume of passenger who use and rely on it.  Even when the whistle blows and the doors start to close, people will still risk jumping on and throwing themselves into the carriage. 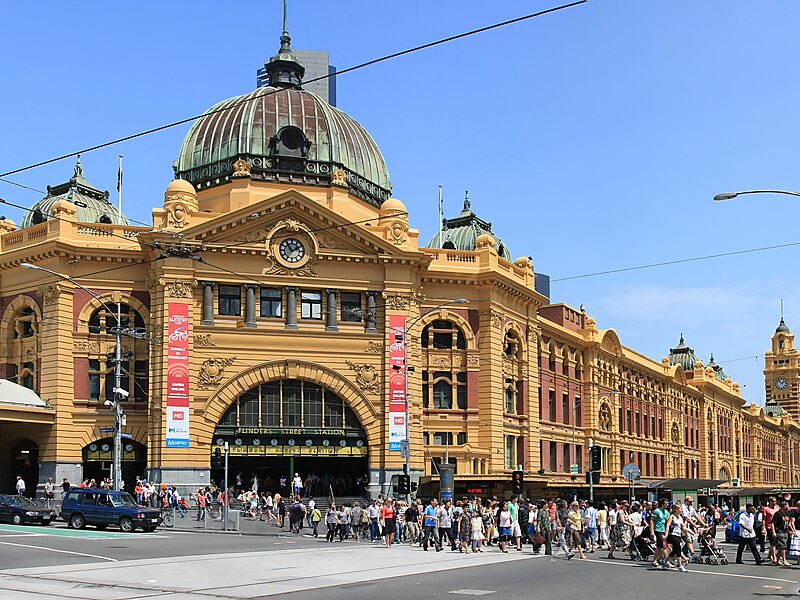 Flinders Street station is the busiest train station in Australia with over 92,000 passengers filing through every single day. A beautiful building, it is listed under the Victorian Heritage Register.  If meeting somebody, it’s quite usual to see them under the famous clock.

28. Brussels Belgium – every day is a Monday! 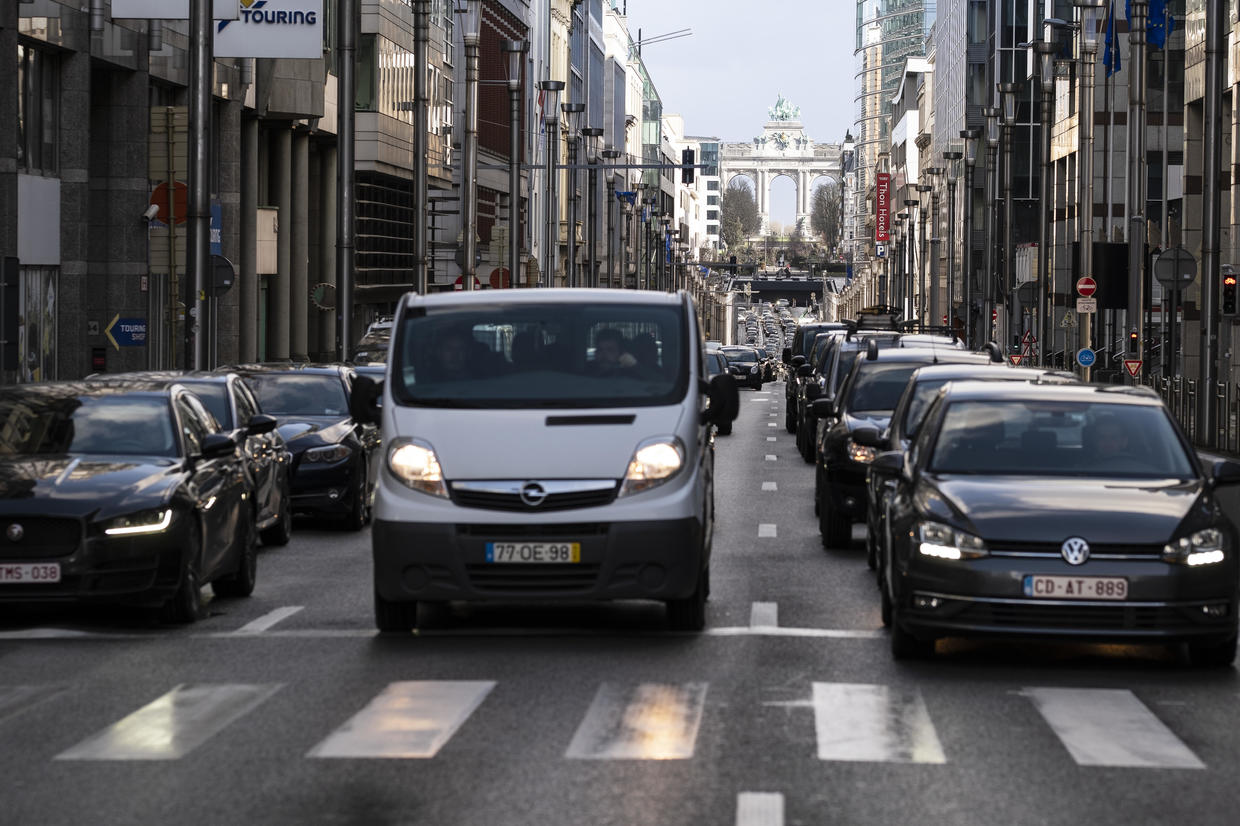 They say Monday mornings are always a bad day for travelling, with more vehicles on the road than at any other time.  That rule does not apply to Brussels as it’s the same story Monday to Friday and the same again on the return journey!  For the population of Brussels, it appears almost every man, woman and child drives! 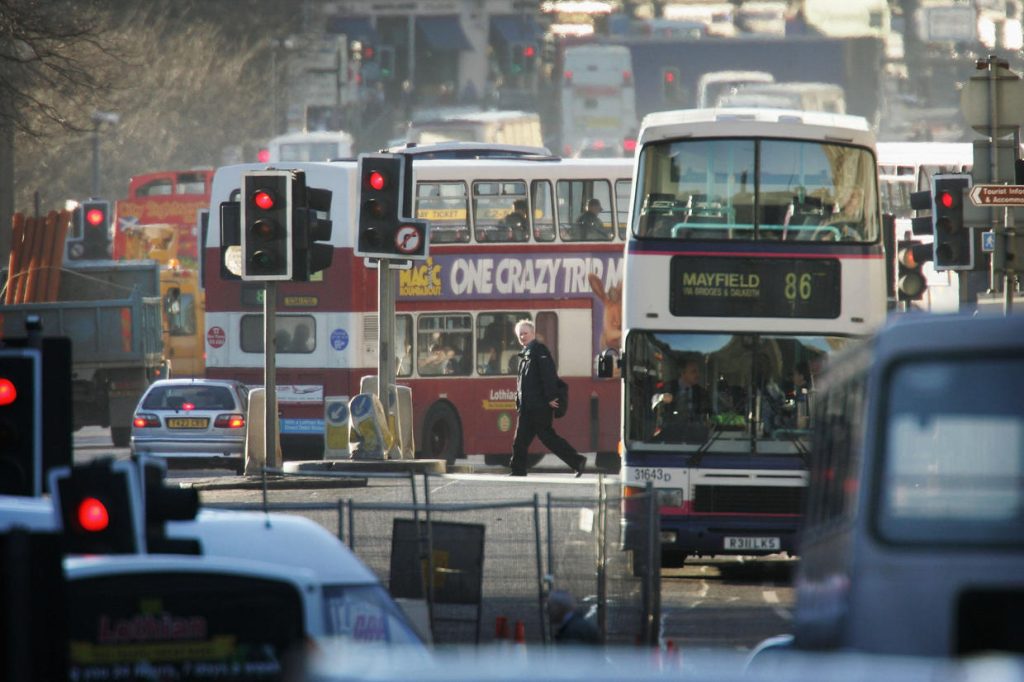 Forget ‘The Tartan Army’, Scotland’s football fans’ nickname – they could do with the actual army on the streets on some rush hour days in Edinburgh.  A mixture of work commuters and many, many tourists causes a lot of time spent huffing and puffing (and swearing under the breath) in frustration in travelling at a snail’s pace for mile upon mile. 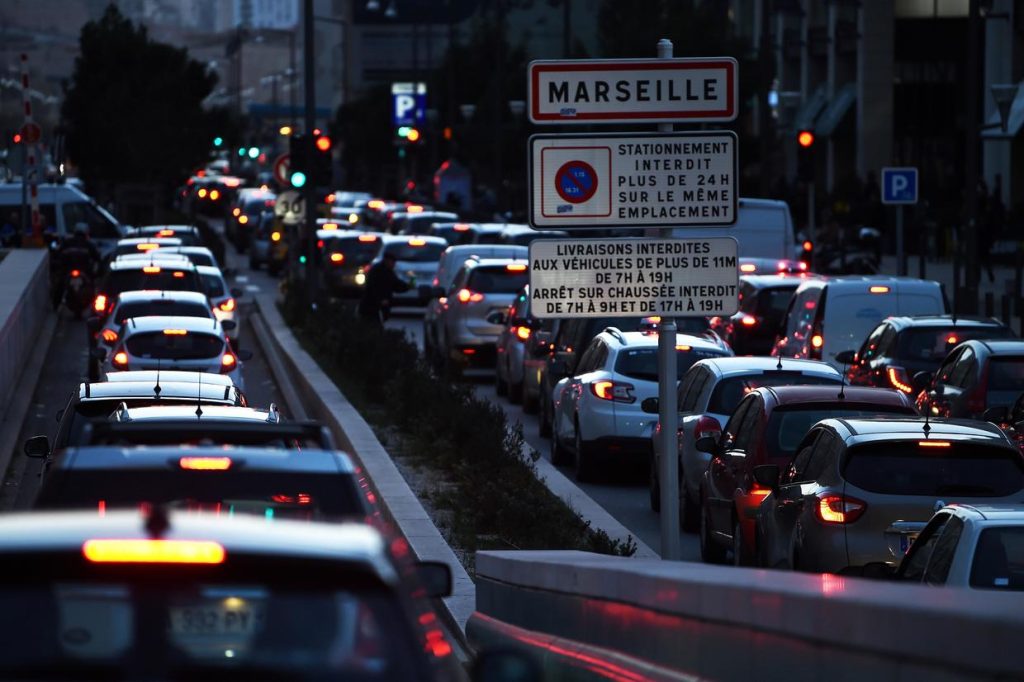 The French people are known to prefer taking their time when eating their meal and sipping a nice glass of wine.  Taking their time is not on the agenda when it comes to peak time travel.  It’s a slow drive to get not very far and traffic jams can delay journeys for up to an hour.