Although Harry didn’t ‘officially’ escort any one to prom, he did play a role in one lucky girl’s big night. Twitter user Amy posted a video of Harry asking her to prom on behalf of her date, Deschen.  Of course, the video went viral when Amy tweeted it along with the caption, ‘So Harry styles just asked me to prom!’ 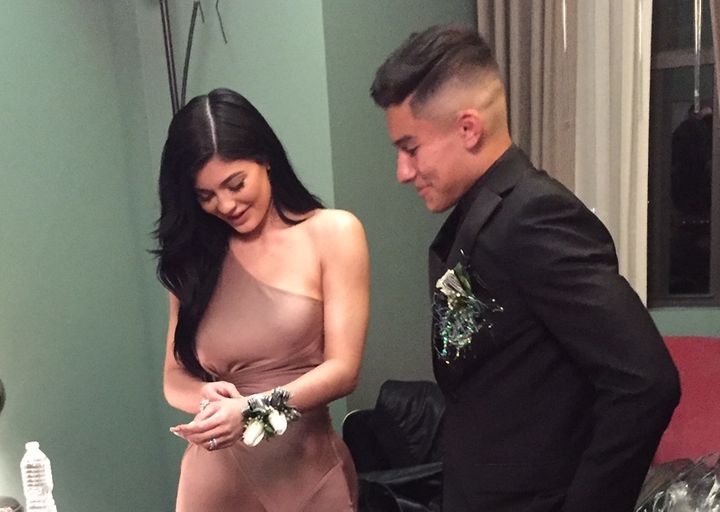 In August 2017, Kylie joined a junior at Rio Americano High School in Sacramento, California, Albert Ochoa, at his prom.  Miss Jenner had never had the opportunity to go to prom because she was home-schooled and when she heard of Albert’s prom fiasco via social media (he had originally asked his sister’s BFF, who rejected him) then she decided to be his date. The occasion showed up later on an episode of ‘Life of Kylie.’ Of course, when Kylie accepted the prom invite from Albert Ochoa, her best friend Jordyn Woods, had to go along too!  The girls were snapped on their private jet, showing off their dresses and corsage.  Talk about doing it in style – most prom-goers would be over the moon to get transported by limo! 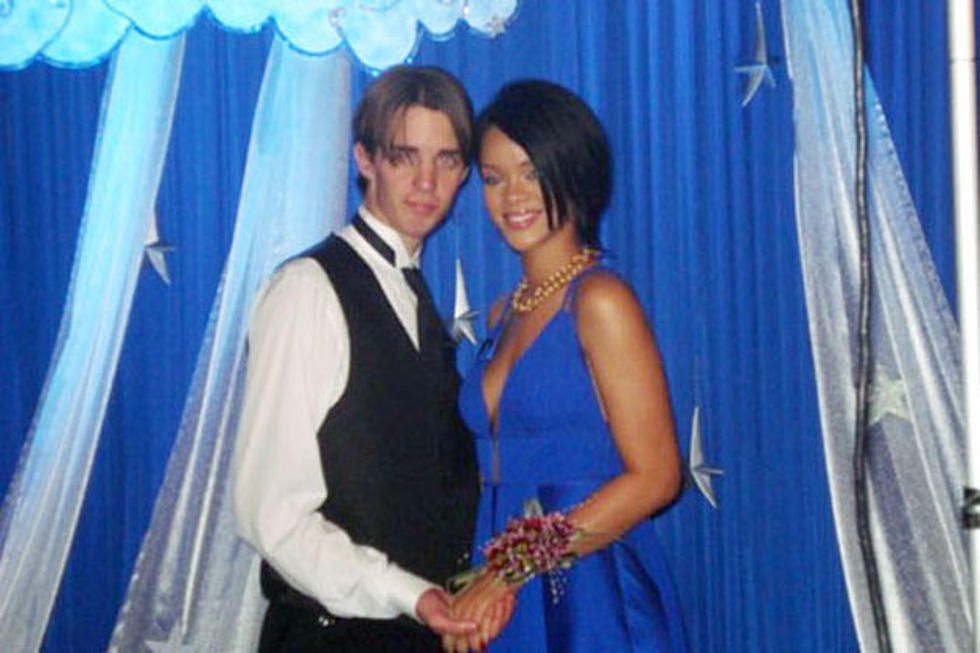 MTV used to run a show called ‘Once Upon a Prom’ which had Ri-Ri choosing a high schooler from a group of guys, all without a date for the event.  The lucky lad, Richard, got very over-excited when he was selected as he was already a massive Rihanna fan! 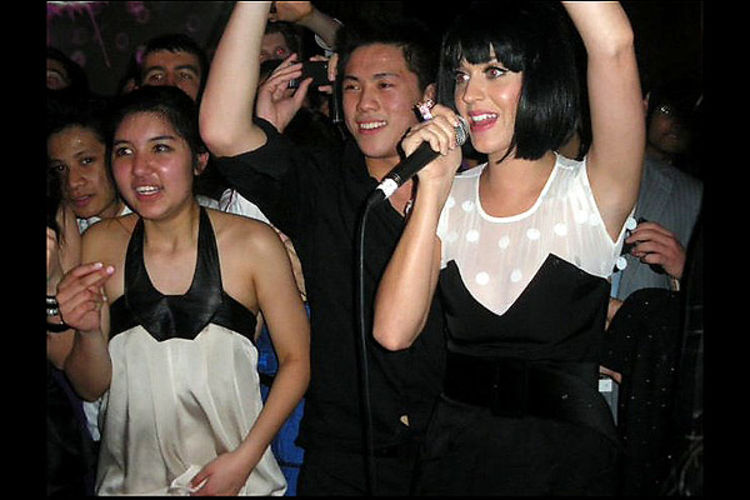 Image source Guest of a Guest

While on a trip to Melbourne, Australia, Katy Perry stumbled across a high school prom at the Grand Hyatt, where she was staying.  She hung out with the guys and girls for 15 minutes, took selfies and performed  Beyonce’s ‘Single Ladies.’  Katy announced on Twitter, ‘I totes crashed a prom!!!’ Taylor Swift also appeared on ‘Once Upon a Prom’ in 2008 as she had missed out on her own due to her touring schedule. Choosing from 50 prospective dateless dudes, she went for Whit White who she said was unbelievably sweet.  Taylor stunned in a pale pink dress. 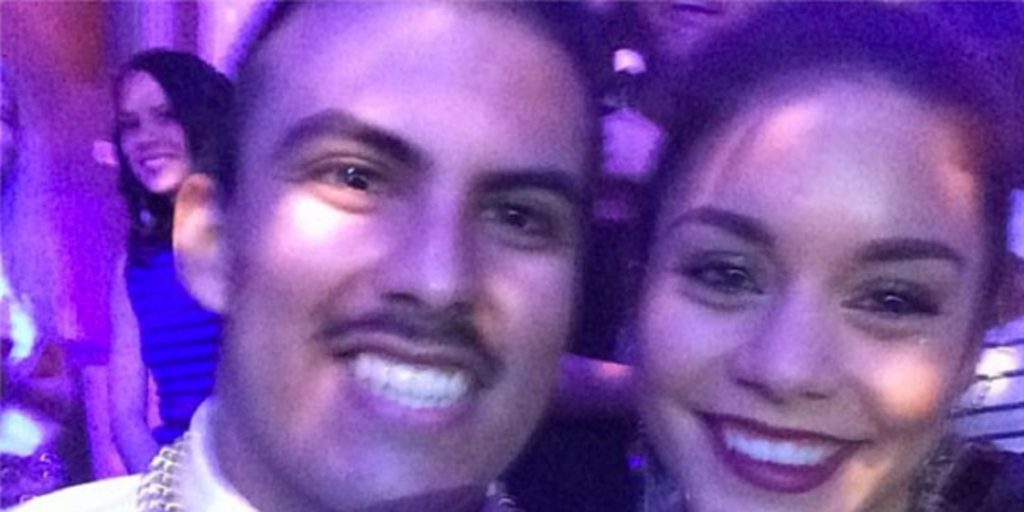 In August 2014, Vanessa Hudgens surprised 17 year old Cesar Guerrero who was battling cancer, at his prom. The party was being thrown by Sylmar High School in L A and The Art of Elysium, who Vanessa had worked with in the past.  Lots of selfies were shared on Instagram and Cesar said he had the best night ever. 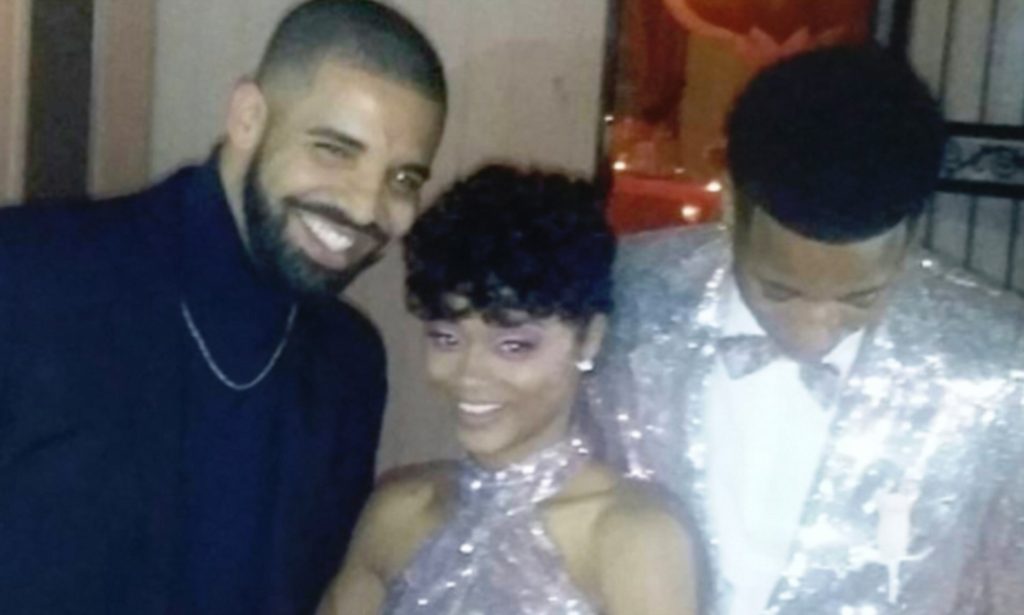 Drake put on his best turtleneck sweater when he joined Jalaah Moore and her date at their prom in Memphis in 2017.  Jalaah is actually Drake’s cousin and, technically, Drake acted as chaperone!  He put on a white Rolls Royce for the occasion and an after party at the local Hard Rock Cafe for 400 prom-goers. 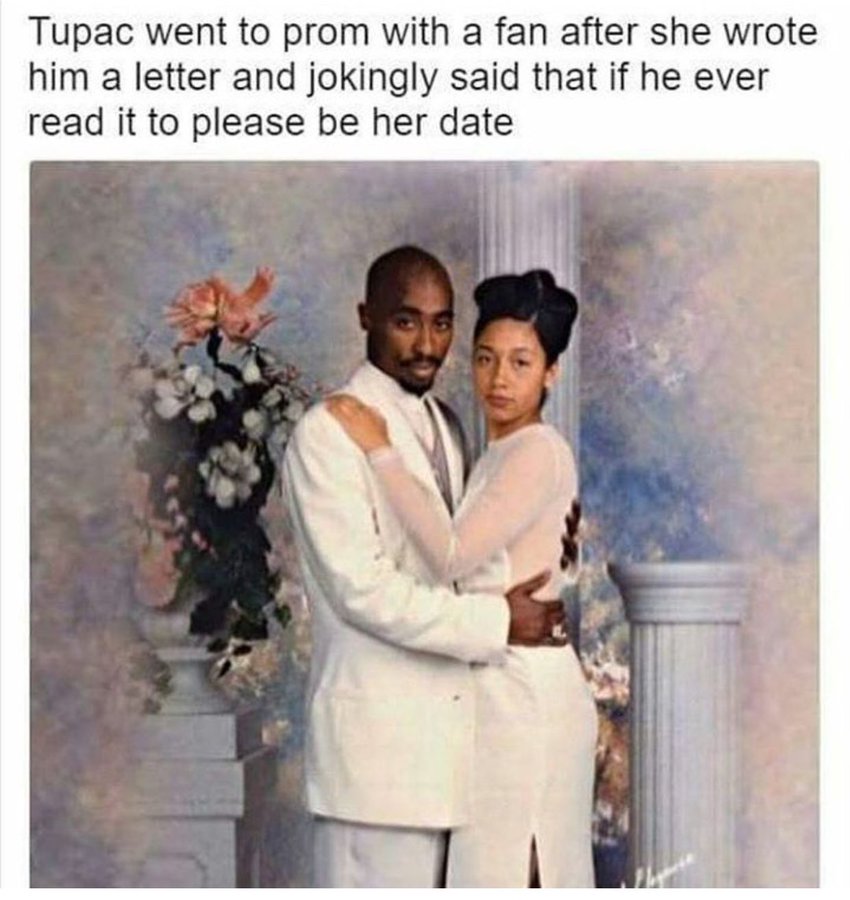 Not long after high school student Kia Chenelle wrote a letter to his fan club, Tupac replied to her request to accompany her to prom.  He turned up at her door alone, no reporters, and had the limo at the ready.  He had already given Kia $1,500 for her prom dress and she looked stunning. 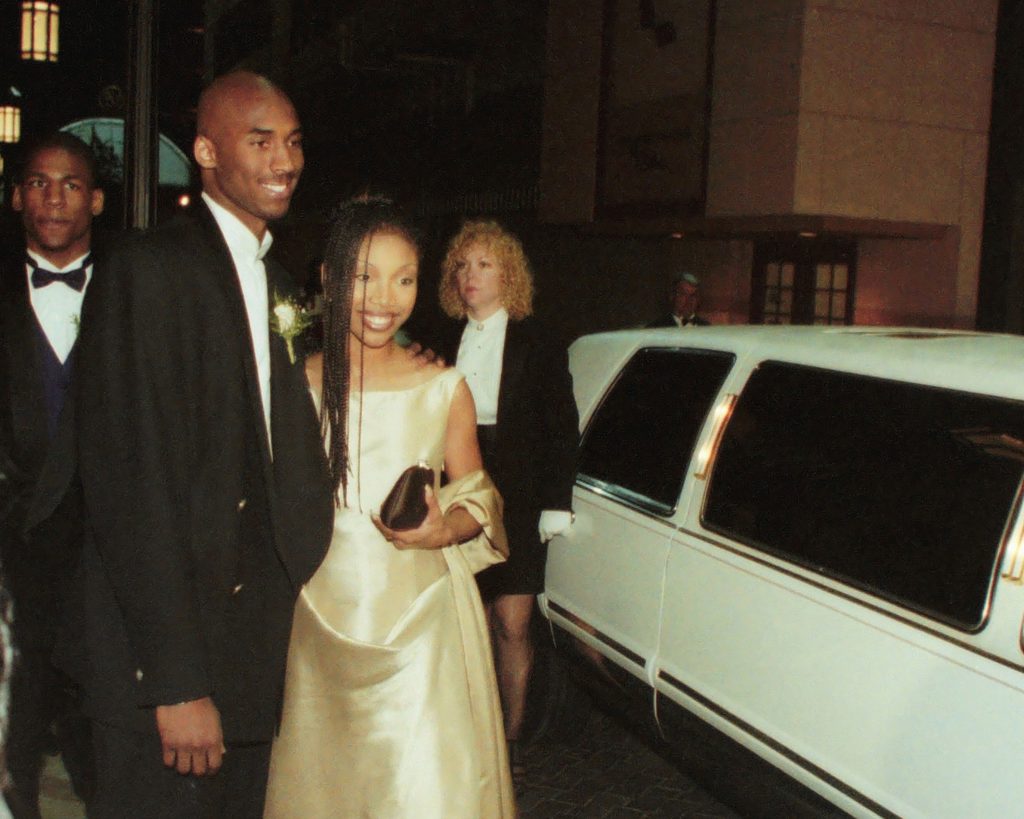 It’s hard to believe that there was a time when 17 year old Kobe Bryant was just a regular high school student in need of a prom date.  Brandy was already a platinum selling, Grammy winning artist who had starred as ‘Moesha’ on tv.  They had met at an awards ceremony the year before and had become friends.  Brandy commented that it was nice to feel like a ‘normal every day girl.’ 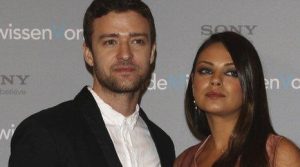 In November 2011, Justin Timberlake showed up to the Instructor Battalion Marine Corps Ball with combat instructor Kelsey De Santis as his date in Richmond, Virginia.  Kelsey had asked JT a few months earlier, on YouTube, to be her date.  He was said to have been the perfect gentleman. 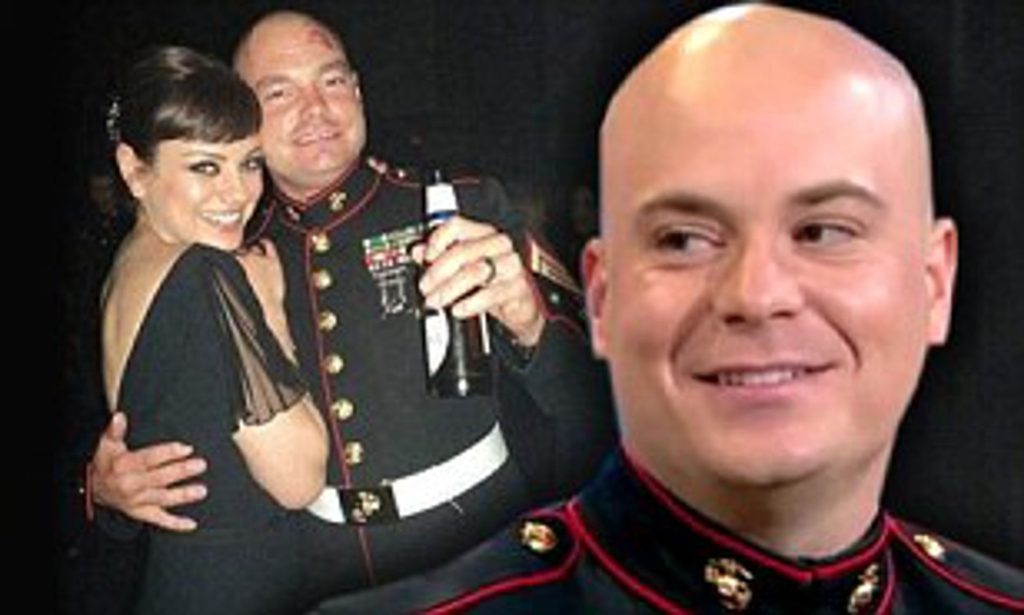 Like Justin Timberlake, Mila Kunis received her Marine Corps Ball invitation via YouTube. Her date was Sgt Scott Moore and he took the actress to the celebrations in Greenville, North Carolina. After the party, he told the Press that Mila ‘was very nice and very respectful….She gets credit and a lot of respect for coming here, not being part of this world and following through on her word.’ 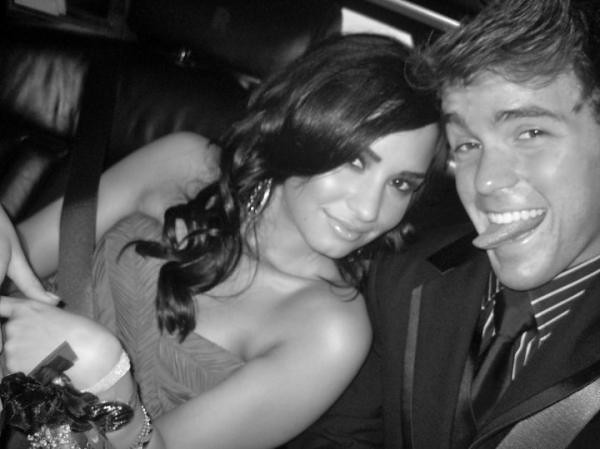 Demi Lovato kept her promise from kindergarten days to her childhood BFF Nolan Narddechia.  She showed up as his prom date in 2010 and she wore a strapless red dress. Nolan gave her a corsage and off they went to prom in a Rolls Royce that Demi had provided. 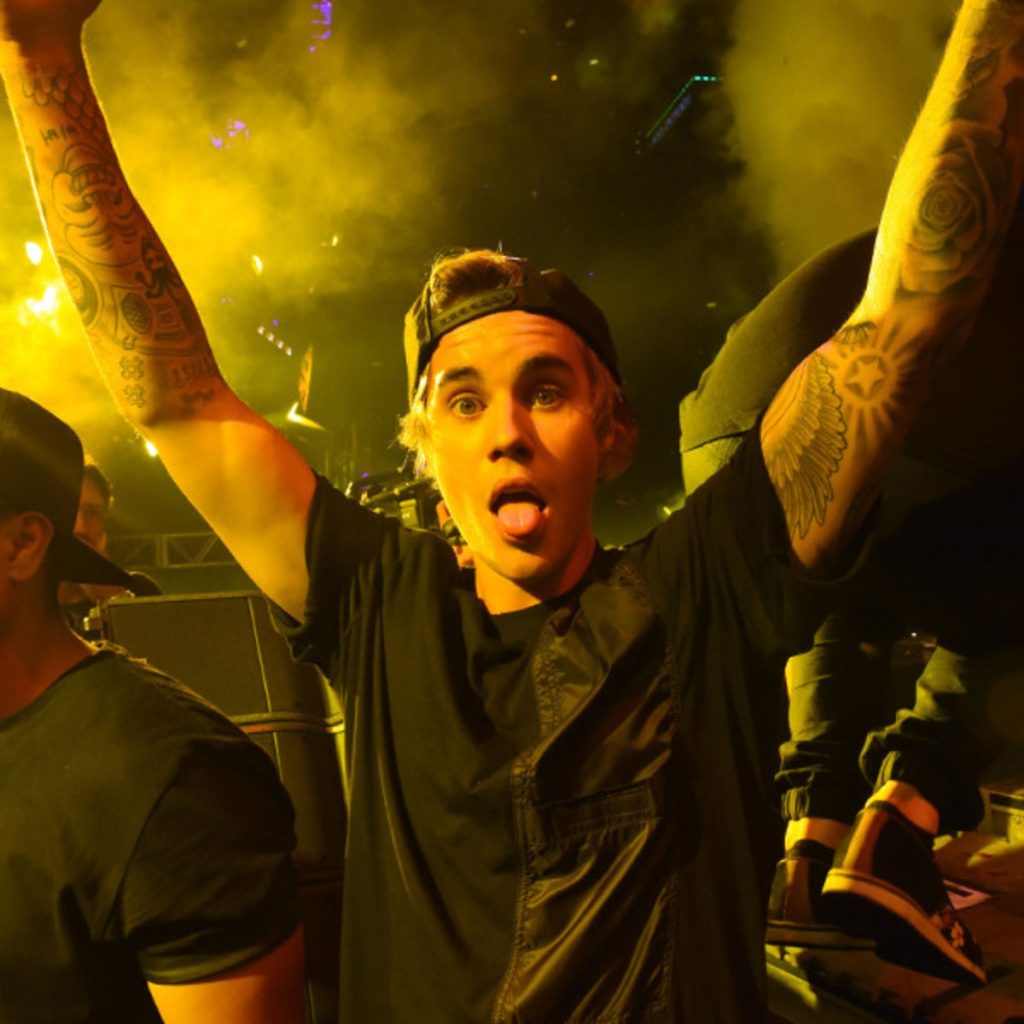 In April 2015, a fedora-wearing Justin Bieber crashed the Chatsworth High School prom as he was recording nearby.  As he had never been to a prom before, after gaining huge success at the tender age of 14, he lapped up the atmosphere which included a lot of screaming girls! 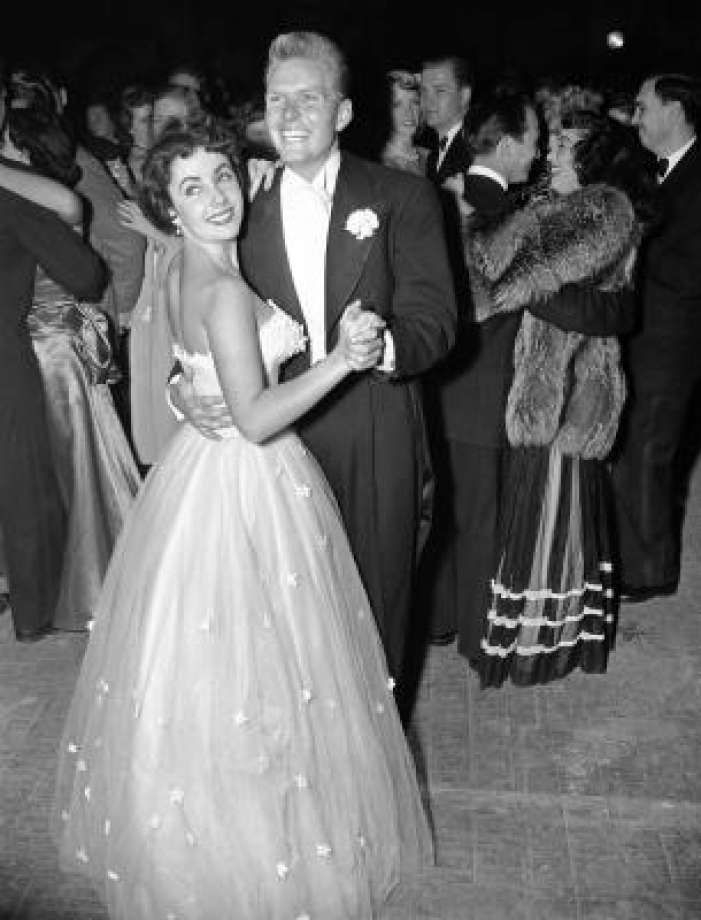 You might have thought that celebrities attending proms with fans was something new.  That’s not the case as Hollywood mega star, Elizabeth Taylor, spent the evening with one of her fans. The actress escorted UCLA’s Bob Precht to his prom as he scooped the prize for winning The Most Romantic He-Man on the Campus.’ In June 2009, Selena left her own dinner party and crashed the Etobicoke Collegiate Institute prom which was held on the same premises. She later returned to her own event, grabbed Demi Lovato and other friends and went back to the prom, staying until being asked to leave when it finished at 11pm. After Miley declined high school student Matt Peterson’s prom proposal,  she invited him to her Phoenix, Arizona, show and asked him to bring a corsage. Both parties kept their promise and on 27th February 2014 Matt showed up, shirtless, with Miley’s corsage. She then sang ‘Adore You’ to him! 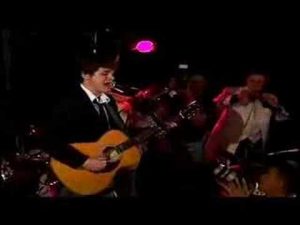 It took two years of convincing, but in 2004 John Mayer finally showed up to sing at Pennsbury High’s year-end dance.  He wowed the crowd by performing three songs and told the students to ‘go be amazing people.’ You can view a blurry recording of this prom appearance on YouTube. 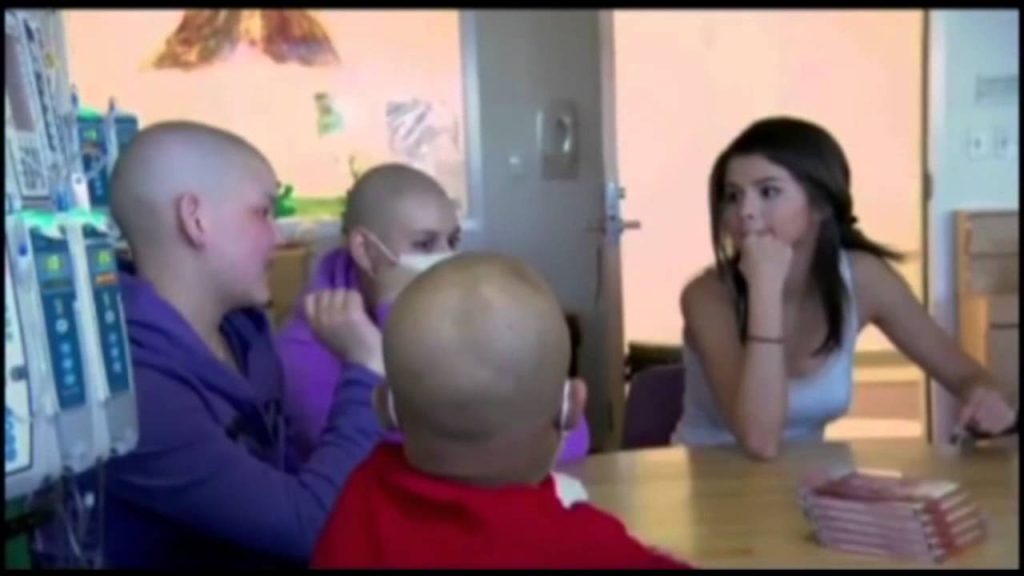 Selena Gomez attended the Children’s Hospital of Orange County’s Oncology prom. She spent the night taking selfies with teenagers and dancing.  It was a huge boost for the sick teens who were all undergoing or had undergone cancer treatment.  Their families were so grateful for her appearance. Actress Storm Reid wore a beautiful sheer pink dress to prom which she attended with Yara Shahidi’s younger brother, Sayeed.  If that’s not cute then nothing is!  Storm stayed for the whole evening and the other party-goers got in on the act by taking loads of selfies. 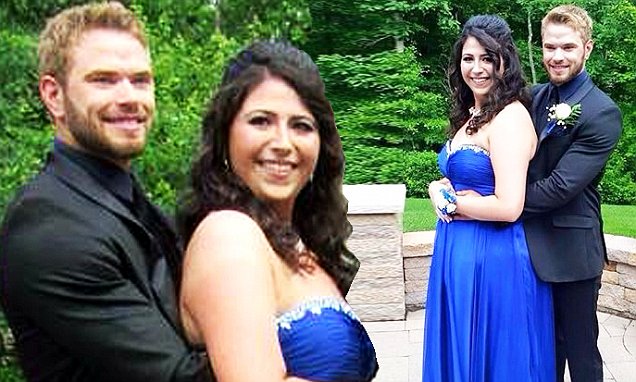 In June 2015, Twilight hunk, Kellan Lutz, accompanied New Jersey student Brianna Siciliano to her prom. The two kept in touch and remained friends, ao ‘Entertainment Tonight’ reported.  Brianna had won a contest to have a video chat with Kellan the year before.

22. The Chainsmokers (2017) – surprised students during prom Andrew and Alex of The Chainsmokers surprised students at Huntley High School back in April 2017.  They showed up for a 10 minute performance during prom, thanks to a letter from a student sent weeks ago, together with the work of the school’s principal.  To sat a great night was had by all would be an understatement! 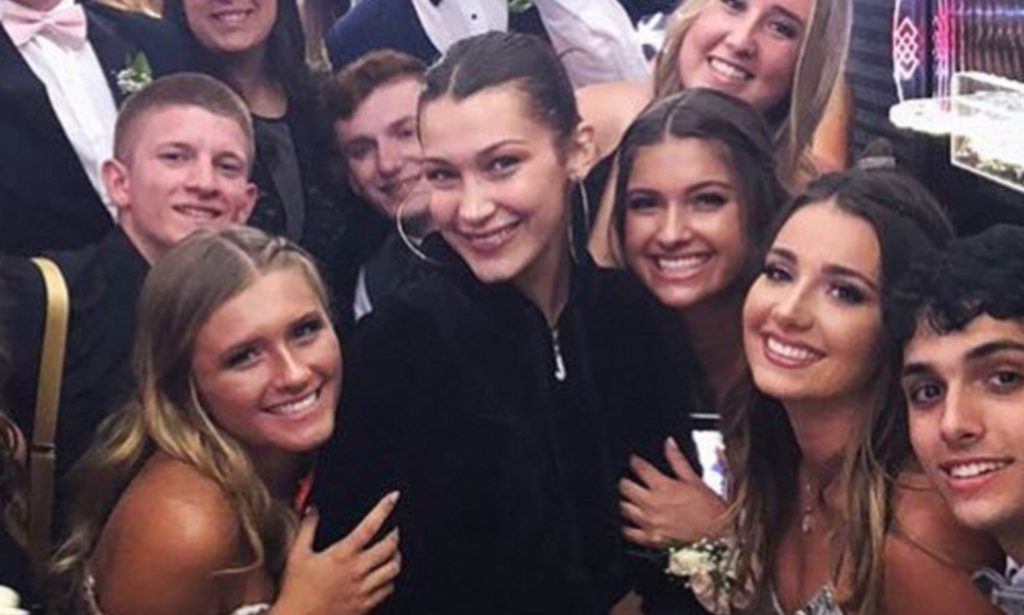 After running into a group of prom-goers while in the middle of a fashion shoot outside New York City, Bella decided that she wanted to join the Oceanside, New York, teenagers prom bus!  She attracted so much attention and posed for selfies with scores of teens. 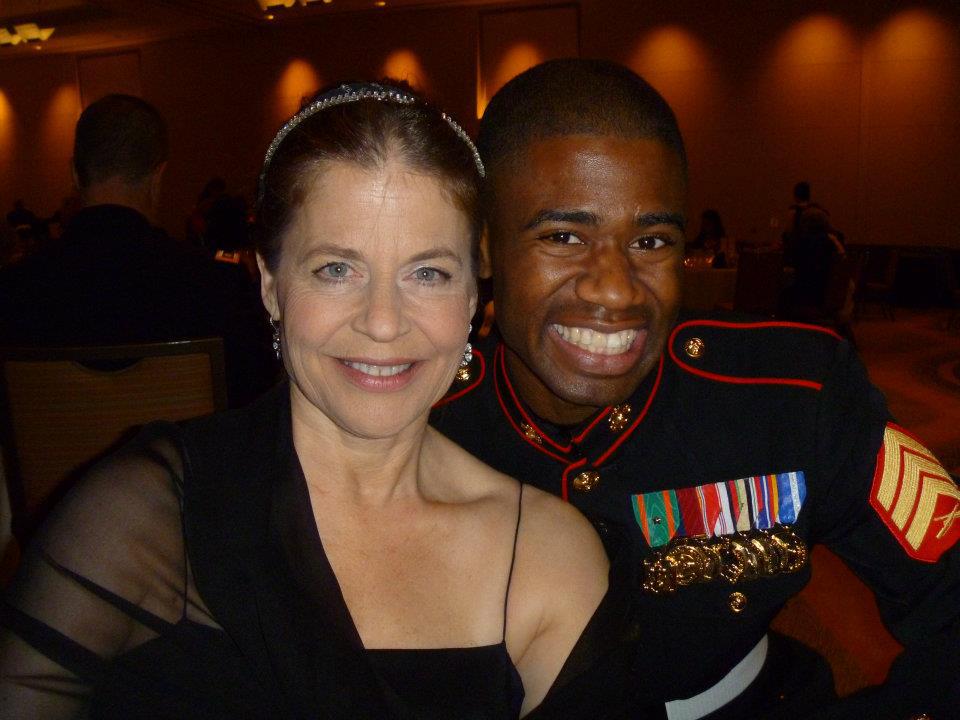 ‘Linda Hamilton, ‘Terminator legend, stepped in after Betty White at the invitation by Sgt Ray Lewis to the Marine Corps Ball in Westlake, Texas.  Linda even made her own YouTube video for the occasion.  She stated, ‘Rumour has it that you like your actresses vintage. I thought I would just take a shot here and try to find you.’ 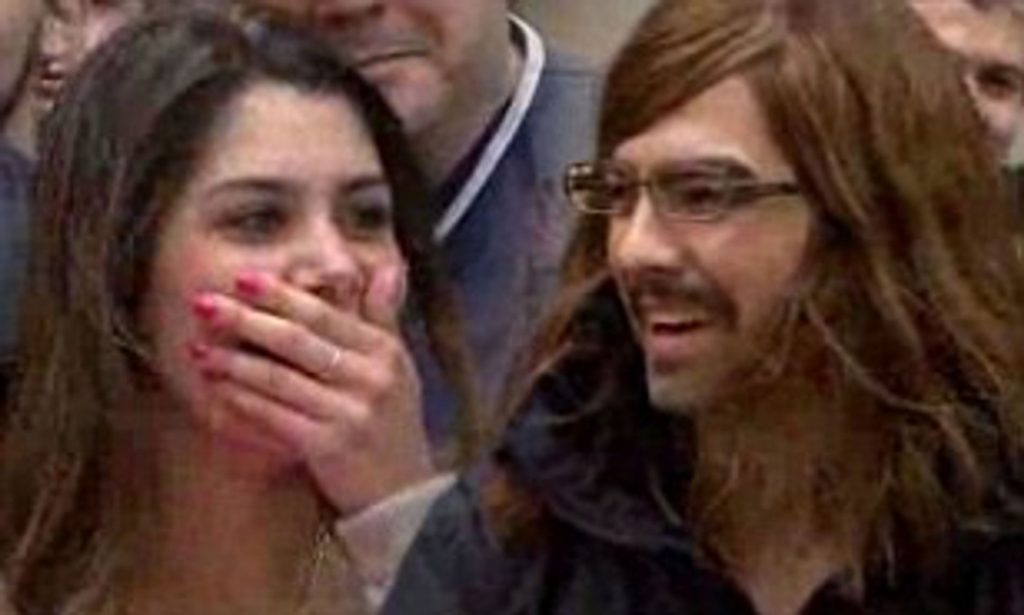 After making a counter proposal to huge fan Shaina, who just wanted Joe Jonas to go to her college prom with her, the singer showed up to the Today show in disguise and surprised the heck out of her. They eventually took photos together and reunited at his concert 3 months later. In 2013, Gigi Hadid had just starting out in the modelling world although she was still a big name due to her cameo appearances on ‘The Real Housewives of Beverly Hills’ (her mum was in it).  She went to her own prom in a red Herve Leger gown and took sister Bella with her When the Cannes Film Festival clashed with Elle’s prom, her date flew out to recreate the event with her. She shared this image on Instagram saying, ‘Reliving my Senior Prom! Thank you @basquitwat for flying out since I could not be home and making our prom night one to remember forever!’ UFC champion Ronda Rousey accepted a Facebook invite from Marine Lance Cpl. Jarrod Haschert in 2015 when he asked her to be his date to the Marine Corps Ball in South Carolina. She later told TMZ that Jarrod was ‘a real gentleman and a real sweetheart. It was the only smiling I’ve been doing, I think.’ 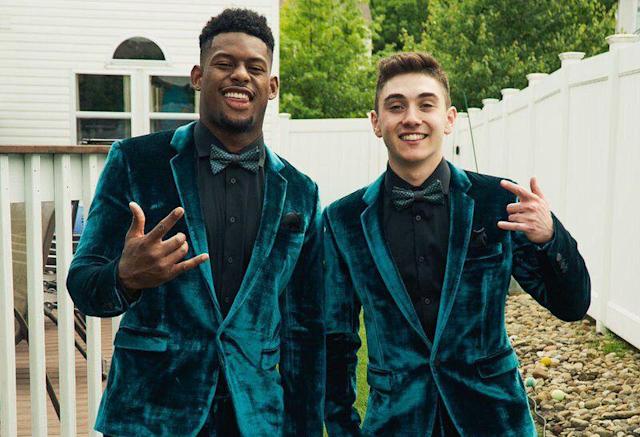 Football player Juju Smith-Schuster accepted a prom invite from a Pittsburgh Steelers’ fan because his date got cancelled at the last minute. The two arrived, in matching velvet teal suits.  Schuster wrote on Twitter, ‘Got a DM from him a while back about needing someone to go with, decided why not, had a great night at his school!’ 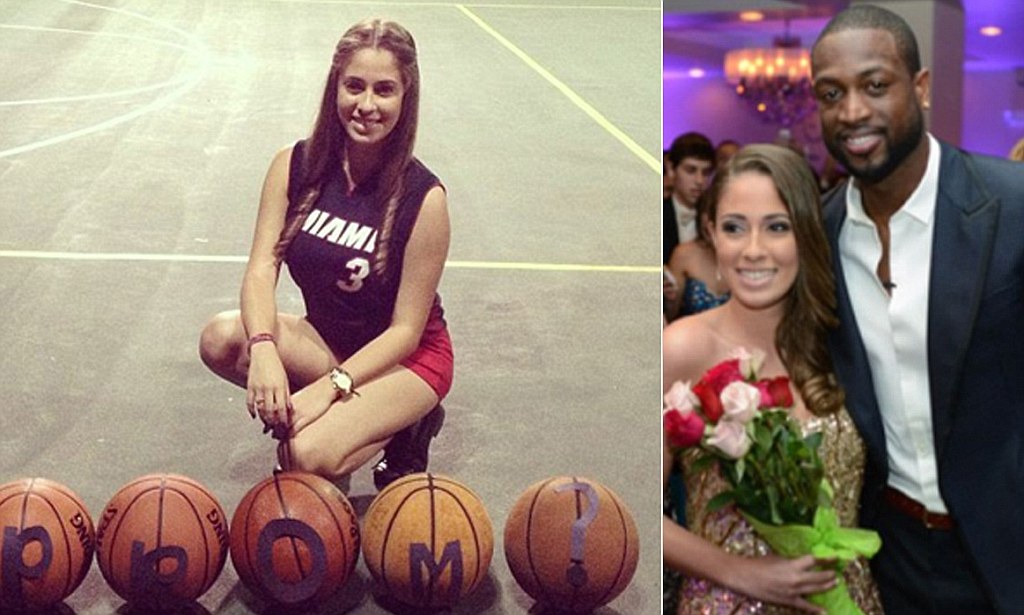 At first, NBA star Dwyane Wade declined Miami high school senior Nicole Muxo’s proposal on YouTube but he did go – to surprise her!  He even took photos with her family beforehand.  Nicole wrote on Instagram, ‘Never be 2 scared to ask,’ and ‘They might just say yes… #dreamsdocometrue.’