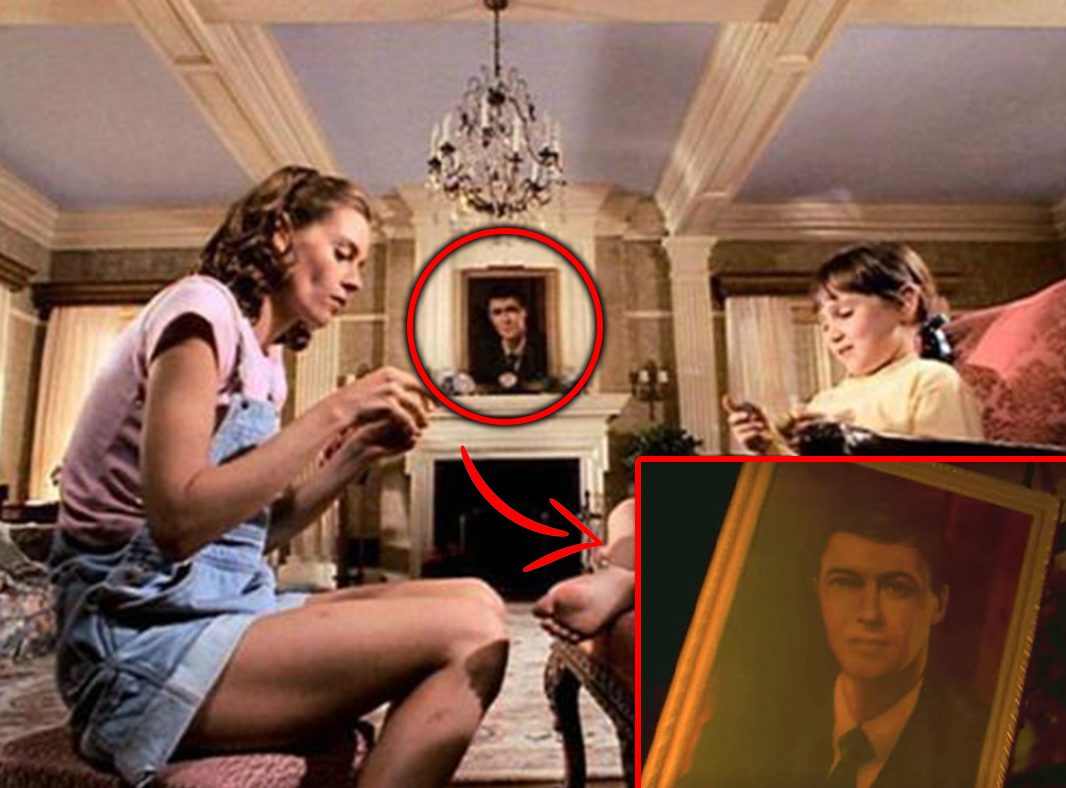 Roald Dahl passed away 6 years before Matilda was released as a film, so it was overseen by his wife. But to commemorate his memory and include him in the film as a subtle feature, his portrait is used in the film. His face was the face of the painting of Magnus in the movie. Liccy Doll is also an easter egg to subtly include the name of Roald Dahl’s wife who was named Felicity ‘Liccy’ d’Abreu Crosland. Liccy doll was Miss Honey’s doll in the movie, and she was very precious to her as a child – hence the dangerous rescue mission!

3. Matilda has another of Dahl’s books on her bookcase – The Witches 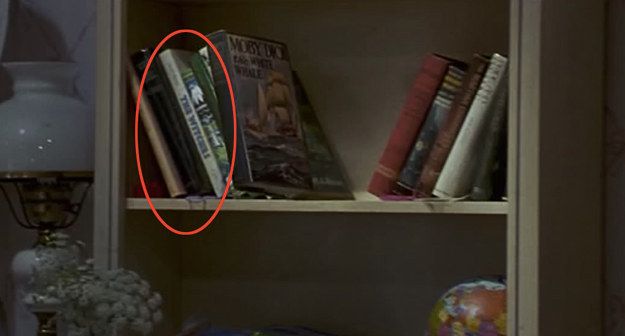 Of course, as one of the greatest children’s writers ever, it’s only right that Roald Dahl had another one of his great works making a feature. You can see on her bookcase at the end of the film, the story of The Witches. She has great taste after all.

4. Did you notice the ‘Thou Shalt Not Kill’ sign in Trunchbull’s office If anyone needed a daily reminder that she couldn’t kill, it was miss Trunchbull. And now we know this sign is there, maybe we should be thankful that the children were eventually allowed to exit the chokey. Although, we think she’s bad enough already…throwing children out of the window is still bad enough.

5. Cookie happily watched Trunchbull run out of the school We always get the impression that Trunchbull and Cookie were on the same side. Yet when it really came down to it, Cookie looked more than happy – and amused – to watch Trunchbull running for her life out of the school. She certainly wasn’t offering her any help.

6. Keeping animals in cages is one of the classroom rules I mean, you’d probably never think that this one had to be a rule. But there’s a metaphor here. Because Trunchbull liked to keep the children in a prison, cage like atmosphere. And it’s also ironic because Lavender placed the newt inside her jug of water. HA!

7. No fun and no pigtails were also amongst them Here comes the fun police… Amongst the hundreds of ridiculous school rules of Trunchbull such as ‘don’t breathe loudly’, there were also ‘no fun’ and ‘no pigtails’ – and we all witnessed how seriously she took that one! Who knew pigtails were so offensive hey?

8. Matilda called herself the ‘lost child’ Matilda’s childhood is really tragic. She is not loved by the Wormwoods and they neglect her as well as emotionally abuse her. We see on her bedroom wall she had drawn her own portrait which was titled ‘lost child’, highlighting just how on her own she really felt.

9. Bruce Bogtrotter ( Jimmy Karz ) did not even like chocolate cake 10. Mrs Wormwood loves Bingo so much, she has a Bingo bag The whole Wormwood family – apart from Matilda of course – seemed to share an adoration for Bingo. You can see their appeal, they loved anything  that could make them easy money without having to do any work. She was so devoted tot he game that she had a tote bag which read  ‘I heart bingo’.

11. And Matilda used to read I Love Bingo magazines Matilda, growing up in the Wormwood household had to devour any piece of writing she could get her hands on. Unfortunately for her, all she really had was the I Love Bingo magazines to read. Which, explains why she set off to the public library as soon as she could walk! You may have missed this little easter egg. On Mr Wormwoods white board at the garage there is a list of groceries, lotto tickets, Fritos, Jell-O and chips. It’s not exactly the healthiest of grocery list considering the two small children in the household.

13. There’s a tiger in the reflection of the toaster It’s not a real tiger, it’s a porcelain ornament of a tiger which can be seen in the reflection of the toaster. This is definitely foreshadowing the fact that Matilda is strong, brave and was about to become a force of her own. This is definitely homage to the fact that as she herself admits ‘I chose looks…you chose books’. She’s not the brightest, and wearing dark sunglasses in a dark room whilst watching TV definitely shows this fact – she may have been laughing along but she probably couldn’t even see anything.

15. Mr and Mrs Wormwood were married in real life 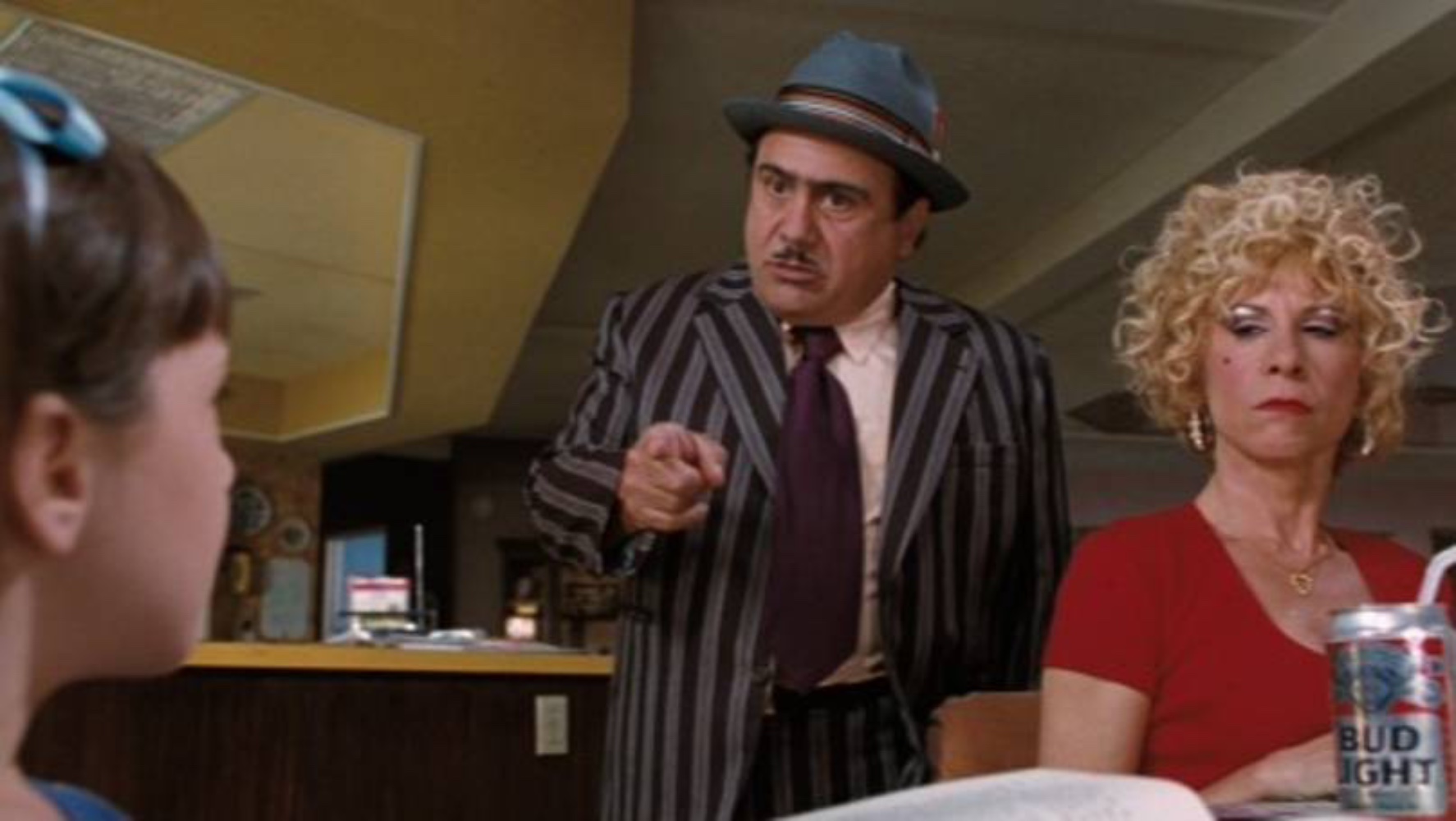 Mr and Mrs Wormwood, abominable as they are, you can’t help but appreciate the chemistry between the two of them. They bounce off one another, and even have that natural ‘tiff’ like behaviour of a real married couple. And that, is because they really are married in real life! 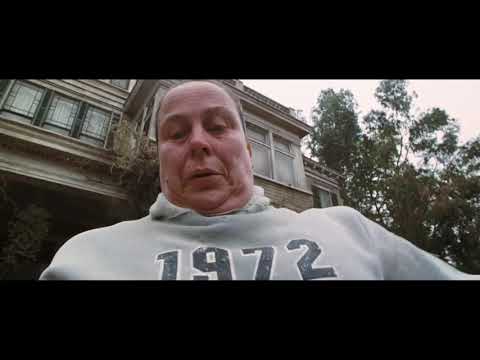 When we picture Miss Trunchbull, she’s red faced and sweating profusely. Of course, the makeup team wanted her in this way. But, it was also very much natural. It happened to be an extremely hot summer and poor Pam Ferris was stuck inside that suit – the sweat was very much real.

17. It nearly never made it to the screens! 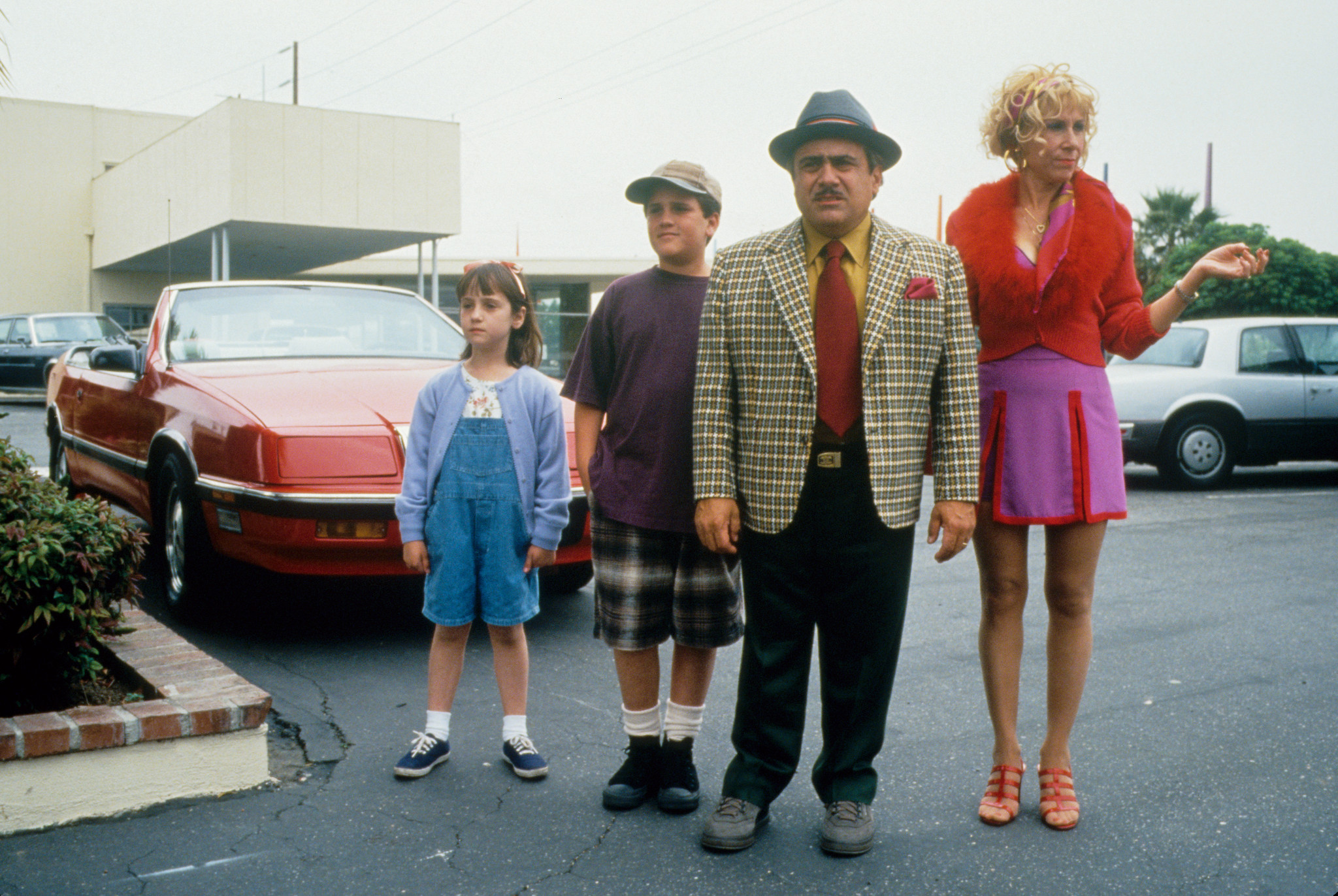 Matilda is hands down one of the bets films ever made – no arguments! Childhood would not have been the same without it. To think it nearly never made it to the screens because of the lack of success Charlie and the Chocolate factory and the Witches had… 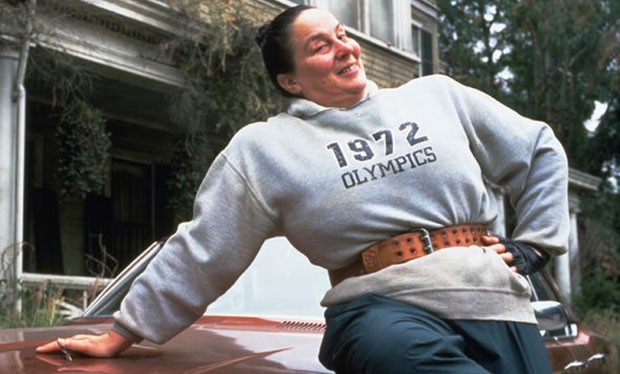 If you met Miss Trunchbull, you’d run away without hesitation. And it’s very difficult to separate Mara Wilson the actress, from her role. The strange thing is, she is apparently the complete opposite. According rh the case she’s one of the sweetest and most gentle people ever!

19. The effects were all man made Now with technology, movies are full of CGI. It’s so easy for effects to be done on screen. But back when the film was released in 1996 and the years making it, things such as this did not exist. So most of the stunts or magic effects were done using wires and strings. 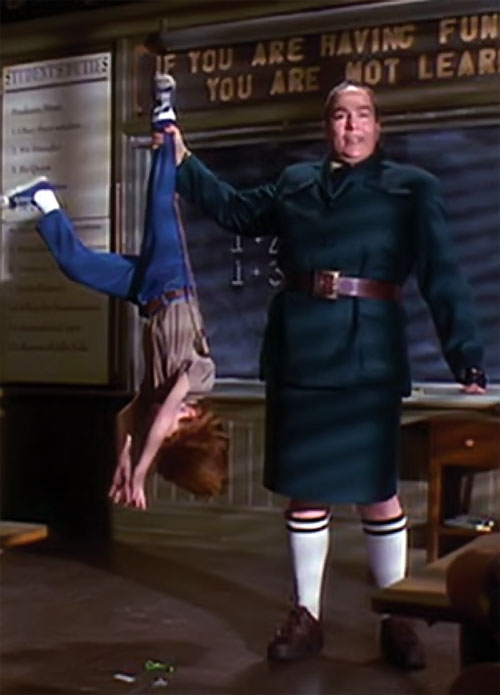 Pam Ferris, as we now know is actually a very sweet and kind woman. So, what she would do is try and avoid the children so that her fearsome reputation would make it easier for them to act on set. Knowing, that if she met them she would be nothing but lovely. This went out of the window and she admitted she fell totally in love with them all!

21. Mara Wilson designed her own doll Wanda in Matilda

Mara Wilson got to add many of her own personal touches in the movie. Director Danny DeVito said that Mara should create her own doll. One that Matilda would have come up with herself. And so she did, Wanda, the teddy she has in the movie was her very own creation come to life. 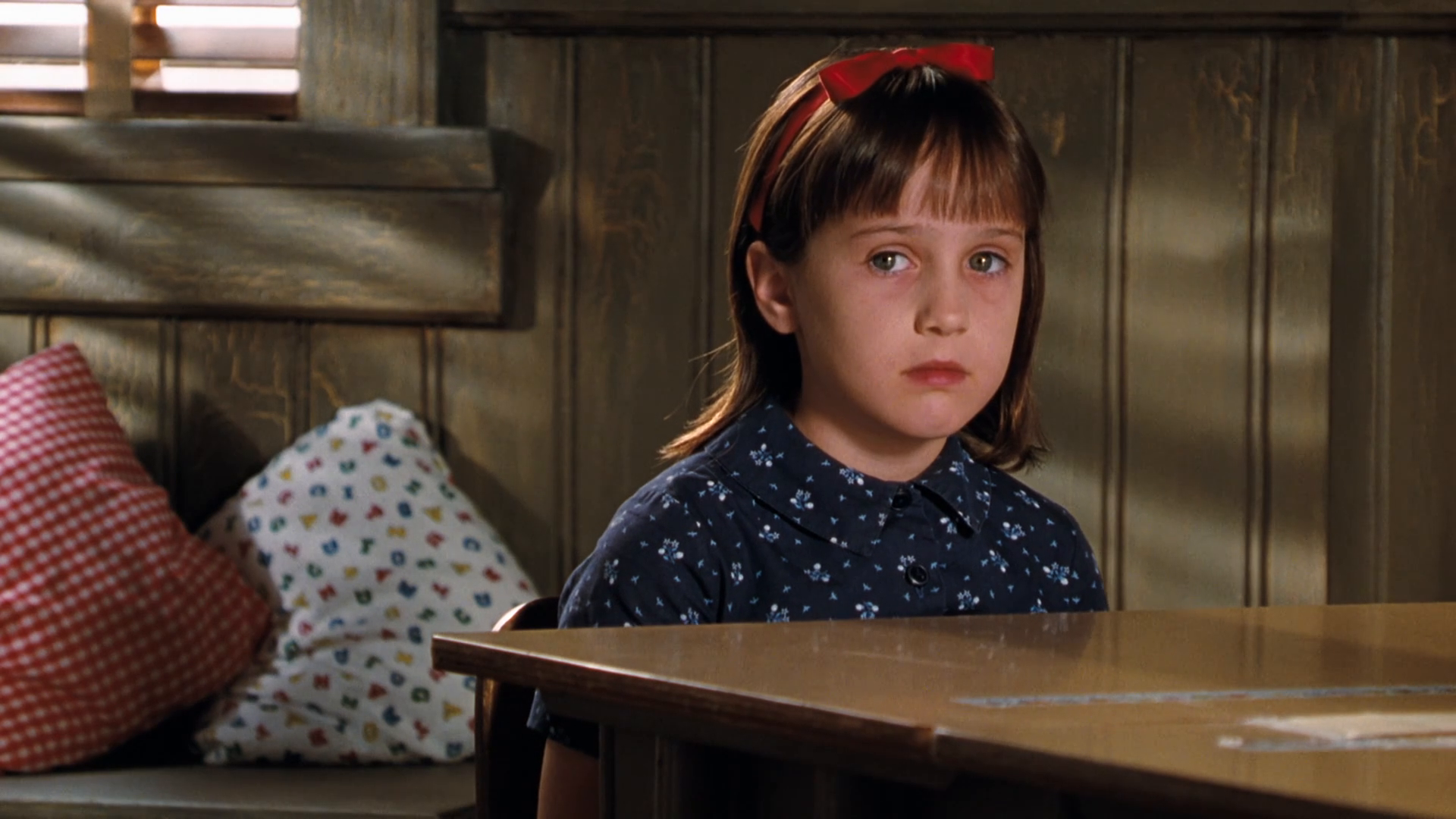 Matilda’s powers were referred to as whammy on set. DeVito would say, just whammy over here or whammy that object and Mara Wilson would know exactly what she had to do. They developed their own personal terms to add a little bit of fun and ease on the set.

23. Pam Ferris had to have a huge transformation to turn into Miss Trunchbull 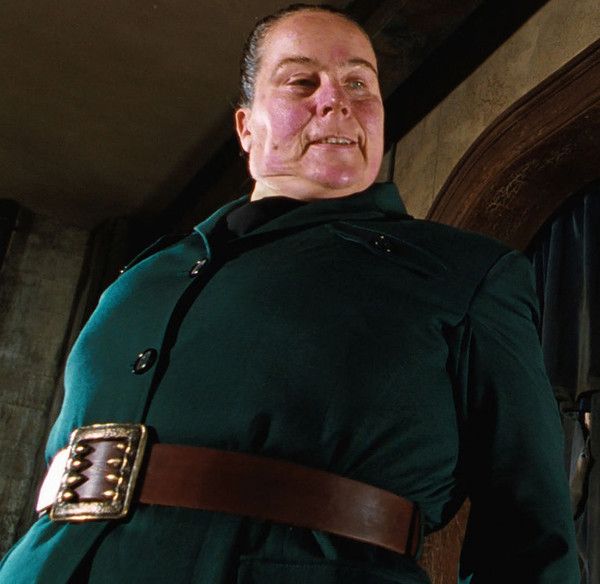 Pam Ferris had to go through a very big process to get looking like Miss Trunchbull. She had colouring to add blood vessels to her cheeks, dye to her teeth to make them appear more yellow. She had dye applied to her top lip to look like a moustache was growing. She had the whole works! In reverse…

24. The Chokey really was frightening 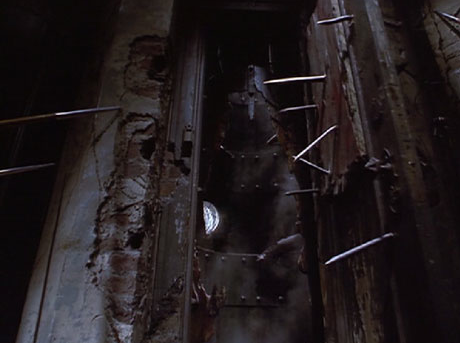 The chokey wasn’t just for show. It wasn’t a fake door behind which was a comfortable room where the children stayed for the sake of filming. Oh no, it was just as horrifying in real life. And according to Mara Wilson it smelled really bad – hence the disgruntles faces when they are allowed out.

25. Amanda Thripp had no stunt double for the spinning pig tail scene 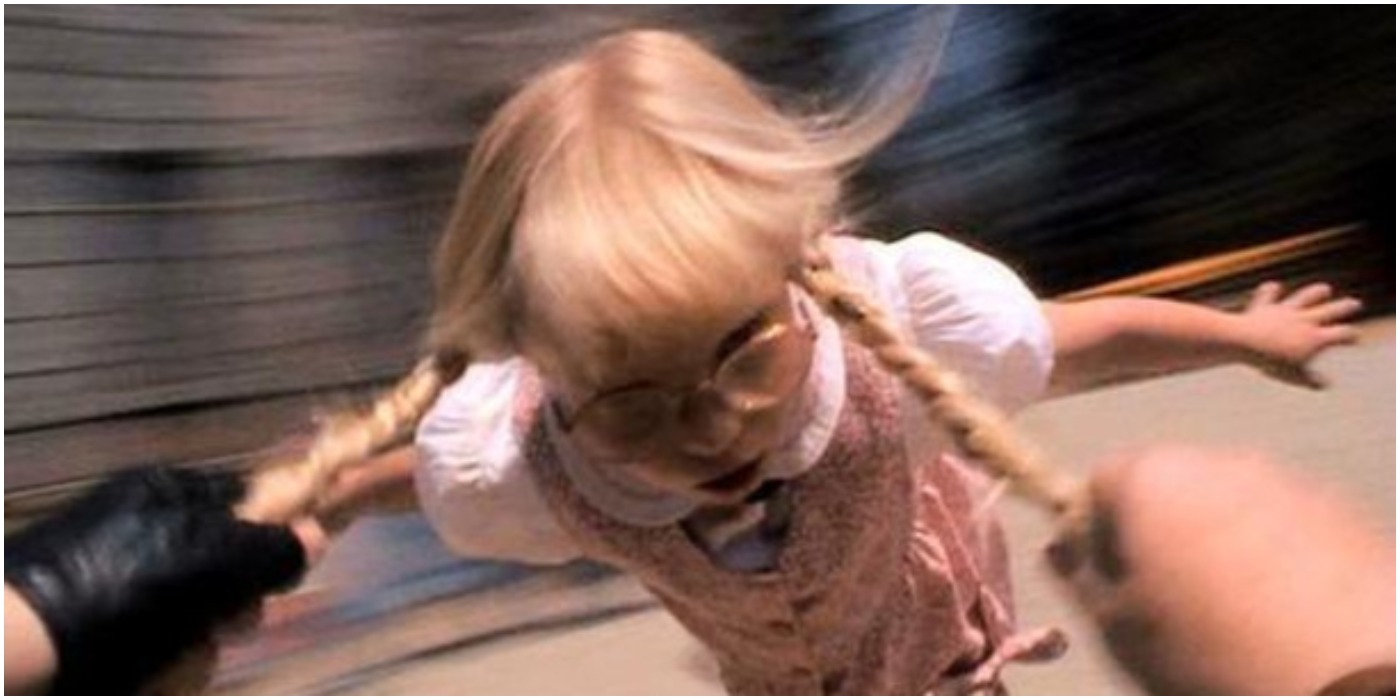 As both a child and an adult watching you can’t help but wonder about how this was filmed, either thinking it’s totally fake or thinking ‘ouch, that must really hurt’. And Amanda Thripp was more than happy to do the stunt herself. She was attached to a harness, given a fake wig and spun around by the Trunchbull. Brilliant. Sorry, but would Matilda even be Matilda without the infamous Bruce Bogtrotter scene? Absolutely not. Because prices of production  were high and this seen was additional to the story, producers debated binning it. Thank goodness they didn’t. ‘You can do it Brucey!’.

27. Trunchbull was based on a real character Mara Wilson discussed that “Our conversations led me to suspect that Miss Trunchbull was based partly on Lucy’s boarding school headmistress. Lucy and a friend had once tried to hide ice cream from the kitchens in their pajamas and sneak it back into their dorm late at night, but the headmistress caught them. She marched them back into her office and made them stand still until dawn, while the melted ice cream ran down their arms and legs.”

28. Mara Wilson was extremely shy during the dancing scene We all know the scene, the iconic dancing magic scene in Matilda. The one everyone wants to recreate. It was so good and she looked so natural that it’s hard to believe she was extremely self conscious whilst filming it. So much so that the director had the rest of the crew dance with her behind the set. 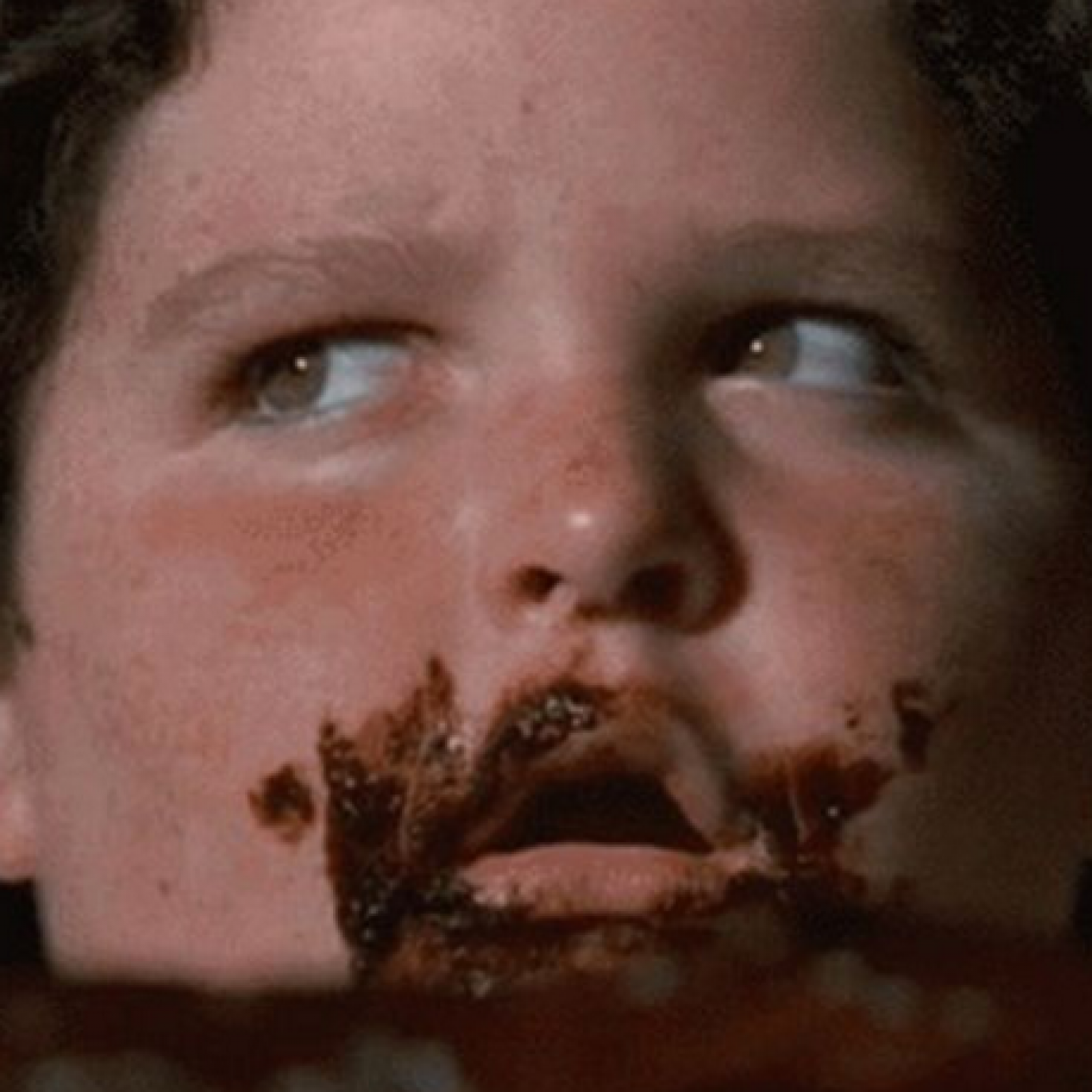 Continuity is always a huge thing in movies, because any little detail can let the whole film down and ruin the magic if it looks as though things obviously change. For example, for each scene featuring Bruce Bogtrotter, chocolate cake had to be painted all over his face.

30. Mara Wilson’s mother had a terminal illness throughout filming Mara Wilson was facing the toughest time of her life whilst filming for Matilda. As well as being so young, she was also filming the main role of a movie, whilst having to deal with the fact that her mother had terminal cancer. She said that the cast were her rocks through such a difficult time.