1. Peeing On Things – different reasons for cats and dogs 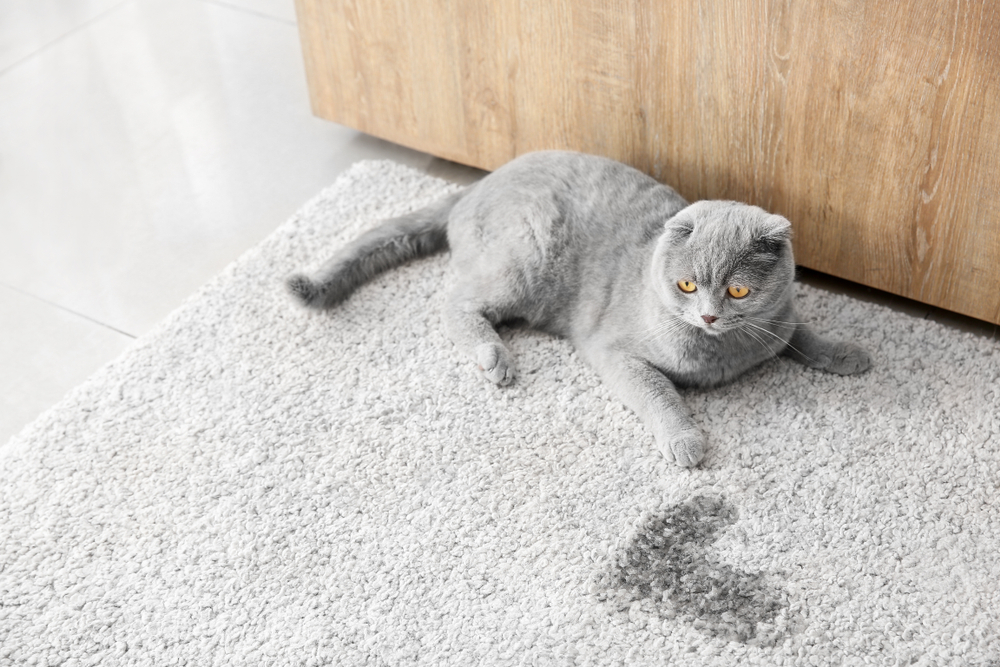 For cats, peeing outside their litter box can often mean they are marking their territory, probably because there is another animal in the house.  However, if they are the only pet, it may be that they are upset and to get your attention, they will pee, say, on your bed.  For dogs, it’s usually a case of a lack of physical exercise and it frustrates them. 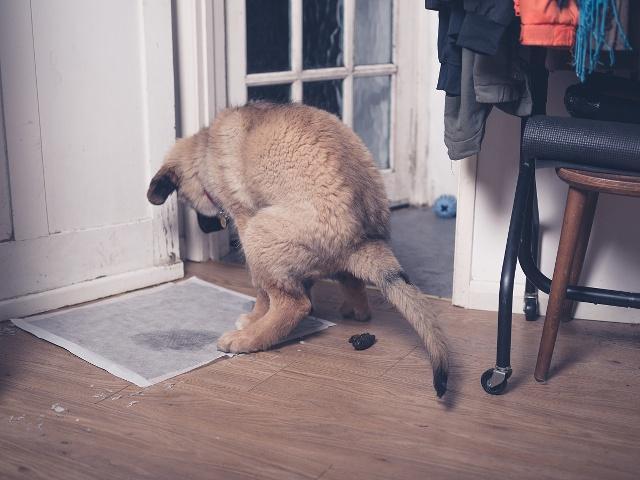 A pee is bad enough but when your pet defecates inside the home, you should take it seriously.  It could be a sign that your pet is fearful, so you should consider addressing your own behaviour.  Do you yell at the kids a lot or is there regularly slamming of doors?  Either of these could scare your precious pet.

3. Chewing your stuff – could be serious 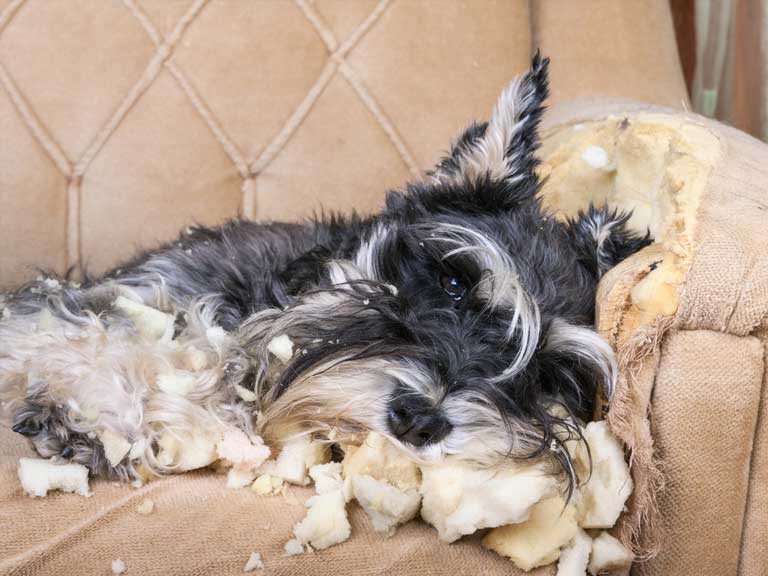 While dogs love to chew – its in their DNA,  their destructive behaviour may be the result of either fear, separation anxiety or lack of attention.  Punishing your pooch for destroying your new slippers, when there could be an issue going on there, will not do you any favours. 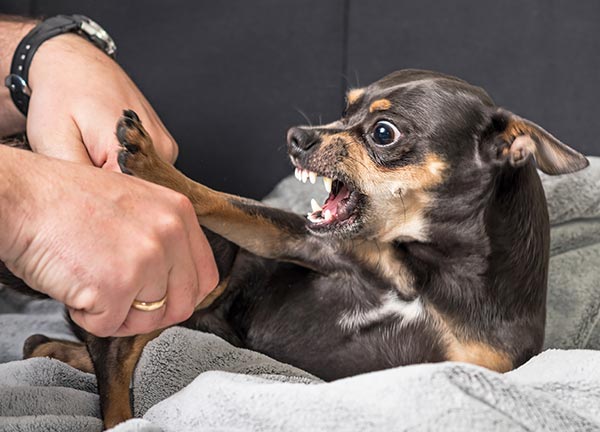 Even the cutest pets will revert to their basic instincts if they’re feeling threatened. If your pet starts biting you, it could be that they feel hurt or threatened in some way.  If they try to get their teeth into you when you are stroking them etc., check they haven’t got an injury or that they aren’t sick.

5. They Scratch – could be anxiety 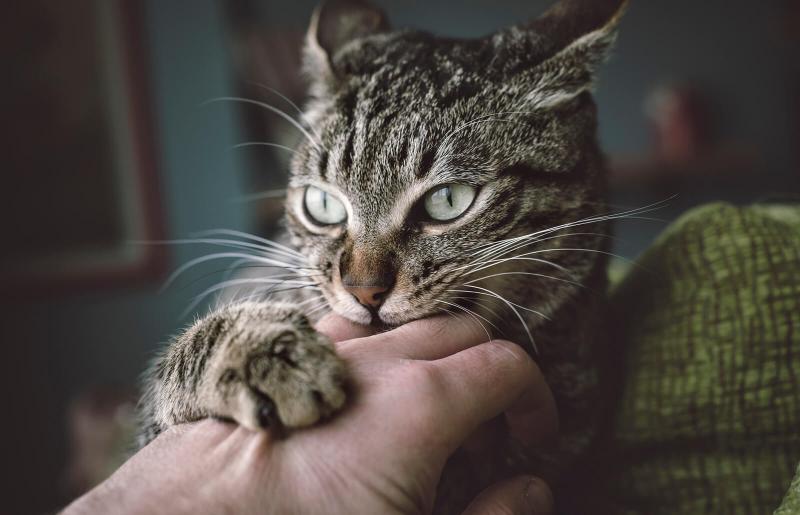 When a moggy scratches its owner, it’s something that you should deal with, as your pet isn’t feeling thrilled about their day to day life.  If your furniture or walls start to get scratches on them, this could be in response to an anxiety issue and shouldn’t be ignored.

6. Cats And Their Ears – flat and back Cats have no less than 32 muscles in their ears which allows them to express a wide variety of emotions. If their ears are pointed back or are flat against their head, these are signs of the three ‘a’s – aggression, anger and anxiety. If you’re getting this signal while petting your cat, you should stop.

7.  Growling At You – needs addressing 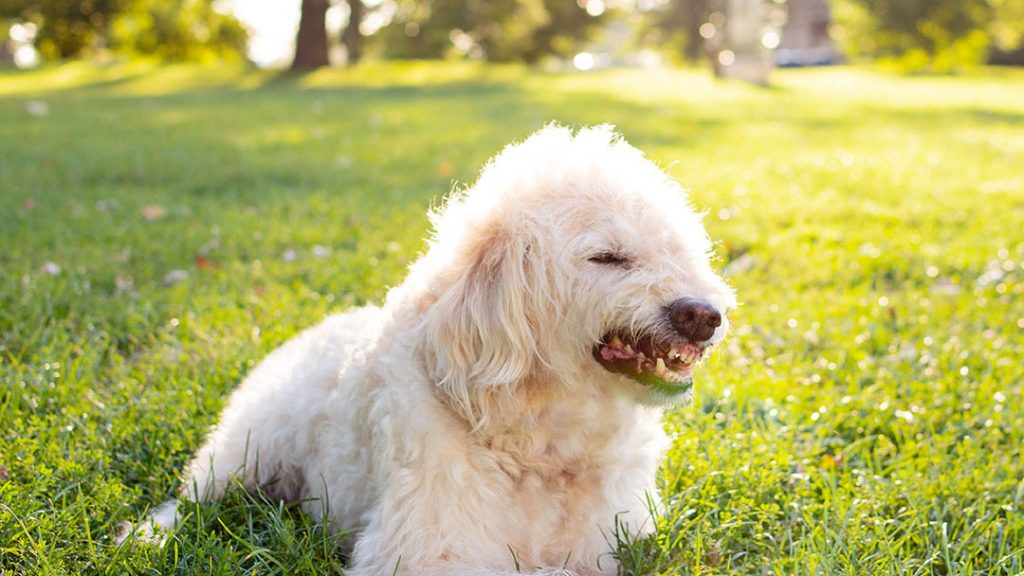 So we all know that dogs like to growl at the postman, delivery driver etc., but if you are at the other end of your pet’s growls, have a think about how you could have upset your 4 legged friend.  Are you feeling stressed yourself and are short tempered, causing the animal to be scared?

8. They Bare Their Teeth – the reason behind it 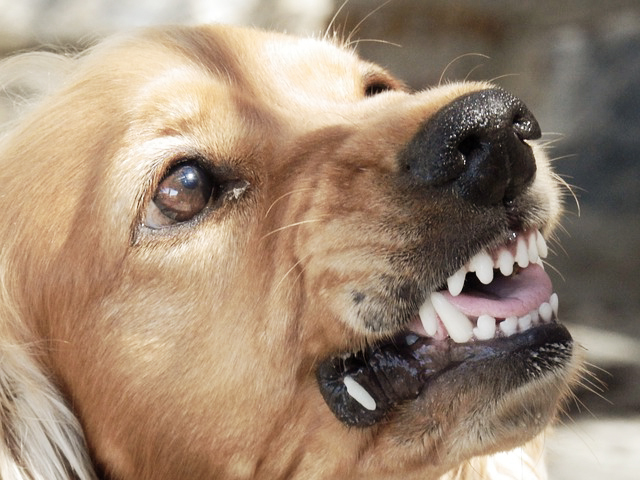 You, personally, may love to show off your pearly whites when you’re posing for a selfie but if your dog is exposing their bare teeth, it’s no laughing matter.  It’s showing a side to the animal that is aggressive and defensive.  However, if a cat opens its mouth wide, it’s to detect scents in the air.

9. They Ignore Your Commands – why the cold shoulder? 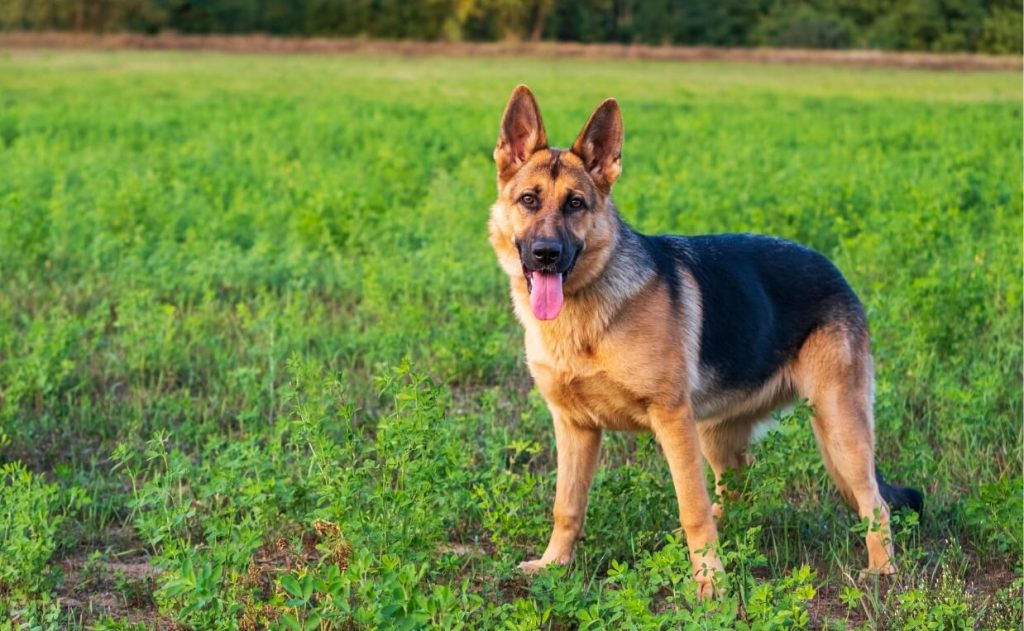 If your pet suddenly appears to be giving you the cold shoulder by ignoring your commands, you can take it that they are not happy with you.  Dogs might ignore instructions because they are upset or if they deem the command to be pointless – they are far from stupid! 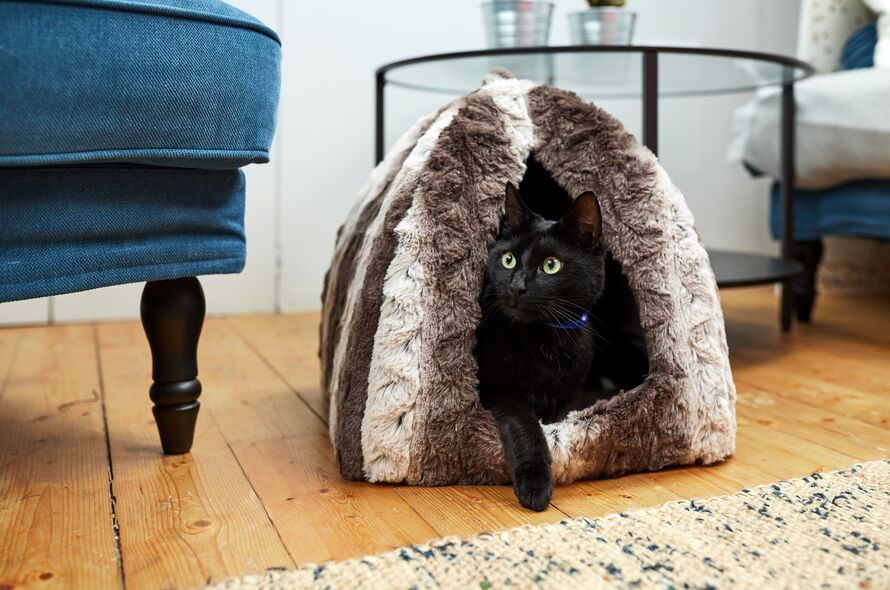 Have you ever heard a knock at the door and peeped around the curtain, to see an unwanted guest standing there?  It will have been easy for you to have ignored it until the person has gone away!  Your pet doesn’t have that luxury and when you put the key in the front door and try to greet your cat, they run and hide.  Vets say it’s a sign of being unsettled or frightened so work out what it could be. 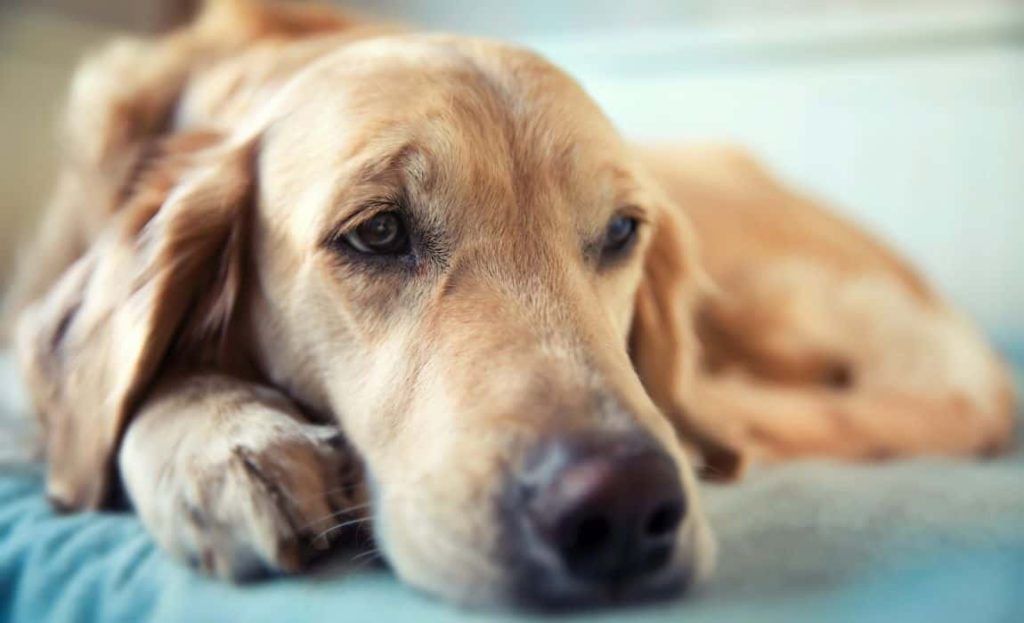 Image source K9 of Mine

Has your usually sleepy animal companion suddenly become an insomniac? Chances are they are feeling insecure at home and their anxiety is making them stay awake, looking and listening out for human sounds.  Maybe a very long walk before bed for your pet will do the trick or, if not, contact your vet.

12. Constantly Grooming Themselves  – it’s not that they’re over fussy Regular grooming is a great sign that your pet is content and healthy.  Over-grooming, though, is a sign they are unhappy and suffering with anxiety.  If they are grooming themselves and creating an actual bald patch, then it’s time to seek professional veterinary help.

13. They Yowl When You Pet Them – how to stop the wailing 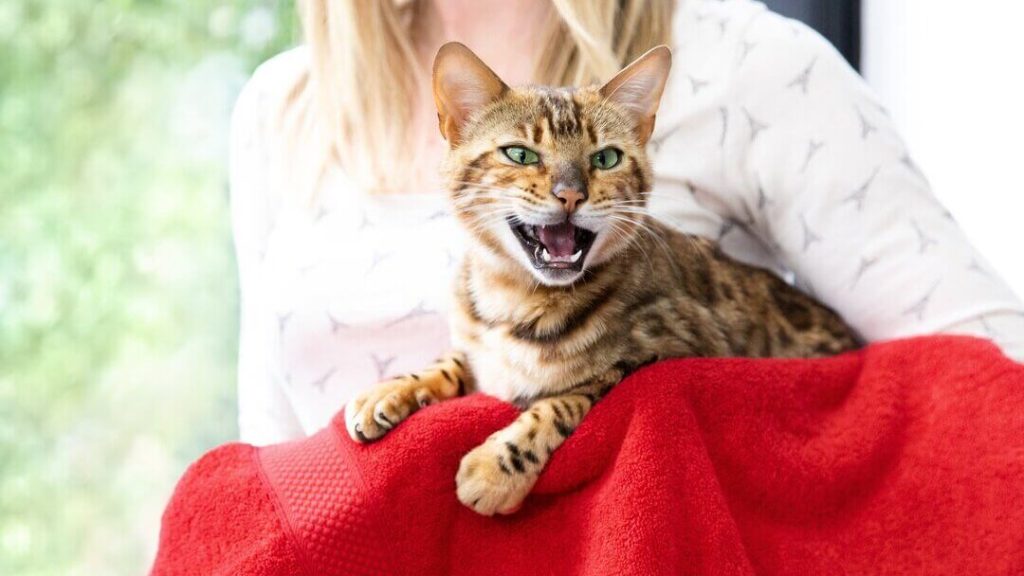 A nice little purr or a wiggling of the tail when you’re giving your pet some loving, is a good sign that your cat is living its best life.  A very loud yowl and you should be  concerned.  The furry feline is telling you to leave them alone.  Is it you or is it medical?  Find out the reason behind it, checking it’s not you.

14. They Refuse Your Treats – even if they want them Your pet is probably very intelligent.  Animals will show you if they’re uncomfortable around you or scared by refusing to take a treat.  Just check it’s not the same treat they receive after a visit to the vets, especially if it’s a jab.  It really could be as simple as that. 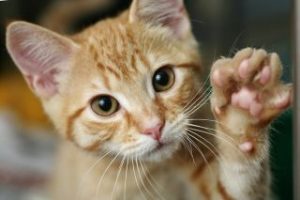 Have you ever tried to pet your cat or dog, only to have them shut you down before you are able to? Chances are they’re feeling peeved.  Dogs and dogs are both good at communicating their needs physically, including letting you know they aren’t in the mood for attention..

16. They Don’t Want to Play – may be depression If the tennis ball that used to make your dog go mad now seems like old news, it could be a sign they’re one unhappy pooch. Depression in dogs is a real thing and can often manifest in the same way as human depression does, including a lack of interest in their favourite things.  While some dogs seem to get depressed for no apparent reason, aggressive disciplining or separation anxiety may make them more susceptible. 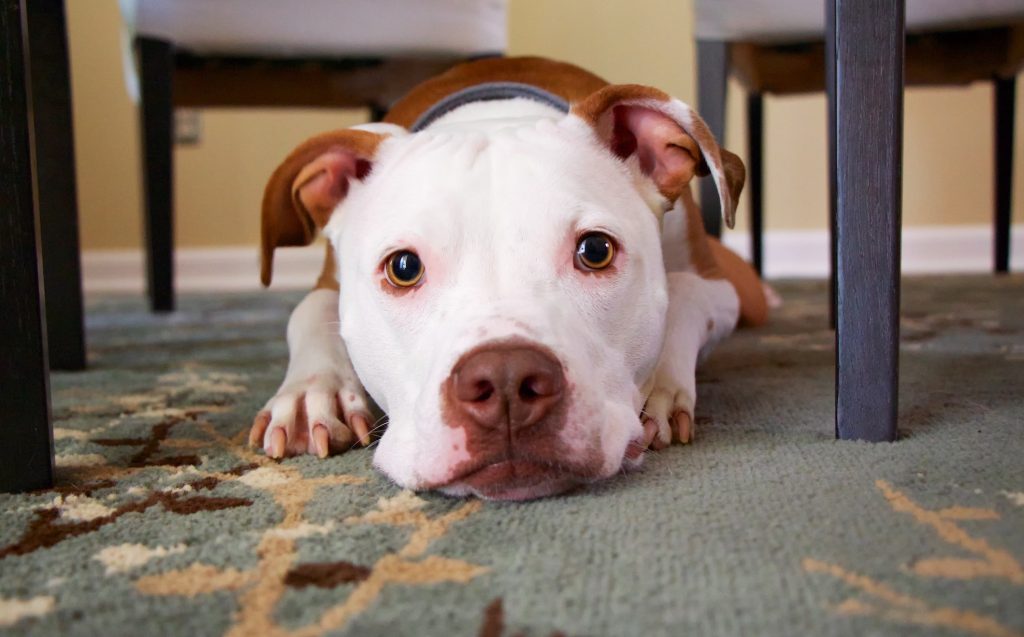 Eye contact is great in lots of situations such as job interviews, first dates and bonding with your new baby, to name but a few. However, if your dog is making direct eye contact with you, don’t take it as a positive sign.  Unbroken eye contact on your dog’s part may be a sign they are trying to assert dominance, feel threatened or are feeling anxious. 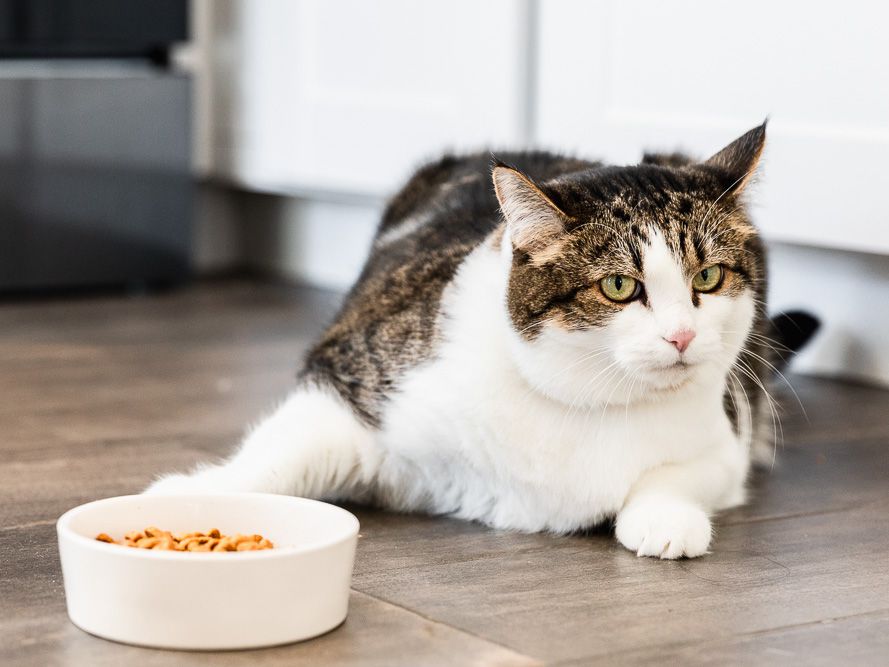 If your pet is suddenly looking at their full bowl of food and then looking away, that’s a sign something is wrong.  Pets who are feeling anxious about new animals or people in the home, a change of routine, or if they dealing with separation anxiety, will often forgo their food in direct response. 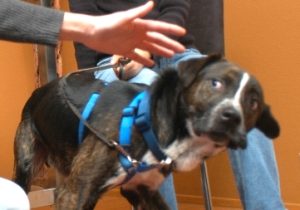 It’s hard for an animal lover to find their pet suddenly doesn’t enjoy their company any more.  If this is you, dig deep and try and realise why this is happening.  Do you shout at your dog or do you rush the morning walk as you’re running late for work.  Demonstrate patience and speak in a calm voice and that may be the answer.

A perfectly arched back is great if you are human, but not so good for those in the animal kingdom.  Cats often arch their backs as a sign of aggression, letting you know that they don’t want petting. Dogs will do the same if they’re fearful so make sure you build up trust with them and wait until they approach you for a stroke. 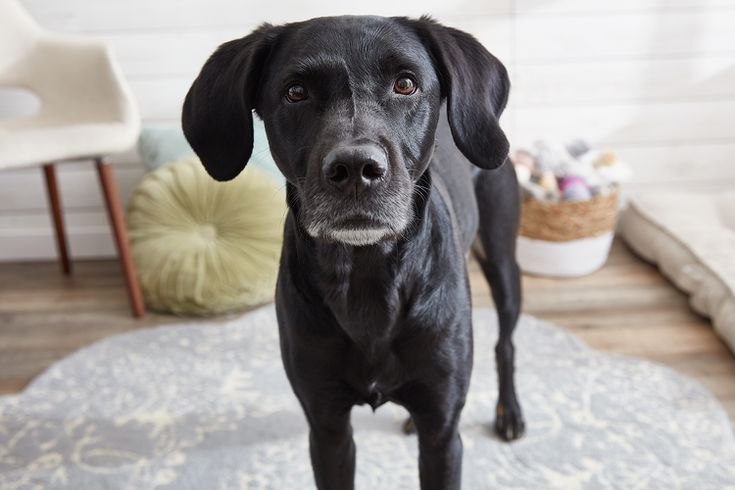 Take proper notice if a dog seems to be watching your every movement!  It could mean that they don’t trust you or that they feel uncomfortable around you.  They may even watch you from a distance and not have a good feeling about you and it worries them. If your dog goes out when you come in or vice versa, something awry is going on.  Animal behaviourists suggest that some dogs would rather leave the room than get into disruptive behaviour when they see their owner.  Leave them be, as long as they are eating their food and they should eventually come round. If your dog waits at the window for your partner to get back from work and gets so excited to see them, as if they have been apart for months, but all you get is a quick wag of the tail, it may be to do with the tone of your voice.  If your dog is a rescue animal, you or your voice reminds them of their previous owner. 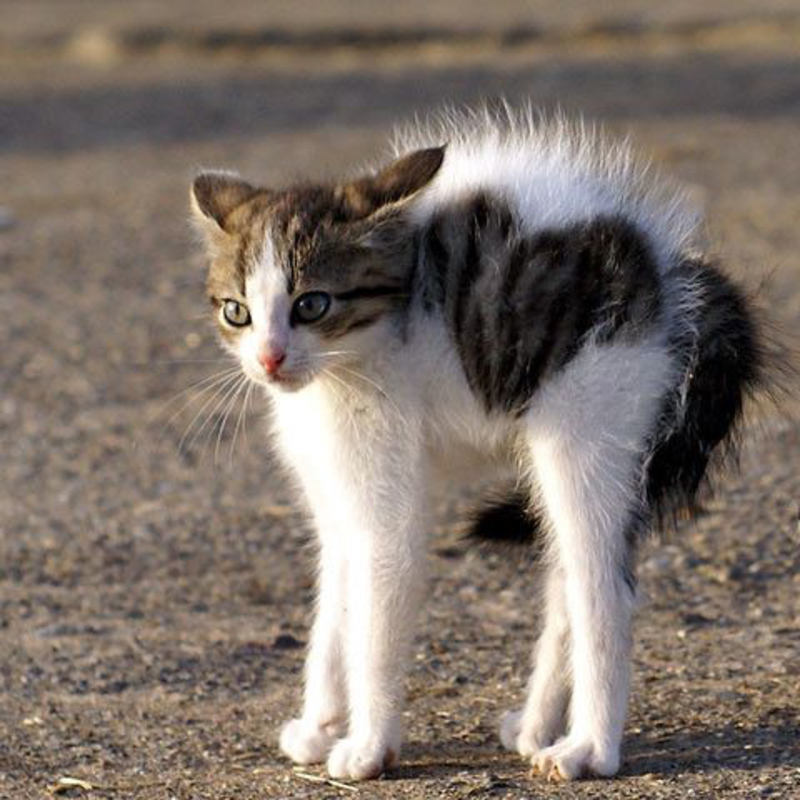 Watch out for a cat that’s hunching its back or curving it upwards, as well as their hair standing on end.  It’s a sign it is alarmed or angry and about to jump up at you.  If it’s a dog that arches, it means they are unsure of how you are going to treat them, again maybe as a result of being a rescue animal.

25. Barks At You – excessively

Canines communicate through barking but excessive barking can be a behavioural problem due to inappropriate and insufficient dog training.  Sometimes, if your dog is feeling anxious, they might be unsure as to how you are going to react when you see them. How can a tail ‘look mad’?  Once you learn how to read a cat’s tail to find out its mood, life with your cat will be much easier. Sometimes a cat’s facial expression is hard to read, especially as some cats look ‘mad’ all the time!  If its tail is lashing around, laying low and stiff or dragging along the ground, your cat might be annoyed, stressed, defensive or fearful.

27. Aversion To Petting – but still happy You will just have to accept that animals, like humans, are not all the same when it comes to affection.  If your cat or dog likes to be next to you but hates being touched, it’s nothing personal.  It is highly likely it’s from the time they were born and how their mother handled them. When a cat’s pupils going, round and black (dilated), it’s usually because of fear or excitement. When the pupils constrict to narrow slits, it’s a sign of anger, arousal or agitation.  Either way, a cat’s eyes can give you a good idea into how they feel about you.

29. Dog Tucks Tail In – what are they hiding from you? 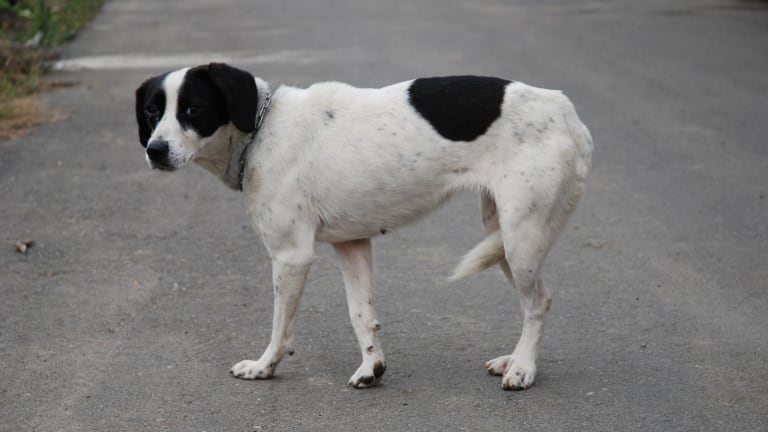 A dog may be afraid of you but still remain in your presence. By looking at their body language, you can see how they feel about a person. Having their tail lowered and tucked when they are with you, usually exhibits fear, discomfort and stress.  Once you’ve sussed it, you will both be happier! 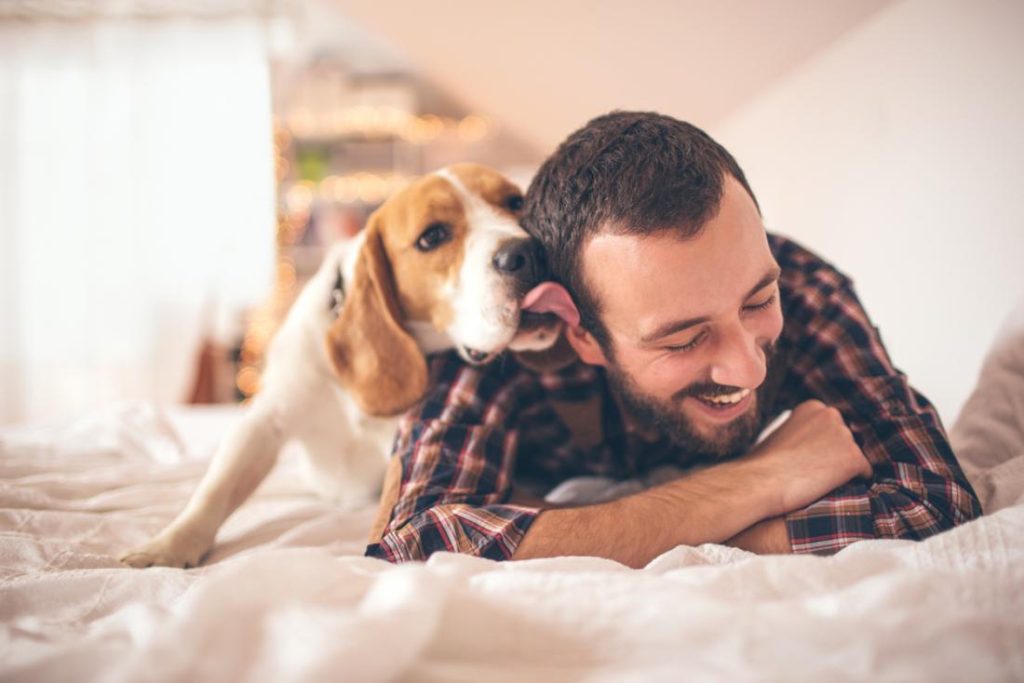 Don’t despair if your dog can’t or won’t bond with you.  If you are a loving pet owner, they will come round eventually.  A gentle belly rub (which all dogs love) nice, long walks, occasional treats and a comfy dog basket, will all probably give you dog brownie points.  Good luck!