Kendall Jenner with a profile pic that can only be described as terrifying, here leading with the tagline “It’s all about me” – which isn’t exactly a lie, but it’s also about every other member of the Kardashian brood, let’s be honest. And to top it off her URL address was Horse Girl. Here proving, like we said, that it’s not all about Kendall, is her sister Kylie Jenner – and in case you were in any doubt, she’s here to remind you that Kylie Rocks! Her MySpace page gives us a whiplash throwback to what she looked like before she had a lot of work done on her lips – amongst other places! In case you didn’t already know – because we sure didn’t – singer Lana Del Rey’s real name is actually Lizzy Grant! And doesn’t she look a bit like the singer P!NK in that profile pic? So if this throwback MySpace is anything to go by, she was releasing music as Lizzy Grant before using Lana. Getting down to the nitty gritty of Lizzy’s – sorry, Lana’s – profile, she has an eclectic mix of influences and interests, including Britney Spears, Motorcycles and… Morphine? We also hope she means the band Poison there, too, and not.. ya know… actual poison.

Of course Kim Kardashian would title her MySpace blog as ‘Princess Kimberley’. And go to the trouble to make her MySpace theme adorably pink. And if there’s anything that can prove that princess-like-mentality it’s the bratty opening statement of, “I’m a princess and you’re not – so there!’. Well that’s us told!

There’s so much happening with this bio from musician Kesha, including a possible shout out to the dad she wishes she had, and a bit list of a whole bunch of people she wants to talk about. To sum up.. She wants to get rowdy, she’s a bit of a stalker and her music is ‘rad’. Well there’s no denying she has talent! Because it’s not as fun if you don’t spell Beverly Hills the cool way with a ‘z’, is it? Let’s be honest, if there’s anyone you’d think had one of the most fun MySpace profiles, it has to be someone like Katy Perry. That profile pic says it all – and is that a giant M&M or a weird handbag?

8. Bonus: She’s Not A Vegetarian, But It’s Okay Because She Drives A Hybrid Luckily for us, Katy Perry took the time to put a LOT of personal info and interests on her MySpace profile for the world to see. We wonder if her dad still wakes her up even now at 7am to go to garage sales? We don’t think partner Orlando Bloom would be too pleased with that one… Wouldn’t we all, Harry, wouldn’t we all! Though now that he’s a superstar hanging around with the big crowd, maybe he’s met Henry Cavill since this! According to Harry Style’s MySpace, he’s an Aquarius for all you astrology people out there, and he was single at this point – something his fans can only dream of for him these days. Is there anything better than a cheesy vacation pic from when a celebrity was younger? Proving that they were all like us at some point forced on a 2-week-all-inclusive trip to somewhere abroad and probably cliché. He looks like he’s having fun, anyway – and surely can afford even better vacations these days.

11. Taylor Swift: I’m Not Like Everybody Else Because 13 Is My Lucky Number 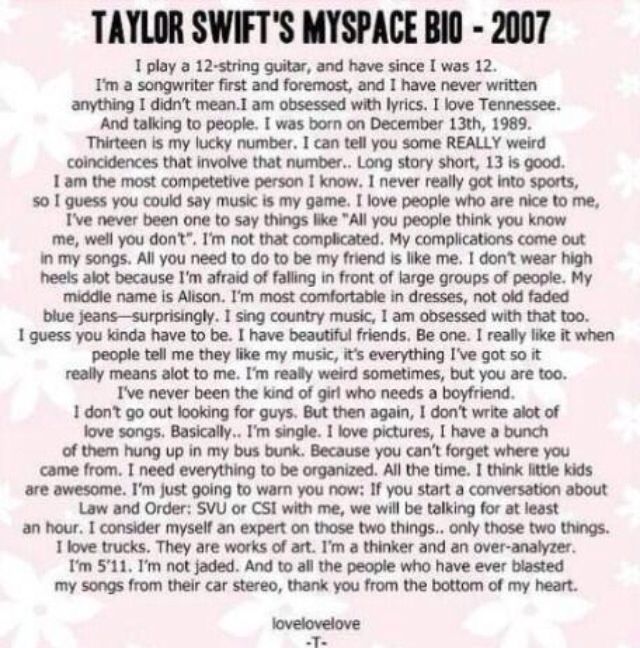 Taylor Swift proving she was edgy by throwing superstition out the window and claiming 13 is, in fact, lucky for her. Bonus points for her pretty pink and white background though! Nothing better than a MySpace profile design that’s easy on the eyes. She’s come so far since “not wearing high heels a lot”. One of her MySpace potentially-cringe pics shows Taylor revealing her bright yellow spelling bee champion t-shirt! Good for you, Taylor! She’ll be able to use that spelling efficiency when writing her songs for her latest albums, we’re sure. And we thank you for it, Taylor. Rihanna using her MySpace profile for exactly what it should be used for when you’re a young, up-and-coming music artist trying to plug your tracks! Here she’s showing off her album ‘A Girl Like Me’, which was actually her second studio album – and needless to say, she’s done well since. 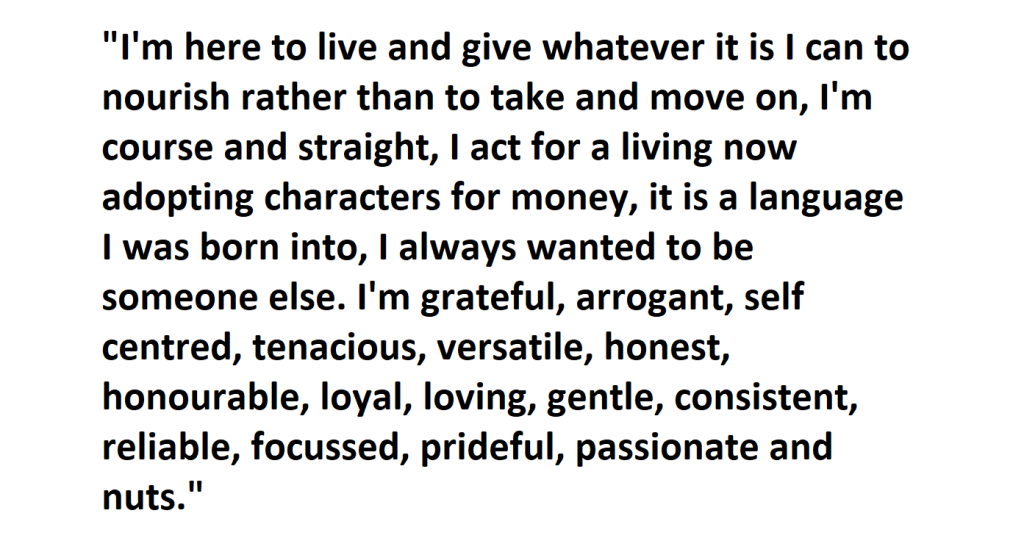 Tom Hardy’s bio was an absolute legendary read – he left no crumbs. And we love a self-aware king who admits he’s arrogant and self-centred.. though he seems quite humble these days, so maybe a lot has changed since his MySpace days. Imagine posting that you’re “adopting characters for money” and then going on to play Bane in Batman. Proving that Tom wasn’t good with just words – his photos were iconic (and cringe, let’s be honest) too. It all checks out the fact that he admitted he was arrogant and then posts posey selfies like this. He obviously loved himself, but we loved (and love) him too, so it’s all good. 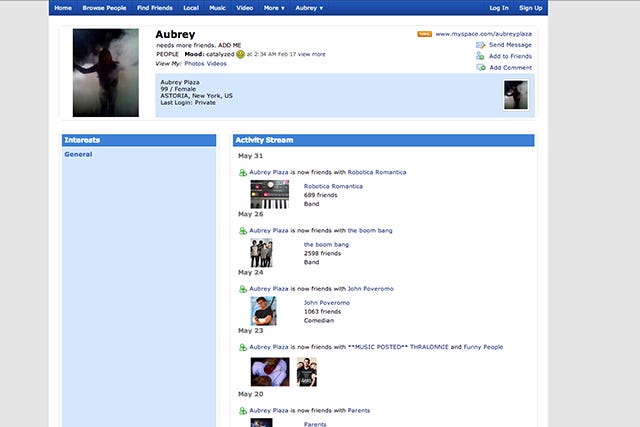 Aubrey Plaza over here not only connecting with friends on MySpace, but actually putting out a public plea for more friends please. Maybe she just wanted to be popular? We’re sure she has plenty of friends these days, though, if her successful career is anything to go by.

17. Nicki Minaj: Playtime Is Over

Of course Nicki Minaj’s MySpace profile page would be bright pink! She never changed really did she? Here she’s plugging her own music and showing that she’s always been this extra and this iconic even from her MySpace days – nothing cringe about this, she’s just serving. 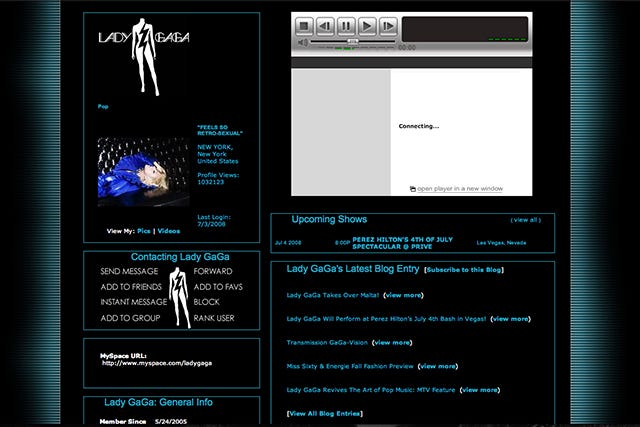 We see what you did there with that tagline, GaGa! We also love the design with the ziggy-zag and rather futuristic aesthetic – it gives us very throwback vibes to that first ‘Just Dance’ video and Gaga’s original style (which, safe to say, has come a long way since, hasn’t it?).

It’s safe to say that everything Kanye has done since the days of MySpace is probably more cringe than his actual old profile. He clearly didn’t get the memo about how to crop pictures properly, but as his tagline so perfectly sums up, “Our work is never over”. It never seems to be for him, anyway.

20. Justin Bieber: Is It Too Late To Say Sorry For This Cringe? 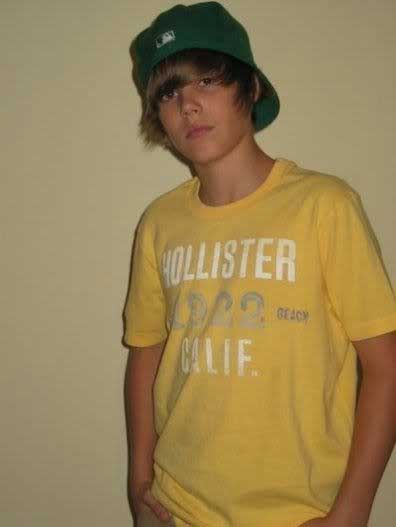 You better Belieb this MySpace throwback is a cringe – back when Justin was just a little kid posting those cliché young-guy-with-side-swept-fringe-trying-to-make-it-in-music. His profile included, “If you guys see any imposters pretending to be me, please tell everyone on their friends list”. So he was the real-deal even at a young age. 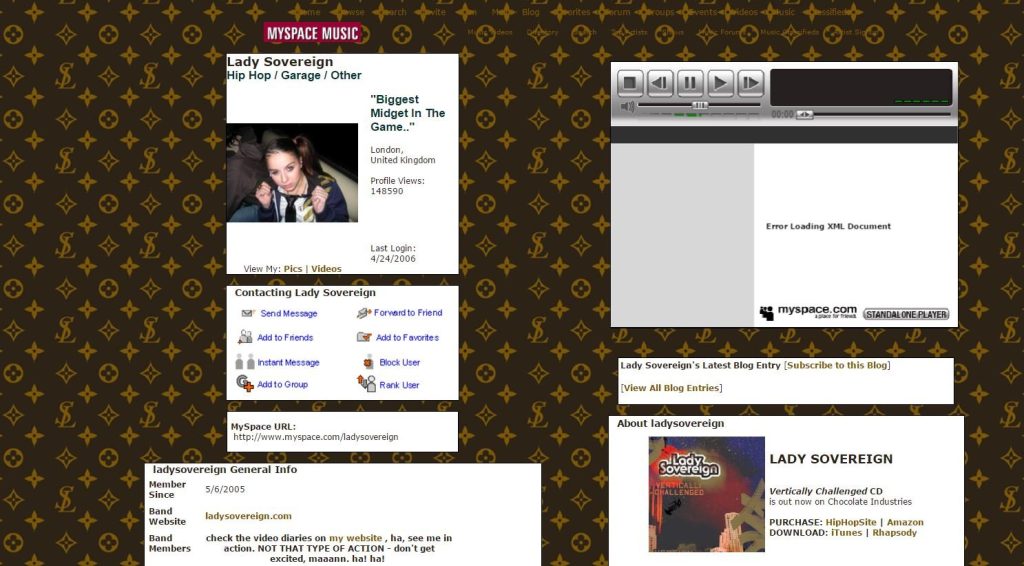 Across the pond was a female rapper name Lady Sovereign from the UK, who seems to have faded from existence. But that doesn’t mean her MySpace profile did! On it, she even linked to the ‘Sov Shop’ where you could buy everything you need to look just like her – if you wanted that. Tom Hiddleston did the right thing that many celebs should have done when becoming famous, and he actually deleted his MySpace profile – but we do know some of the details, which included his favorite film apparently being Meet The Fockers, and also a quiz revealing he’s 67% Supergirl.

23. And Now… When Celebs Seriously Embarrassed Themselves On Social Media! First Up: Chris Evans, When He Accidently Posted A P*nis Pic 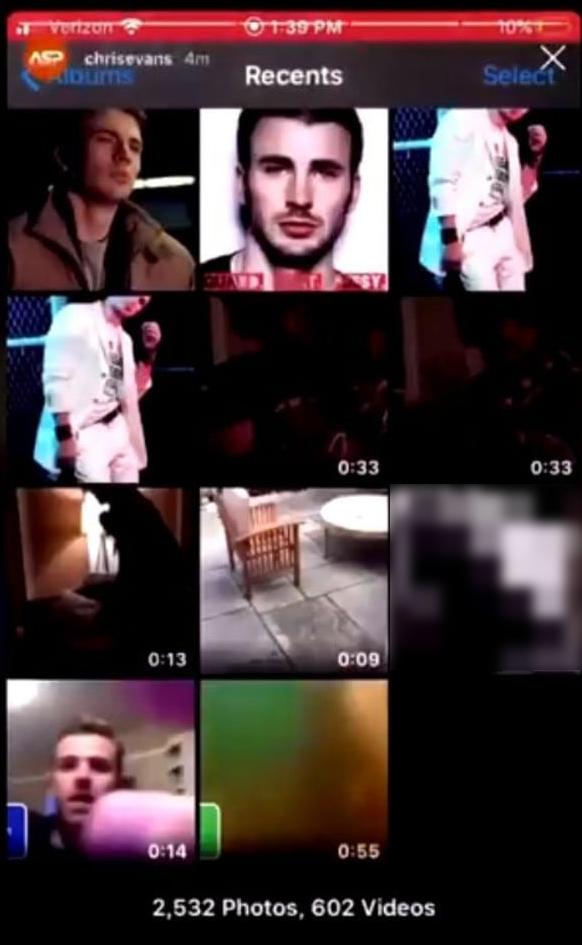 And no, we’re not going to show it to you! For a guy that says “That’s America’s a**” a lot, he apparently had a different body part in mind when he did this! The actor was sharing a screen recording with his fans on Instagram of an innocent family game he’d been playing, which then turned into a serious genitalia jump scare. 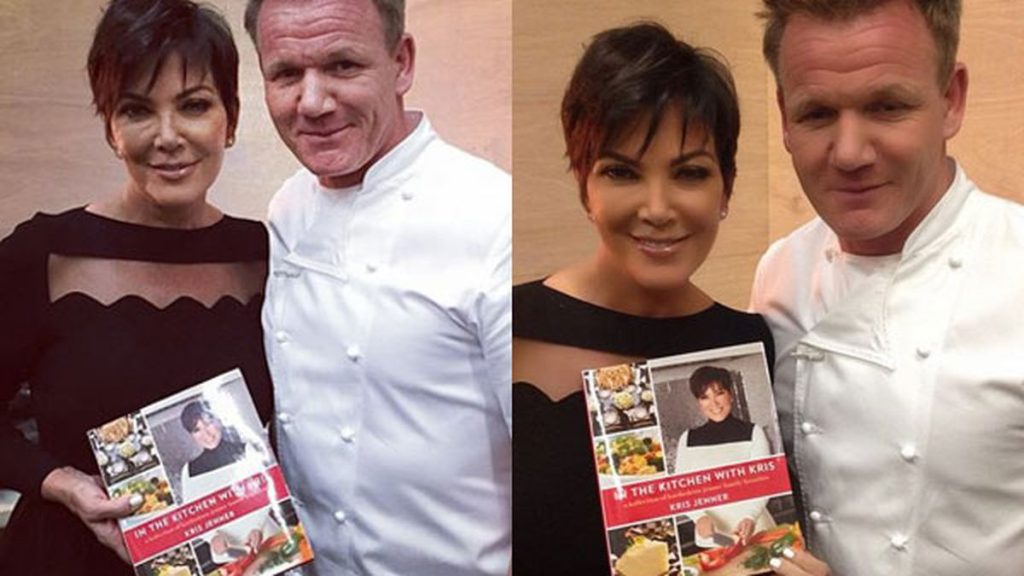 The problem with taking a photo with another celebrity is that they’re probably going to post the same pic to their social media, too – a lesson Kris Jenner learned when she posted a very edited version, and Gordon Ramsay posted the original. Her version had smoothed out all the wrinkles and lines on her and the chef’s face – while his revealed them in all their authentic glory. 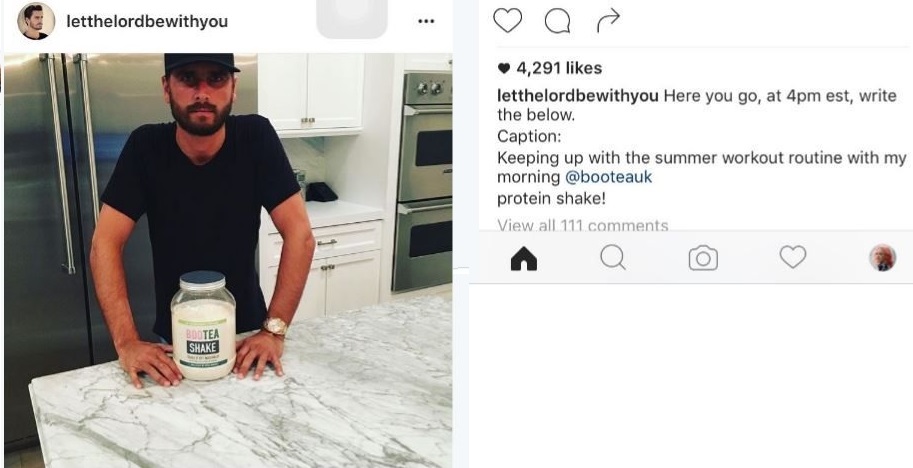 Like all good celebrities, Scott Disick was supposed to be using his influence to plug a very important product – but instead of making it sound like his own endorsement with his own words, like you’re supposed to, he just copied and pasted the PR email into the bio box before very swiftly deleting the mistake.

26. Rita Ora Dropping New Music If She Got Retweets – But Nobody Cared 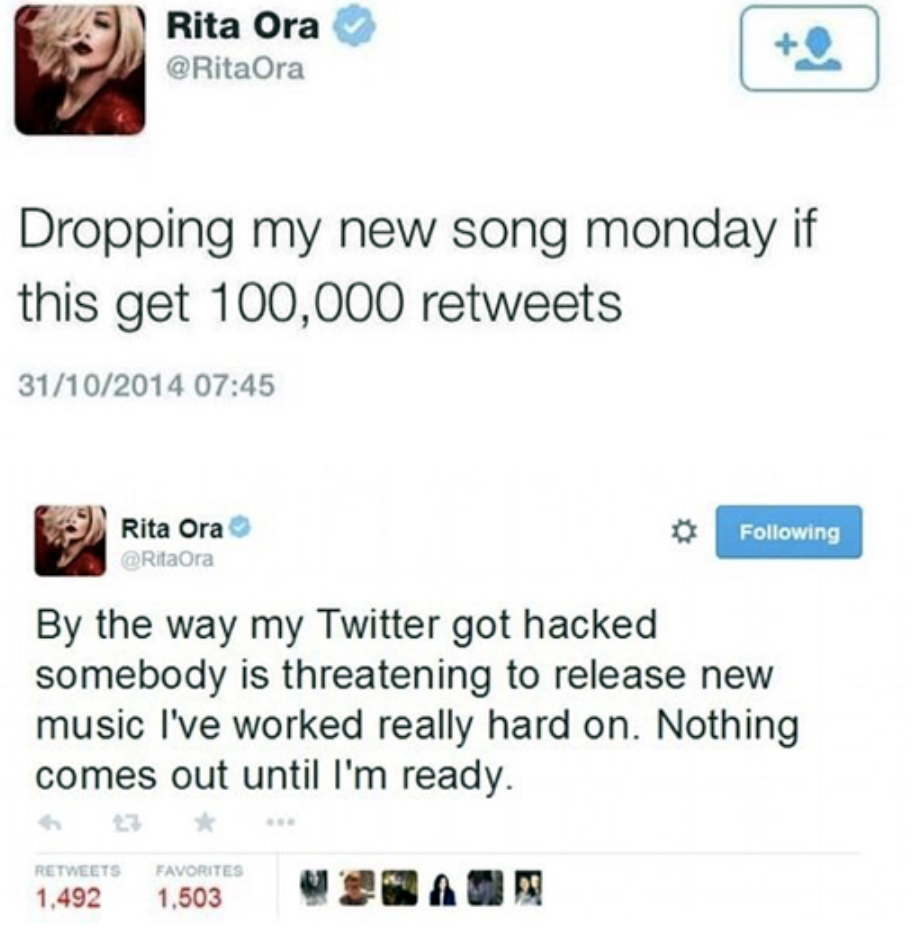 When singer Rita Ora Tweeted that she’d bless the world with her new song if her post got 100,000 retweets, she probably expected the world to stop in their tracks and retweet right now, with 100,000 done by bedtime. But the cringeworthy truth was that she never got enough retweets, and then backtracked and said she was hacked. 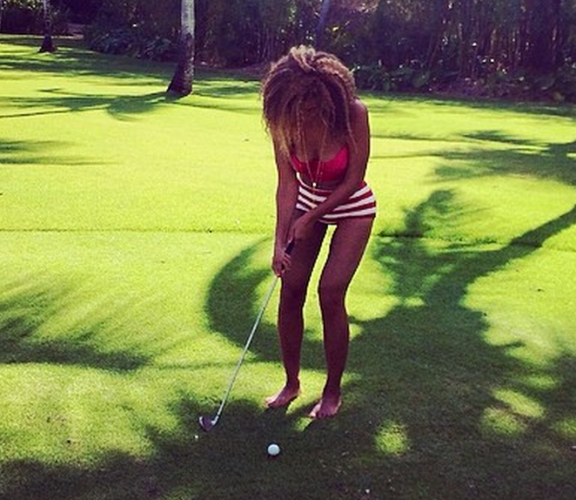 She may be the queen of the pop music industry, but she’s definitely not the queen of Photoshop! The thing we can always rely on Beyoncé to be is beautifully curvy, which apparently she forgot when she tried to slim down her legs in a golfing pic which had them looking very… weird.

28. When Mary J. Blige Tried To Tweet About How Smart She Was – While Making Typos 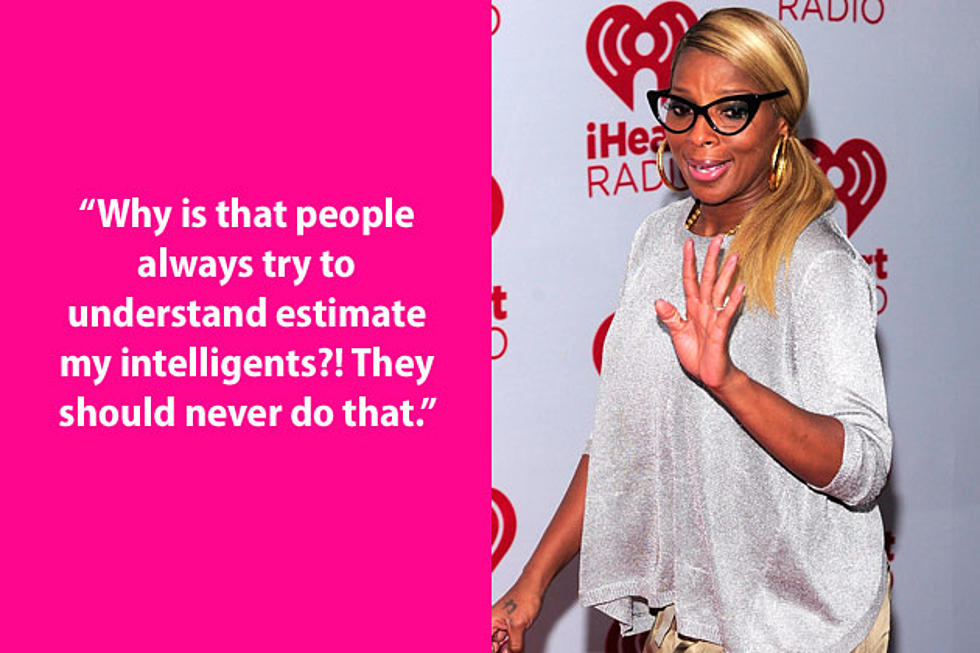 The singer was trying to make a serious post about how people keep questioning her intelligence, and why she needs to explain herself… unfortunately for her, the Tweet didn’t make too much sense owing to the very obvious typos – and more than one at that. It’s a little surprising you can make so many mistakes in such a tiny sentence!

29. When A School Of Law Called Out Rob Kardashian For Claiming He Was Going There

We love to see institutions calling out celebrities on their BS. Such was the case with Rob Kardashian, who made a post about how he was so excited to be going to University of Southern Carolina Law School.. only for the school to wake up and choose violence by calling him out publicly.

30. Lindsay Lohan Giving The Doorway A Big Booty, Too 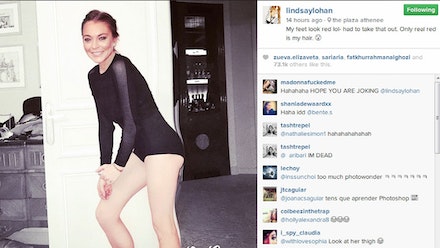 There’s nothing better than a celeb Photoshop fail, especially when they’re trying to make themselves look curvier or skinner. When the actress and child star edited this pic, she accidentally made her curves a little bit too big – big enough to extend away from her body and into the door frame.